Hopefully, you’re smelling something good coming from the kitchen as you’re reading this.

Maybe it’s growing up playing 3A basketball in small-town Texas, but when I think of fine team dining, I think of Furr’s Cafeteria. I assumed that our Red Raiders would be treated to a late Thanksgiving dinner at Furr’s complete with various pies served on cold plates, carrot & raisin salad, and rolls. Google gave me some bad news: 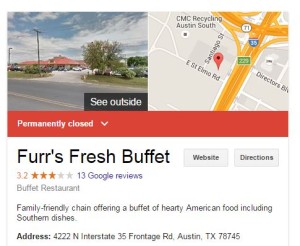 Now, I’m worried about the team. Maybe a nearby food truck will come to their aid. Call your congressman.

Once again, I went to the twitter for some suggestions of places to grub in Austin. Our capitol has to have one of the best food scenes in the country. This list should help get you started, but I hope you’re planning on a long weekend. Thanks to Brian, @skippable, and @AnLiNaDesigns for chiming in.

We would love for you to join us for a pregame party starting at noon on Nov. 26 on the corner of 18th and Trinity (see map below).

For more information on the tailgate and to RSVP check out the Facebook event page.

The Blue Light
The Mulligan Brothers