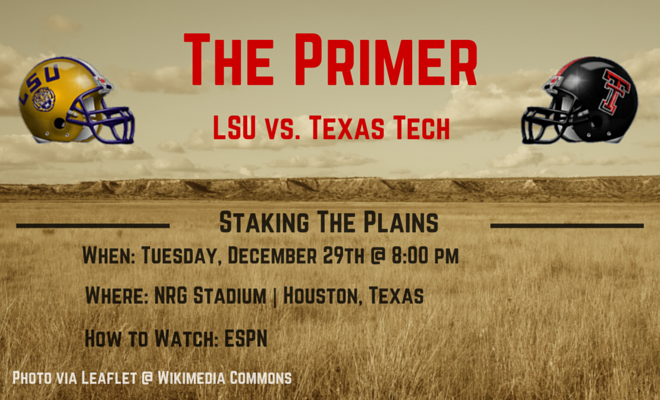 It’s our first look at the LSU Tigers in the Texas Bowl, when, where and how to watch, plus key players and Vegas odds.

Last Week: It wasn’t exactly last week, but the last time out, LSU beat Texas A&M to save Les Miles’ job, 19-7 (ESPN box score). LSU “struggled” through the last half of the season with losses to Alabama, Arkansas and Mississippi, all in a row, before beating the Aggies.

What’s at Stake: For LSU, I think the Tigers need to win for Miles’ to an extent, but by beating Texas A&M in the last game of the regular season, it put to bed the rumors of replacing Miles. If anything, I think by winning, it would show that Miles is capable of keeping his team in focus for a team that they know they’re better than (at least on paper). Texas Tech meanwhile, has a lot to overcome because the Tigers are still a top 25 team and Texas Tech has struggled against ranked teams (although Texas Tech did beat Arkansas, was close to TCU, but lost badly to Baylor, Oklahoma and Oklahoma State).

Miscellaneous: LSU is 52nd in total offense and 25th in total defense, so they’re a much more well-rounded team than you’d maybe expect . . . however, in terms of the the offense, LSU is 110th in passing defense and 10th in rushing offense, so that’s the disparity . . . the defense on the other hand is more balanced as they are 24th in rushing defense and 53rd in passing defense . . . surprisingly, LSU is 114th in red zone defense and 72nd in red zone offense (this surprises me) . . . LSU is 101st in first down offense, which is strange and means that they just don’t get a ton of first downs. This doesn’t mean that LSU has a terrible offense, but it is a bit odd . . .