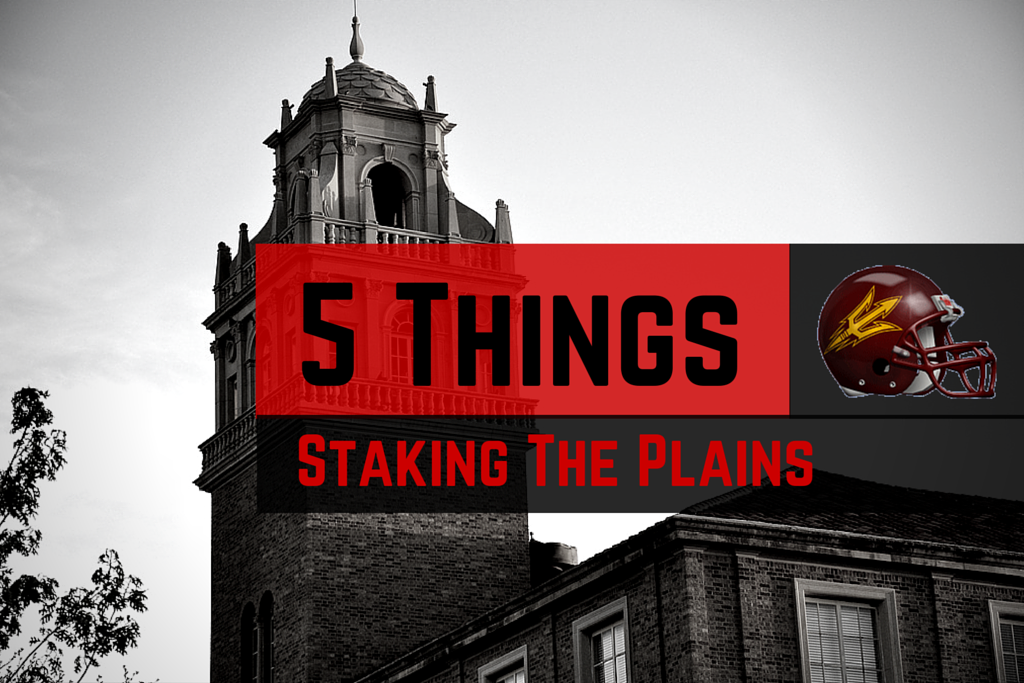 The Red Raiders travel to Tempe, Arizona, to take on Arizona State. Let’s take a closer look at the Sun Devils.

Arizona State will be breaking in a new offense for the most part, graduating is quarterback Mike Bercovici and a slew of receivers, including Devin Lucien, D.J. Foster and Gary Chambers. They were all big contributors and will be missed. Who does return is Demario Richard a good sized running back who had over 200 carries and over 1000 yards last year. In fact, it wouldn’t surprise me to see Arizona State really focus on the rushing aspect of their offense.

And I suppose we really aren’t sure what we’ll get out of the offense just yet. ASU hired Chip Lindsey, who turned down the opportunity to be the head coach at Eastern Kentucky to be the offensive coordinator at ASU. Previously, Lindsey was at Southern Mississippi as the offensive coordinator at Southern Mississippi. Last year, Southern Miss was 12th in total offense and threw for 4,616 yards and ran for 2,500. That’s some pretty good balance between the two, similar to who Texas Tech divided up their offensive output (5,046 passing yards, 2,487 rushing yards).

Much of how ASU performs will be dependent upon who starts at quarterback and from what I can tell, it comes down to two main options, Manny Wilkins (6-3/190) and Brady White (6-2/200). My money, at least at this point, is on Wilkins, who is a quarterback that’s mobile, he’s fast and finds open spaces, and he’s got a big arm and likes to look down field. Just from watching his high school film, he’d prefer to pull the ball down and run rather than throw, didn’t exhibit a ton of patience, but that was three years ago for Wilkins.

Since there are only four starters returning overall, I’m guessing that ASU will have to replace quite a bit on the offensive line. As an aside, there is usually a spring prospectus that each school puts at to cheat off of and there was no such thing with ASU. It made figuring this out that much more difficult.

Keith Patterson is the defensive coordinator for Arizona State and this is his third year as defensive coordinator. Last year was not a great year for the ASU defense as they were 112th in total defense overall, giving up 464 yards a game, and were particularly terrible at passing offense, allowing 338 yards a game, which is good for 127th in the nation. The rushing defense was actually pretty good, only allowing 126 yards a game which was 20th overall. This makes me think that the old adage of “just stop the run and everything will be fine, just fine” may not be entirely accurate. Especially considering the passing efficiency of most teams and ASU gave up an average of 34 points a game last year, which was 99th in the nation.

Patterson arrived at ASU via West Virginia, where he was the defensive coordinator there for a few years. Patterson and Graham’s paths crossed while at Pittsburgh, where Grahama was the head coach for a year and Patterson was the defensive coordinator. I also didn’t know that Patterson was a long-time high school coach in Texas and in Oklahoma, at Allen for a few years and then moving to Ardmore in Oklahoma before moving on to Tulsa to start his collegiate-coaching career.

I think what we’ll see from Patterson and Arizona State is the 3-5-3 alignment, at least that’s what he ran in Tulsa and from what I can tell, Patterson isn’t asking his defensive line to do a ton, just control their gaps and they aren’t running upfield a ton, but the linebackers are the guys that get all of the action. ASU had 46 sacks last year, which was good for 3rd in the nation, so it appears that they are a team that will try to make a big play through a sack, but obviously give up a ton of passing plays as well.

From a player perspective, the defense will be led by the linebackers who return, Salamo Fiso and Christian Sam (6-1/240) who led the team in tackles, 99 and 97 respectively. A bright spot in the secondary is cornerback Kareem Orr (5-11/195) and on the defensive line should be a familiar name, Joseph Wicker (6-3/275) should start at one defensive end. Wicker essentially chose between Texas Tech and Arizona State on National Signing Day a couple of years ago. I should also mention that Arizona State was also great getting behind the line of scrimmage, with 111 tackles for a loss last year, that was 3rd in the nation last year.

Arizona State was okay at turnover margin, +0.15 per game on the year and that’s just fine I think. I suppose that the thought with such an aggressive defense is that at some point, that aggressive defense is going to pay off with big-time turnovers. In fact, ASU and Texas Tech both had the same turnover margin at +2. Should also note that Arizona State was not a team that was heavily penalized, just 12th in the nation overall.

The biggest thing about ASU is the fact that they weren’t terrible on ofense, but decided to replace their offensive coordinator anyway. ASU was 24th in total offense and 32nd in scoring offense. Again, that’s not terrible, and from what I can tell, ASU’s biggest problems was big passing plays, not the production of the offense overall. But Patterson and Graham are old college teammates and it’s more difficult to fire your friends. Texas Tech fans know that all too well.

It will be interesting to see how Arizona State looks in their first warm-up game against Northern Arizona. The Sun Devils will be at home for both of these games, so they have an advantage there of not having to travel to start the season. There’s just so much unknown about Arizona State and what they’ll do offensively that it’s tough to get a handle on what they’ll be. Coming off of a losing season, changes had to be made and Graham decided that they needed to be made on offense.

I think we’ll see two offenses that go back and forth, a lot like the Oregon game for ASU or the TCU game for Texas Tech. Statistically, neither of these two teams are terrific defensively and Patrick Mahomes is quite adept at completing big plays offensively. That’s got to be worrisome for Arizona State. As Texas Tech fans, we really won’t know about the defense until after this game. If ASU starts the highly mobile Wilkins, then it could spell trouble for the Red Raiders. Containment will be difficult.