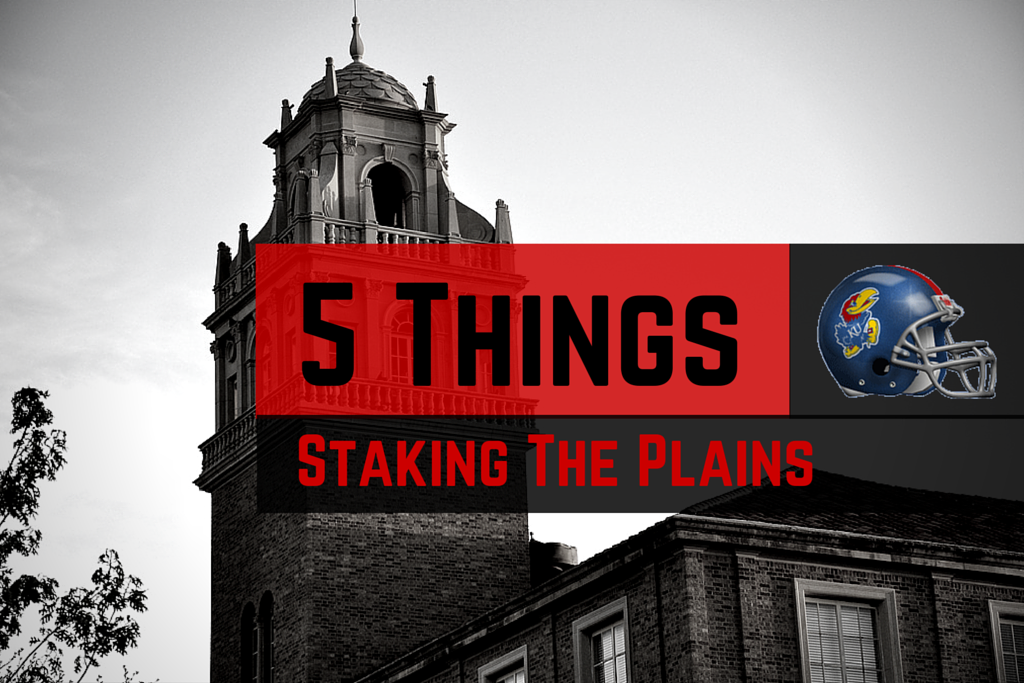 The Kansas Jayhawks look to improve on a winless season last year and will be Texas Tech’s 4th opponent of the year.

The good news is that Kansas is returning a lot of young talent and players this year. The bad news is that the young players and talent in question went 0-12 last year. Really though, Beaty is doing this the right way. Ryan Willis proved to be a pretty decent starting quarterback and he was a true freshman. Willis completed 52% of his passes for 1,700 yards, 9 touchdowns and 10 interceptions. He really did improve as the year progressed, or at least he’d have a good game and then a bad game. Consistency was a problem, but Willis had his best day, statistically speaking, against Texas Tech where he threw for a season high of 330 yards, 2 touchdowns and just one, very costly, interception.

Also returning is running back Ke’aun Kinner, the starter at running back and I’d expect him to carry a bigger load this year. He needs to, just to get some pressure off of Willis. Kansas will need to get more out of their running game and do have other options, Taylor Martin (5-10/200) and J.J. Jolaoso (5-10/205) could also contribute.

In the passing game, Kansas is hoping that Texas A&M transfer LaQuvionte Gonzalez (5-10/176) can be a high impact guy. Gonzalez was a 3-4 star player coming out of high school and I could certainly see him getting some early looks. Also returning is Jeremiah Booker (6-2/202) and Steven Sims, Jr. (5-10/176). Booker caught 23 passes for 228 yards and Sims caught 30 passes for 349 yards.

Kansas does return three offensive linemen, D’Andre Banks, Larry Huges and Jordan Shelley-Smith. From what I can tell, it will probably be other players on the roster that fill in the gaps, not JUCO players. Beaty isn’t taking any short cuts here and if you’re a fan of Kansas football, that’s the right thing to do.

Generally speaking, Kansas was the 114th best offense in the nation, averaging only 332 yards a game, only 113 on the ground and only 219 passing. The passing yards should improve with Willis at the helm for the entire year, presuming he stays healthy. KU also had issues getting the ball into the endzone, averaging only 15 points a game, which was 122nd in the nation.

The defense was, statistically, worse than the offense last year, ranking 127th overall, 124th in rushing defense, allowing 267 yards a game and 123rd in passing yards allowed at 294 yards a game. The scoring defense isn’t any better, allowing 46 points a game and that’s good for 127th overall. I’ve always liked the defensive coordinator, Clint Bowen, buyt the results haven’t been there. I don’t know how long Bowen will last at Kansas, but he is an alum and I think he’s well thought of by the players and coaches.

The bad part is that Kansas has to replace the defensive line except for Daniel Wise, who returns at tackle. I’d imagine that we’ll see more of Dorance Armstrong, Jr. at one end and then probably Anthony Olobia at the other end. That could be halfway decent.

Joe Dineen, Jr. and Macquis Roberts return at linebacker and that’s a good start for the defense. Dineen finished with 86 tackles, 6.5 tackles for loss and 3 sacks to go along with 4 quarterback hurries. Roberts was right behind him, finishing with 71 tackles, 3.5 tackles for loss, 1 sack, 2 fumble recovers and an interception for the Jayhawk defense.

Tevin Shaw and Fish Smithson are the returning safeties. Smithson was pretty good last year and the clear leader of the defense. Shaw wasn’t bad, finishing last year with 65 tackles, a sack and 3 passes broken up. Tyrone Miller, Jr. Marnez Ogletree and Brandon Stewart return at cornerback and Kansas isn’t a team that defends a ton of passes. Miller only had 2 pass break-ups, Ogletree had 5 and Stewart didn’t register one at all. Now that they all have a bit of experience, I’d imagine that they’ll make an attempt to be more disruptive in the passing game.

Kansas could probably make some incremental improvements on defense like Texas Tech, improve on the turnover margin, where Kansas was 79th in turnovers created and if they can cut back on some turnovers, then I think the Jayhawks could win a game here and there. A lot of it is dependent on Willis not throwing interceptions and I’d guess that he’ll be better. Heck, Willis and Kansas was 69th last year in passing offense, so yeah, they’ll be better.

One other really bright spot, but never would have expected is that Kansas was 27th in red zone defense last year. Seriously, that’s just terrific. I don’t know what I’d do to get that sort of defense in the redzone. Of course, the alternate is probably also true in that teams were scoring at will from pretty much everywhere outside of the red zone but still.

With this game being in Lubbock, I still like Texas Tech quite a bit here. The results may not prove it, but Kansas is getting better and I think Beaty is doing things the right way, which is to recruit high school players and fill in gaps with JUCO players on an as-needed-basis rather than wholesale JUCO players only to leave the team extremely inexperienced in two years like Charlie Weiss.

Mahomes gives Texas Tech an automatic advantage and it’s going to take time for Willis to figure out how to do this on the road. Heck, Mahomes on the road last year was much different than at home. It just is and that’s part of the maturation process.