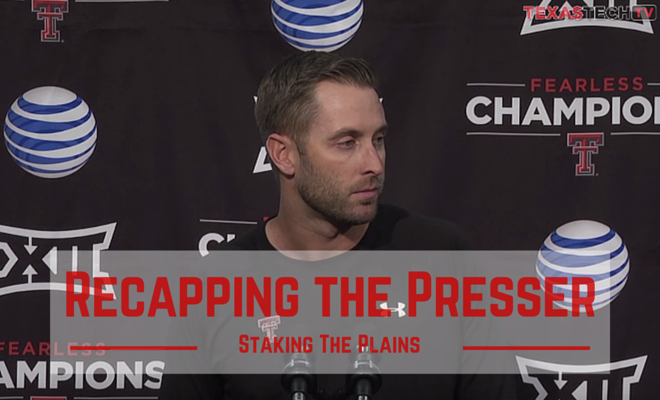 Winning a game sure does feel good, doesn’t it? This team is still yet to turn in a complete game, all aspects effort, but the defense held TCU to 17 points in regulation and the offense did enough to win the game. Kingsbury shifted his play calls more towards the run, especially with the defensive front Gary Patterson was showing with only 5 defenders in the box. Mahomes wasn’t too sharp throwing the ball, and he took a hit on the last play that put a scare into everybody, but it seems he didn’t reinjure his shoulder.

Real early, he’s asked about the health of Mahomes. This is obviously something everyone is interested as Mahomes is a large part of the success of this team and everybody believes he gives Tech the best chance to win, especially when you have defensive players saying they are trying to injure Mahomes

He’s good. He’s good! The best he’s been. So I think it scared him. He landed right on it. I’m sure there was some pain, but he sounds like he will be able to practice almost a full week so that should help. Just not being able to throw with the velocity during the week in practice has affected some things, but sounds like we’ll have a better week this week.

Mahomes still hasn’t practiced a full week since the initial injury, but it sounds like he’s doing more every week.

Kingsbury then praises the defense for their effort, something the fans are pleased to see appear on the field, something Kingsbury specifically attributes to the defense taking offense to everyone saying they can’t improve.

I think just, you know, the tremendous effort. There was many times they were put in bad situations and stood up and found a way to get a stop or hold ’em to a field goal that was missed. That had not been the case in the past when we were in tough situations we didn’t always handle it as well as we would have liked and they stood up and made plays over and over and over and gave us a chance to stay in the game…I think just an attitude. You sit around all week and hear things and you either get pissed off and do something about it or you pout and get worse, and I think they got mad and took it personal and wanted to prove that they could improve and they definitely showed improvement.

Many of you noticed that neither Devin Lauderdale nor Gary Moore traveled with the team to Fort Worth this past week. Kingsbury was asked about both of them and they are being held out for now as a coach’s decision. There is obviously something else going on here, as this was not injury related.

One of the last thing Kingsbury addresses is a question on whether or not he thinks this week will be Mahomes’ last home game as a Red Raider (as he might declare for the NFL draft after the season).

We’ll see. I hope not. He’s got four games left in this season, hopefully five. And our goal is to make sure he plays at the highest level he can, and like I said, the shoulder deal, hopefully this is the last week that we have to deal with it. Hopefully it’s healed up completely after this week and he can continue playing at a really high level.

I saw some comments from media types around Lubbock on Monday say that this is pretty telling that Mahomes is likely out after this season. I would disagree, at least to go so far as saying he’s likely gone. Of course, it’s a possibility, but this team is poised to make a move upwards next season. There aren’t a ton of senior leaving and the ones that are leaving are not really key contributors that can’t be replaced. Morales supposedly will not be participating in Senior Day activities, so make of that what you will.

He’s asked early on if there was something that changed with the defense that helped them perform they way they did and Nelson pointed to being more consistent.

I think consistency must be a buzz word around the football training facility and with us as fans. We want consistency with the coaching staff. They want consistency with the players’ efforts. Either way, we saw this defense play consistently well, outside of that first drive for TCU where they drove 99.9 yards and scored their first TD. We saw them give up a fake punt where the punter ran for a first down, and then the defense immediately responded with forcing a three and out. How often would we have seen a Tech defense pack it in when they give up a big play and have momentum swing against them? In my mind, the sequence following the fake punt was probably the biggest high point in the game for me, defensively.

It was good coverage. The receiver made a great catch. So if you make guys earn it like that, there is not much more you can do. But leaving that in the past, you know, came back, made some great plays and like you said, just being consistent, trying not to ride that emotional roller coaster.

That catch that the TCU receiver made over Douglas Coleman is something that you’re just going to have to live with sometimes. Not many times are you going to see tighter coverage the receiver be able to make a play like that Desmon Smith did on his way out of the end zone and to the ground. You can argue that maybe Coleman might have had a better shot at making a play on the ball had he turned his head around and found the ball in the air, but you really couldn’t have asked for better coverage. He gave Smith zero room and even had one of his arms between Smith’s arms and his body, forcing Smith to make the catch the way he did. Nine times out of 10, the DB knocks the ball out of the WR’s hands there. But when you are being consistent and mentally tough, you get over plays like that and respond by forcing TCU into a FG try on the next OT possession.

One of the last things Batson is asked about is the huddle on the sideline before the last offensive possession before the end of regulation. He gives a little glimpse of the drama of the situation – very movie-esque.

Before the huddle a lot of guys were fired up on the sideline because you can’t hold your head down in those situations. The defense, they did a great job. So in that huddle, you know, Kingsbury said this is the one. We definitely have to get a touchdown in this situation if we want to win this game. We definitely got it done!

For some reason, I just picture the coaching staff from Remember the Titans huddling up on the sideline, firing up the team saying, “We need this one! We need a touchdown here if we even think we want to win this game!” And then of course the Tech offense goes on one of its most methodical drives under Kliff Kingsbury, where the offense goes 80 yards over 16 plays, where 12 of the 16 were runs and the offense drains off nearly 7 minutes of game clock. In a situation where you don’t want to leave much time for your defense to be left on the field, Kingsbury slowed things down.

Finally, Batson is asked about the rivalry with Texas, and how he as an Oklahoma kid, has never liked Texas.

Means a lot being an Oklahoma kid we definitely didn’t like Texas at all. You come here. They don’t like Texas, so it’s a win-win situation. So we will definitely have some fun out there Saturday night.