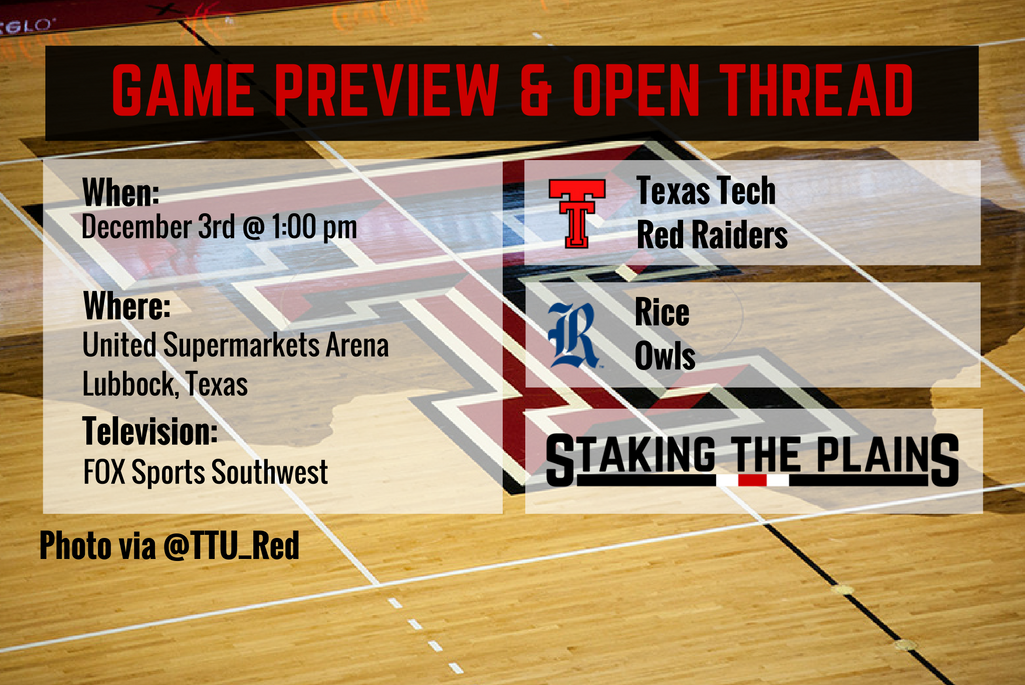 Your preview as the Red Raiders host the Rice Owls.

1. KenPom has Rice as the 109th best team, 72nd in AdjO and 185th in AdjD. Those are some of the better numbers that Texas Tech has faced, aside from Auburn, which didn’t turn out the way Texas Tech wanted. Texas Tech is 31st overall, 46th in AdjO and 21st in AdjD.

2. Rice has played both Houston Baptist Incarnate Word, beating the Huskies by 23 and the Cardinals by 8. Those are two common opponents, one where Texas Tech won against UIW by 21 and beat HBU as 26. As an aside, Texas Tech is a 13 point favorite.

3. Evans is Rice’s best player, shooting 47% from the floor while scoring 22 points a game and shooting 37% from the three-point line. That’s some solid numbers and whoever is guarding him, will need to keep him tight. Koulechov averages those 18 points on 52% shooting and when he does shoot from deep, he’s hitting at 53% all the while grabbing 8 rebounds. That should be a fantastic match-up with Smith. I think those are the keys to the Rice offense going.

4. LAJ’s Krista Pirtle profiles Zach Smith and how he’s changed from last year to this year and head coach Chris Beard talked about his power forward:

“Athletically, he’s as good as advertised,” Beard said. “He’s one of the better athletes inch for inch in the country. But he’s more than an athlete. He’s a really good passer, a good defender. There are a lot of things Zach can do on the floor other than just being an athlete. We’re encouraging him and emphasizing these things to him. He’s buying in.”

5. Beard talks about the Owls, and how this may be the best Rice team he has seen. Thinks that Evans is a future NBA player and that the Red Raiders will have their hands full. Should be a great game.