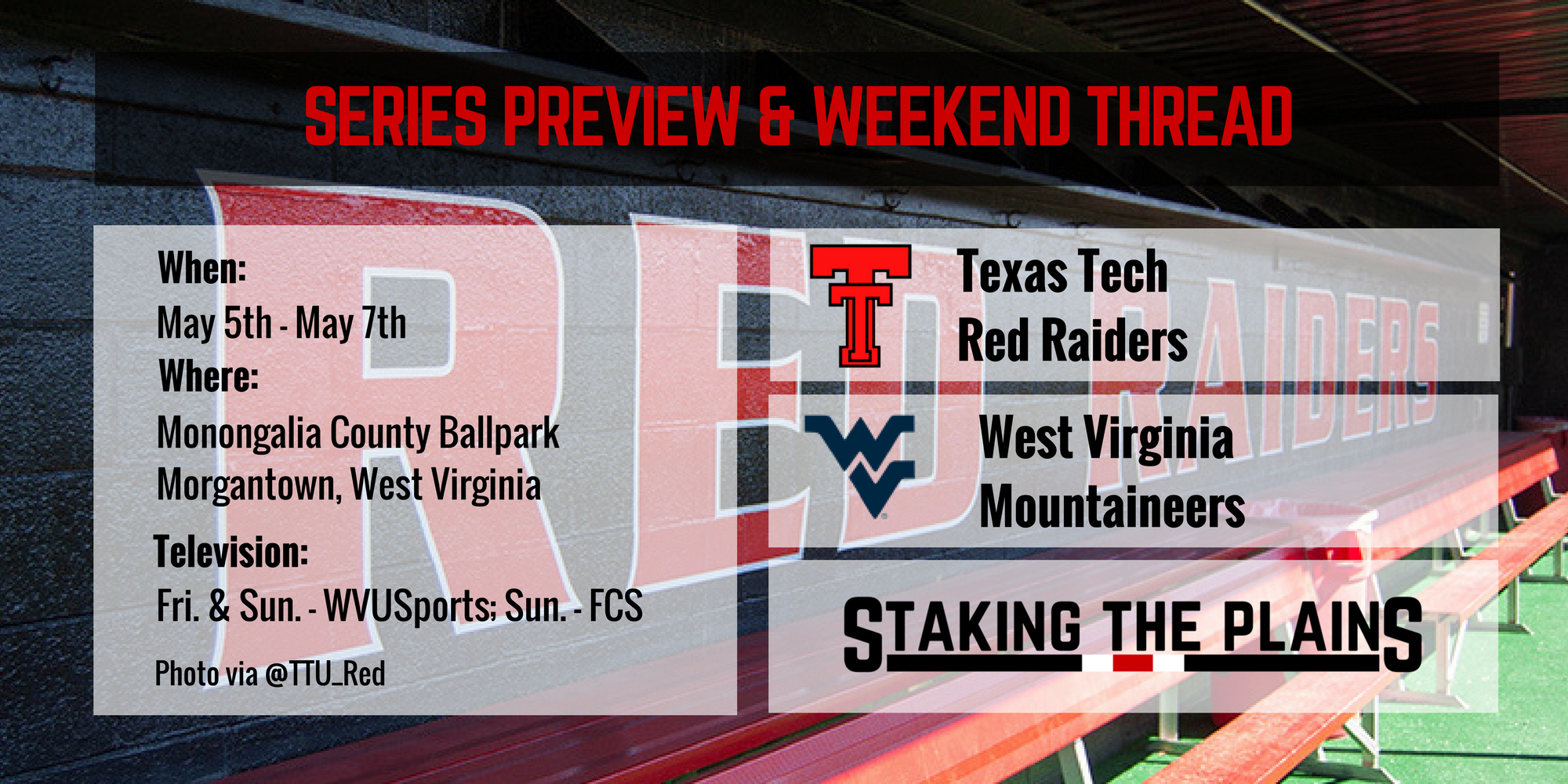 West Virginia has been the surprise of the conference. They win the series from then No. 23 Oklahoma State, then took the series from Kansas, then took 2 of 3 from TCU before losing the series to Kansas state and Oklahoma last weekend. West Virginia is a very good club, probably a year ahead of where they thought they might be, and to win a series at TCU is a pretty big deal. They hit well, have plenty of power, hold opponents to about the same average as Texas Tech, both teams have similar ERA’s as well as strikeout and walk numbers.

This is not a team where you presume anything other than a hard-fought series.

And the other interesting thing is that West Virginia has ten Texas kids on their team and their head coach, Randy Mazey was an assistant coach at TCU before getting the head coaching job at West Virginia. He knows how to mine that terrific Texas talent.

LAJ’s Nicholas Talbot previews the series with West Virginia and writes about how different members of the team, like Brian Klein and Cody Farhat, have helped pick up this team when the starters were injured:

“(Farhat) has shown up every day and we always knew he had that in him, but with Tanner being out it has given him an opportunity,” Tech shortstop Orlando Garcia said. “He has taken the role and done really well and Klein with Mike out, too.”

“Throughout the year we have used Brian against the better pitching and he continues to give us really good at-bats,” Tadlock said. “There just hasn’t been a lot of opportunities because, obviously, Michael Davis is a pretty good college second baseman.

“All along, though, we thought Brian Klein could swing the bat and separate balls and strikes.”

WVMetroNews’ Allan Taylor looks at the series and please note that West Virginia is down two of their weekend starters:

The No. 6 Red Raiders, currently leading the Big 12 in seven major offensive categories, visit West Virginia on Friday to open a three-game series matching the second- and third-place teams in the league standings.

With ERA leader Michael Grove still sidelined by a forearm strain, the Mountaineers (26-17, 10-8) have only one of their original weekend starters healthy. That compounds the need for coach Randy Mazey to juggle his usage of an erratic bullpen.

“With the depth of their lineup, every guy in there is capable of hitting a homer,” Mazey said. “That always scares you if you make a mistake.”

Friday night’s game was delayed until Saturday, where Texas Tech and West Virginia had to play a double-header. Tim Tadlock would start Erickson Lanning and Ryan Shetter and save ace Steven Gingery for Sunday, which could work out fantastically.

Lanning started this first game and he went 6 innings, only allowing 2 hits, walking 2 and striking out 1, to move to 3-1 on the year. Maybe his best performance of the year. Jacob Patterson earned his first save of the year, going the final 3 innings without allowing a hit, walking 1 and striking out 4. Lanning threw 45 of 80 for strikes and Patterson threw 20 of 34 for strikes.

The only run of the game came in the 5th inning as Grant Little doubled to left field to drive in Cody Farhat. Tanner Gardner started at DH and went 1-3 with a walk and there were just 7 hits total, but just that 1 run, which is all that Texas Tech would need.

While looking at the strikes thrown in the previous game, the staff did a good job of throwing strikes , Shetter threw 41 of 59 for strikes, Harpenau threw 19 of 35, Quezada threw 21 of 31 and Mushinski threw 4 of 8 for strikes.

Ryan Long would double in Michael Davis in the 3rd inning. Orlando Garcia would score on a wild pitch in the 5th inning. Josh Jung would ground into a double-play, but still scored Grant Little. And Cody Farhat would single up the middle to score Garcia to score the go-ahead run. Long would go 2-3 with an RBI. Garcia went 2-3 with 2 runs scored. Farhat continues to rake as he went 3-4 with an RBI.

Steven Gingery isn’t perfect, at least not in terms of a baseball record. Gingery took the loss yesterday to move to 8-1 on the year and wasn’t his normal sharp self allowing 3 runs, although only 1 earned, in 4.2 innings, giving up 6 hits, walking 3 and striking out 5. The team as a whole had 3 errors, but Gingery had two of them and one of those errors essentially accounted for the tying and go-ahead runs in the 5th inning. Caleb Kilian pitched the next 2 frames, allowing 2 hits, walking 2 and striking out 3 and John McMillon finished things off by going 1.1 innings, striking out 2.

The offense just wasn’t cranking, and really, it wasn’t cranking all weekend, scoring 7 total runs Friday, Saturday and Sunday. Ryan Long had the only RBI of the day, and he was 1-4 with a run scored. Michael Davis and Grant Little had multiple hit days, Little going 2-5 and Davis going 2-4.