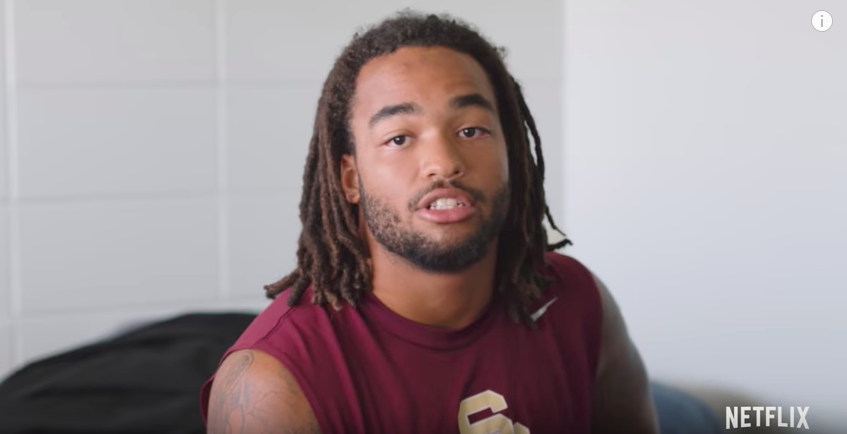 For those of you who don’t have Netflix, Dakota Allen is on Last Chance U, a documentary that chronicles the football team at East Mississippi Community College. The name of the show should be a sufficient explanation, but for those of you who don’t know, EMCC is a place where those players who get kicked out of Division I programs go to rehabilitate themselves to hopefully land at another Division I program. The infractions range from drug charges, poor grades to armed robberies and a myriad of other reasons why you end up at EMCC.

What ended up happening was Allen transferring to EMCC to become part of Last Chance U. Few programs would touch Allen, a robbery, of guns nonetheless, but this was something completely out of character for Allen. I’ve told the story before that I’ve had two different people email me about Allen, both individuals attest to Allen’s character and both emailed be before and after his arrest. This didn’t fit into the character profile of the Allen that they knew and what had happened didn’t make any sense.

If anything, Allen’s path was one of redemption, but he had to go through Scooba, Mississippi first.

Scooba, Mississippi is a place where you go to pay your dues, to pay your penance in order to get back to where you, as a player, eventually want to be. But you’ve got to do your time at EMCC. That’s the less than spectacular dorms, the 100 degree heat running wind sprints, the advisors motivating you to get through your classes, your coaches riding you each and every game. It’s all part of the process at EMCC and you’ve got to go through this, before you can get to that scholarship.

Allen’s first major appearance on the show is where he makes an interception in the first game of the year for EMCC, a huge play and one where they needed all the plays they could get because they were only playing with 32 players this game that EMCC eventually lost. A huge on-the-field brawl the year before ended up ended up in the suspension of every player that was on the field for that brawl, which left only freshmen and transfers like Allen eligible to play.

Later in the first episode, the academic counselor, Brittany Wagner, is on camera and is asked about Allen. She simply does not understand how the act that Allen committed to arrive in Scooba could be from the same player that she knows. Allen is a good student, he doesn’t struggle with grades at all, he in fact helps teach a player a math concept.

Allen doesn’t shine until the fourth episode, where it opens with Allen being baptized in an above-ground pool and the religious overtones become intentional at best with this episode. The next shot is the team singing a hymnal on their way to the locker room. The scene after that is the head coach driving with his Bible on his backseat of his truck.

Allen said that he was mad at himself after he was arrested. He was hanging out with the wrong guys at the wrong time. Allen doesn’t shirk away from his own personal responsibility. He knows what he’s did was wrong. When Allen was at Texas Tech he could only think about the dread of practice and the dread of school, and that attitude has turned into simply being happy to wake up each and every day. Every day is a blessing. Even in Scooba.

I’ve only made it through the first four episodes, but we, fortunately, know how this ends for Allen as of this moment. Allen is back in Lubbock, having earned a scholarship after his year at EMCC.

Redemption can mean two things. It can be the action of saving or being saved from sin, error, or evil. Or, it can be the action of regaining or gaining possession of something in exchange for payment, or clearing a debt. From a personal level, I think Allen has reached that first definition, but second definition seems more appropriate from the perspective of Allen’s life journey.

Allen paid his debt. It’s been cleared. A year in Scooba in exchange for a scholarship with Texas Tech.