Not one repeat as far as the combinations are concerned. 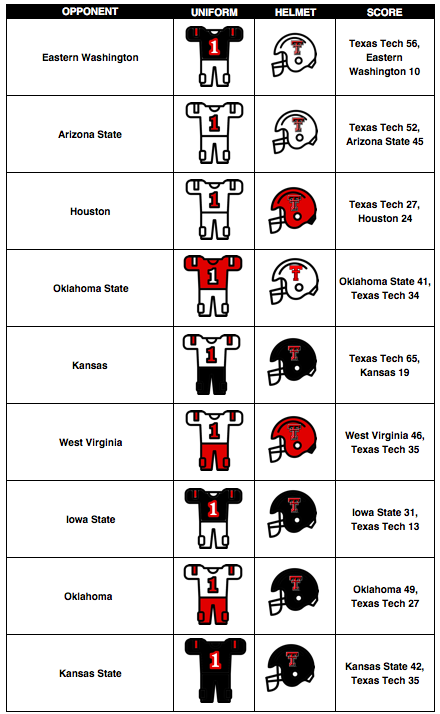 I think if you were to take a poll of fans, you would generaly have Texas Tech fans expecting the absolute worst and bracing for a loss, while Baylor fans are probably hoping for the best and will generally be pretty happy with any outcome. Expectations change everything and it wasn’t very long ago, where perhaps the roles were quite different in that Baylor was expecting to roll the Red Raiders and not let up off the gas. Last year was the first year that the Baylor machine had stopped rolling over the past few years and they were broken enough to where Texas Tech, one of the two teams that had a losing record, absolutely whipped Baylor in Arlington. Last year, I’d definitely say that the rolls were reversed, Baylor was probably expecting the worst and Texas Tech fans were hoping for the best. Nothing to lose at that point.

I try to think back to the quiet confidence that my team would win a game and I haven’t had that feeling in years. That feeling where you know that your team is just better tha the opponent and the best that the opponent can hope for is an upset. That quiet confidence seems have to gone by the wayside, maybe in the span of 0:42 seconds, that bulletproof and 10 feet tall attitude is something that I thought that Kingsbury would never lose. If course, the other way to look at this was that Kingsbury was confident enough to throw away those 0:42 seconds because of his confidence in the overtime against Kansas State, but that seems to go against what most people feel that is incredibly important to this culture, which is don’t ever throw away what has been given to you. Use everything you’ve been given.

I wish I could predict what’s in store for these last three games of the year. The season really has whipped by for me, I’ve blinked and we’re already on week 11 (not the 11th game, but the 11th week for purposes of college football being played).

I’ve mentioned this already in my weekly conversation with Travis, but I think it’s really important to consider that if a change is made, I think it would behoove everyone involved to truly think outside the box. Texas Tech has been an innovator before. Texas Tech has literally changed the game, along with Leach and some coaches before him at smaller schools, but I think it would be something to absolutely change the game again. I’d like to tell you exactly what that is, but I think taking the same formula and trying to repackage it into something that is fresh and exciting to fans is something that will be an incredibly difficult sale. Be bold and be different. Take a real chance to make a difference here.

Brewer is really good at finding one-on-one match-ups that and the Baylor coaching staff is pretty good at creating those opportunities . . . the Baylor offense is varied, some RPO’s it looks like and some opportunities that can be created because they put so much emphasis into the offensive line . . . I’d encourage the oaching staff to not run laterally because it just doesn’t ever work out . . . the Baylor defense definitely likes to pursue, and Texas Tech should probably figure out a way to take advantage of that . . .

I think this first interception is Zach Smith and he obviously shouldn’t be going over the middle like that into triple coverage . . . pressure on Brewer would probably be a really good thing, don’t give him time . . . again with the RPO’s, they can be really effective for the Baylor offense . . . block those defensive backs if you’re Texas Tech, they are susceptible to that . . .

I’ll be interested to see how much pressure that Baylor can get on Shimonek, the stats say that it’s a decent amount in terms of havoc rate for the defensive line . . . that slant for Baylor works really well and they clear the middle of the field pretty well . . . (Stills for WVU is ridiculous) . . . WVU really takes advantage going deep and I don’t htink that Texas Tech typically does a good job of that, will be interesting to see how Baylor plays that . . . Baylor isn’t going to quit, so Texas Tech had better be ready for a full 4 quarters . . .

On who played well against Kansas:

A couple guys stood out that aren’t really getting a ton of attention because they didn’t score touchdowns. I thought our defensive line was fantastic on Saturday. Other than that one long run, they allowed us to stop the run for most of the game. There are just a lot of guys on that group that are rotating in and playing. I’m proud of Ira [Lewis] and Brayvion [Roy] and Greg Roberts and Jamie Jacobs and all those guys—the young guys. Will Jones played his first football and got out there and did a nice job. I thought a lot of guys on the defensive line made a real impact.

Two guys really stood out to me. One was Taylor Young, and I know he didn’t really get any recognition or any awards, but when you watch the film, the film outdid the statistics in terms of how well Taylor played. For him to go from playing ‘will’ to playing ‘mike’ is a major transition and he still had the production that he had. It was one of his finest moments that I’ve seen. The other guy is Jordan Williams. I thought he was huge in the game. [Eric] Ogor went down and [Jalen] Pitre had to go from ‘will’ over to ‘sam’, so Jordan had to come into the game. We’ve always believed in Jordan, but this was his opportunity, and he flew around, hit people, knocked the ball out and was physical. I thought Jordan Williams was the difference for us on defense, with his ability to come in and play.

Finally, I’d be remiss if I didn’t talk about Blake Lynch, and his ability to go in and learn two positions at receiver on offense and have production there, and then also play on defense and special teams. For him to play on all three sides of the ball is something that not a lot of guys can do physically, much less mentally. I think it shows what Blake Lynch is capable of and what he can do. I thought he was really, really special.

A lot of other guys contributed in that game. I thought it was great that we were able to run the ball on 4th-and-1 and convert some third downs. Terence [Williams] did a great job getting out of the backfield and converting some third downs. It was a good team win, and now we have to move on and say what’s next as we prepare for Texas Tech and Coach Kingsbury and their offense and their defense. They’re extremely good at what they do so it’ll be a heck of a challenge, but I think our guys are excited to get back to work and continue the process of getting ready to play this week. So, with that, I’ll see what questions you guys have.”

On the quarterback situation:

“I haven’t really seen if Zach [Smith] can throw yet, so we’ll go out there this afternoon and see. I asked him last night, and he said he was still getting better, but limited. So, I’m sure we’ll go out there today with Charlie [Brewer], and then see what Zach’s able to do. If Zach’s able to do more, maybe we’ll change our thoughts, but if we were to go out and play today, Charlie would be the quarterback.”

On the challenges that Texas Tech presents:

Well offensively, they’re dynamic. They go fast, so they challenge you with tempo. They challenge with you know, they spread the field. They do everything. Coach does a great job. They find a way to run the football. I mean they run the ball. Oklahoma comes out, and they’re running the football up and down the field. They’ve got great players. I don’t want to say his name wrong but Keke Coutee has really kind of torn up everybody that he’s played against. He’s a deep-play threat. It’s going to be a challenge for us defensively. We try to be multiple. We try to play four down, three down. We try to blitz. We try to do all that, but these guys will challenge you. They have an answer for everything, and they do a great job. The quarterback is playing really, really well. They’re as good of an offensive line as we’ve seen. They’re starting a true freshman on the line, Jack Anderson. They’re really, really good at what they do. Then defensively, you know it’s another 3-4 team, and we haven’t had a ton of success against the 3-4 teams. Typically, when we’re a 4-3 team, our offense will sometimes have to really work hard to be good against something that they don’t see every day. That’s the challenge for us this week is to try to get some run-game production versus a 3-4 defense. I think it’ll be a real challenge for both sides of the ball. Obviously, one of the things coming out of last game was our special teams, our kickoff team was not very good at all. Every ball came back out to the 50. You can’t play this offense and give them the ball at the 50, so we’ve got to be better on special teams and just try to find a way to slow them down at some point.

I think Texas Tech *should* win this game easily. There are too many statistical advantages to ignore and I’m predicting a 42-33 sort of game. However, Baylor plays their opponents very close, especially at home and I think their offense is quite different with Brewer at the helm rather than Smith. The defense is going to have to show up this game. At this point, this game is between the ears for Texas Tech and that may be a big problem.