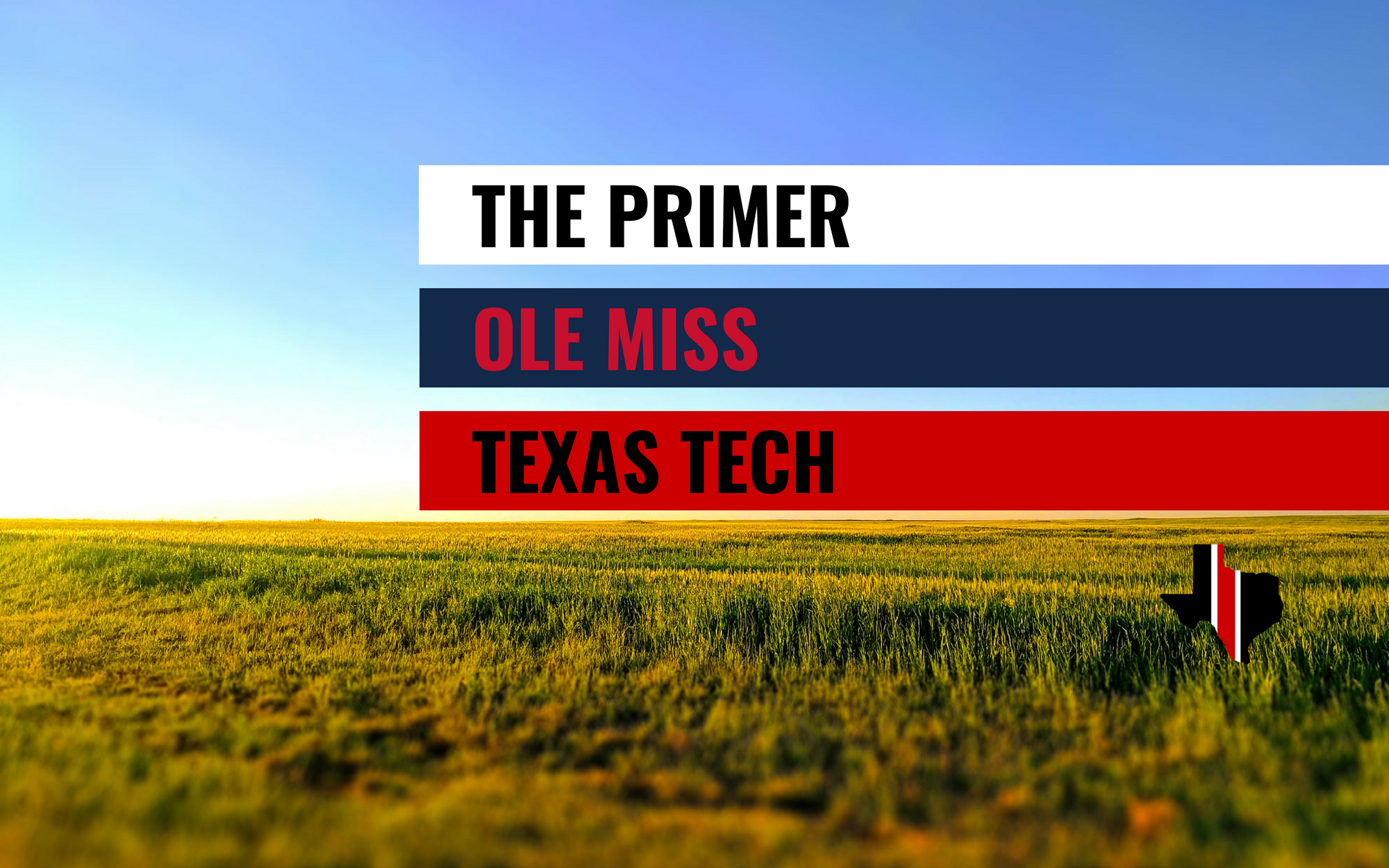 The Line: Texas Tech -2.5 (OddsShark) Looking at the line history, the line opened with Ole Miss favored by 1.5 and has eventually moved to Texas Tech favored by 2, 2.5, and sometimes 3. The best line you can find for Texas Tech is 2 and it just goes up from there. Almost all of the books have settled on 67.5 as the over/under.

Everyone knows what’s at stake.

Kingsbury’s contract runs through 2020, so Hocutt has to render a judgment on his coach at some point in the not-too-distant future. Kingsbury says none of the Red Raiders are insulated from the discussion of what’s at stake.

“I think they’re challenged,” he said. “I think if you live in Lubbock, Texas, you feel where the program’s at and what’s expected. I think that sentiment’s not lost upon our players or our program this day and age.”

Will Flemons and Jason Sasser will know they’re not as young as they used to be every time they open the gym for basketball practice this season.

The former Texas Tech stars are both Texas high school head coaches having the pleasure of coaching their family members on varsity — in Sasser’s case, his son Joshua and nephew Marcus Sasser Jr. at Red Oak; in Flemons’ case, his daughter Caylin at Paducah.

Not only is Flemons the girls’ coach in his hometown, but he’s also the school principal — and not just a school, the whole school: kindergarten through 12th grade. Sasser thought that especially funny, and Flemons made him laugh even harder.

Your alma mater, more than anything, a lot of your relationships you have in your life are based from that university. Some of your best friends, your family all watched you play there. You never really get away from it. It’s always TT all the time. I think that’s probably the toughest thing. All your best friends, your family, it’s all tied up in Texas Tech. There’s really no escaping it.

I’ve never thought there was a ceiling at Tech. It’s a phenomenal college town. Phenomenal fan base out there. You’ve got all those people in West Texas that all rally around the university. It’s just a matter of getting over the hump. We haven’t been able to really get over the hump, win the Big 12 and take that next step that we have to do. Always felt like the sky’s the limit with our fan base, our facilities. I get the location. But there’s places that have done it from remote locations.

The guys have voted.

Here are your 2018 #TexasTech team captains.

Johns, a former Dayton quarterback, has spent most of his career as an assistant in Big Ten country: 16 years at Northwestern and Indiana and last season at Western Michigan of the Mid-American Conference.

Teams Johns has been part of have had five 1,000-yard rushers over the past four years and have made extensive use of the tight-end position. That could mean a more prominent role for players such as Tyler Carr (6-foot-5, 270 pounds), Mason Reed (6-2, 230) or Donta Thompson (6-5, 235). Carr and Reed have played mostly at fullback, and Thompson has been both a tight end and slot receiver.

What defender not named Allen, Johnson or Brooks will have the biggest impact?

Don Williams: Eli Howard made an impressive debut in 2017. Think that’s just the beginning, and he might have an all-Big 12 future.

Carlos Silva Jr.: I really think Broderick Washington is due for a strong season. The junior defensive tackle is expected to plug up some gaps up front, and he’s ready to take on that role and set the tone for the defense.

Mike Graham: Damarcus Fields. Defensive backs help control games, especially in a league like the Big 12. He had 51 tackles and three takeaways as a redshirt freshman last season, and he’s an imposing corner at 200 pounds.

It makes sense, too, because new offensive coordinator Kevin Johns has been part of teams that had five 1,000-yard rushers the past four years, and Red Raiders fullback Tyler Carr is now 6-foot-5 and 270 pounds — a converted defensive lineman in a blocking back’s role.

“All throughout the spring and fall camp, that’s the biggest emphasis we’ve had is, ‘Be more dominant in the run game,’” Steele said. “It’s a change of tendencies. We’re not always passing. Now it’s more they (opponents) don’t know if we’re going to pass or run, so it’ll keep the defense on their heels.”

I don’t have time this morning to do a non-transcript of head coach Kliff Kingsbury’s meeting with the media, but it’s only 6 minutes or so and nothing in there breaking any news.

This is a good question. On Friday evening, SB Nation’s Bill Connelly came out with updated S&P+ projections and the computers say that Ole Miss is the 28th best team in the nation, 6th in S&P+ on offense and 95th on defense. For comparison purposes, Texas Tech is 55th overall, 60th on offense and 52nd on defense. That offense is going to be much better than you probably think for Ole Miss and I wonder if this will be one of those games where it’s a shootout and will the offense can keep pace.

2. Who to Watch on Offense?

I think Jordan Ta’Amu is really good and I think he’ll have a very good season for the RBBLS. And the receivers are going to give the defensive backs a workout. A.J. Brown is a difference maker, while D.K. Metcalf is very good too. the offense going to hum, so be ready for that.

3. Should There Be Anybody to Be Concerned About on Defense?

Well, Ole Miss wasn’t very good on defense and then they graduated some of their better players, so that’s a problem. I’ve struck this because apparently Speaks left early for the NFL, which is great because now, I really don’t think there’s a huge presence along the defensive line. Safety Zedrick Woods is good in the defensive backfield, but he doesn’t get his hands on a bunch of passes and he’s more involved from a run support standpoint.

4. How Does Texas Tech Match Up with Ole Miss’ Strengths?

That’s a pretty good question. The question we don’t know is who are the difference makers on offense and that’s really because we don’t know who the quarterback will be and how successful they’ll be on offense. I’ve always thought that Texas Tech’s shakiest offense was the 2013 offense and Texas Tech was still 23rd in the nation. Two freshman quarterbacks and Kingsbury’s first year as a head coach. And according to S&P+ ratings, last year’s offense was worse, ranked 25th overall. So, with all of that receiving talent, and I think there was a lot there, that was one of Kingsbury’s worst efforts. I think with an improved running game, it’s going to be improved and better than 25.

5. You Didn’t Answer the Question, Who Is Going to Match Up With Ole Miss’ Strengths?

I don’t think Ole Miss has a ton of difference makers on the defensive line and Texas Tech will be able to run effectively. Without a real standout in the secondary, I think the receivers will get open and it’s up to the quarterback to get those guys the ball. The cornerbacks will have their hands full as will the linebackers, I think Ole Miss will put tremendous pressure on the linebackers from an RPO standpoint. Ole Miss’ offensive coordinator is great at getting a power running game rolling and somewhat pinching those guys. We’ll find out really quickly who the fourth cornerback is because we’ll see a bunch of Demarcus Fields, Desmon Smith, Adrian Frye and John Davis, Jr. That’s two very inexperienced guys to be leaning on in the secondary against a very talented RBBLS receiving group. Welcome to college football.