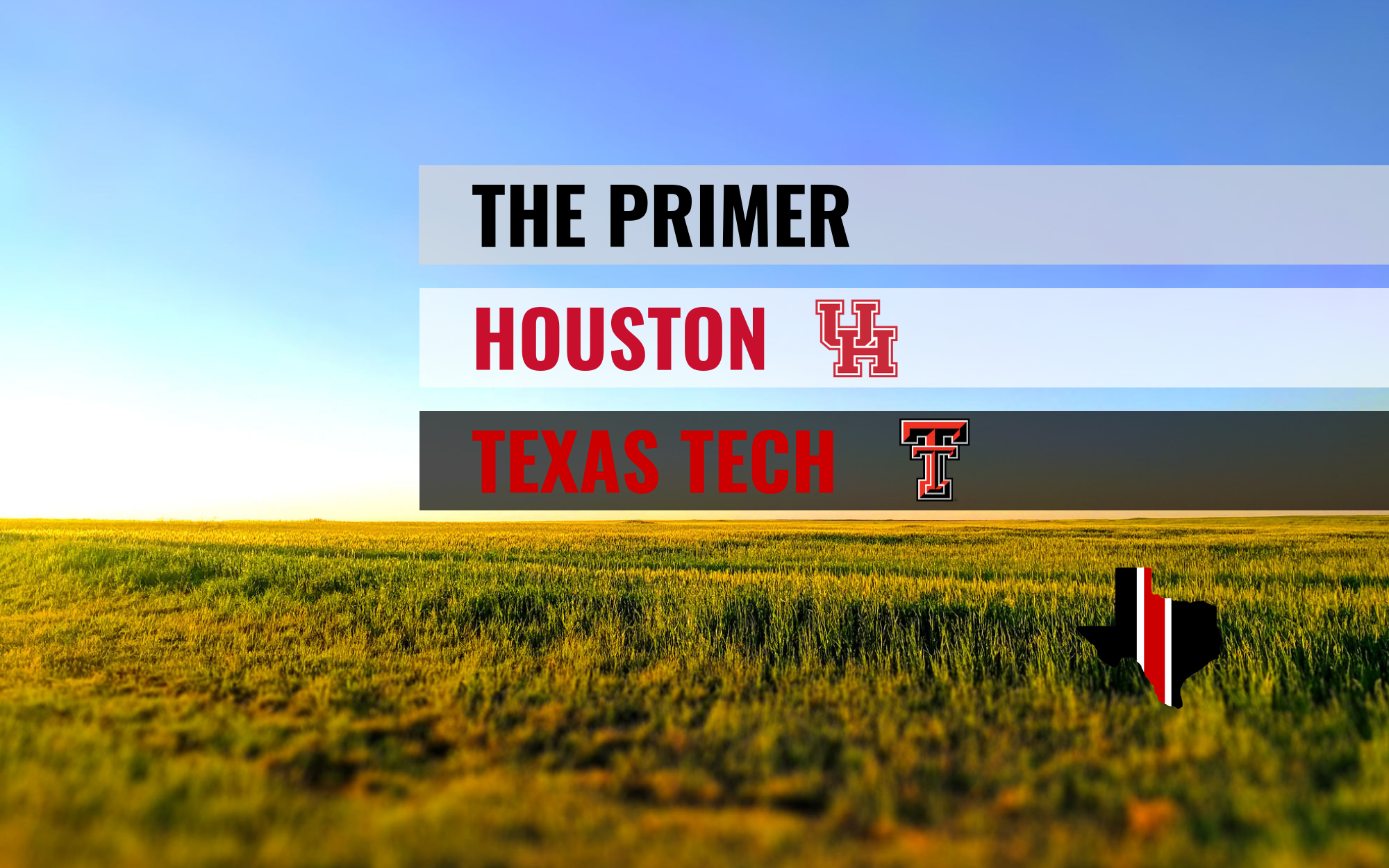 The Cougars come to town.

The Line: Texas Tech -2 (OddsShark). The line opened at Texas Tech -3 and moved to -2 by midnight.

No media availability yesterday, so no links for you.

1. Who has Houston played and what’s up with that logo?

Houston started on the “road” against Rice and won 45-27. Up next, the Cougars hosted Kevin Sumlin and Arizona and Houston curb-stomped the Wildcats, 45-18. Over 551 yards of offense, 297 rushing and 254 passing.

Apparently Houston had an over-beveled logo and then, magically, decided to get rid of the bevel and now they just use the block letters and how terrific does that look. I know that we’re not supposed to praise anything the opponent does, but high fives for the decision makers at Houston to get rid of a fad and go back to your original mark, a plain, interlocked UH. I’m standing right now and clapping, you just can’t see it.

2. How does the Cougar offense look?

Well, against Rice, the Cougars rushed for 257 yards and passed for 320, so that’s your balanced Baylor offense staring right at you. I know that I wrote “Baylor offense” and as you probably know, Kendal Briles is the offensive coordinator at Houston, so he’s brought his Baylor offense to Houston and to be frank, they were devastating, averaging 7.1 yards per carry and 12.8 yards per pass against Rice.

Against Arizona, it was a balanced attack, Terence Williams (yes, the former Baylor player who was dismissed from the team perhaps) had 12 rushes for 65 yards, while Patrick Carr had 8 for 62. Quarterback D’Eriq King ran 5 times for 31 yards and 2 touchdowns, while passing 17 of 34 for 246. That’s not exactly efficient, but that Baylor offense is all about big plays.

3. Can we talk about the Houston defense?

Sure. Against Rice, Houston allowed 439 yards, only 5.2 yards per pay, which is okay, 147 yards on the ground and 292 yards passing. It is strange to think of Rice as a passing team, but I think they’re moving that direction. Anyway, Rice was actually ahead 27-17 one drive into the second half and then Houston turned up the defense and turned on the offense, scoring 28 straight points to then shut out Rice the rest of the way. Against Arizona, the Cougars allowed 531 toal yards and something I don’t understand is that he’s effectively tried to turn Khalil Tate into a passer, one of the more dangerous running quarterbacks in college football, Sumlin has effectively neutered. UH allowed 381 passing yards on 28 of 50, but Arizona had 2 interceptions and lost a fumble, while Houston didn’t turn the ball over at all. It’s also important to keep in mind that Houston pitched a shutout until there was 3:22 left in the third quarter when Arizona put their first points on the board, a field goal, making the score 38-3. So, the defense really sort of relaxed after being up by 5 touchdowns and there’s a really good chance that Houston had in a bunch of backups at that point.

4. Who should concern me about the Houston offense?

5. And what about some of the players on defense?

Ed Oliver (6-2/292) had 13 tackles his first game against rice and he has 18 on the year including 4 tackles for a loss and 6 quarterback hurries. Austin Robinson (6-3//240) and Roman Brown (6-2/230) are your leading tacklers, each with 19. Houston runs 3 down linemen with Leon Godfrey as the outside linebacker, so I’d guess that they’re similar to what Texas Tech does with Tony Jones and Kolin Hill.