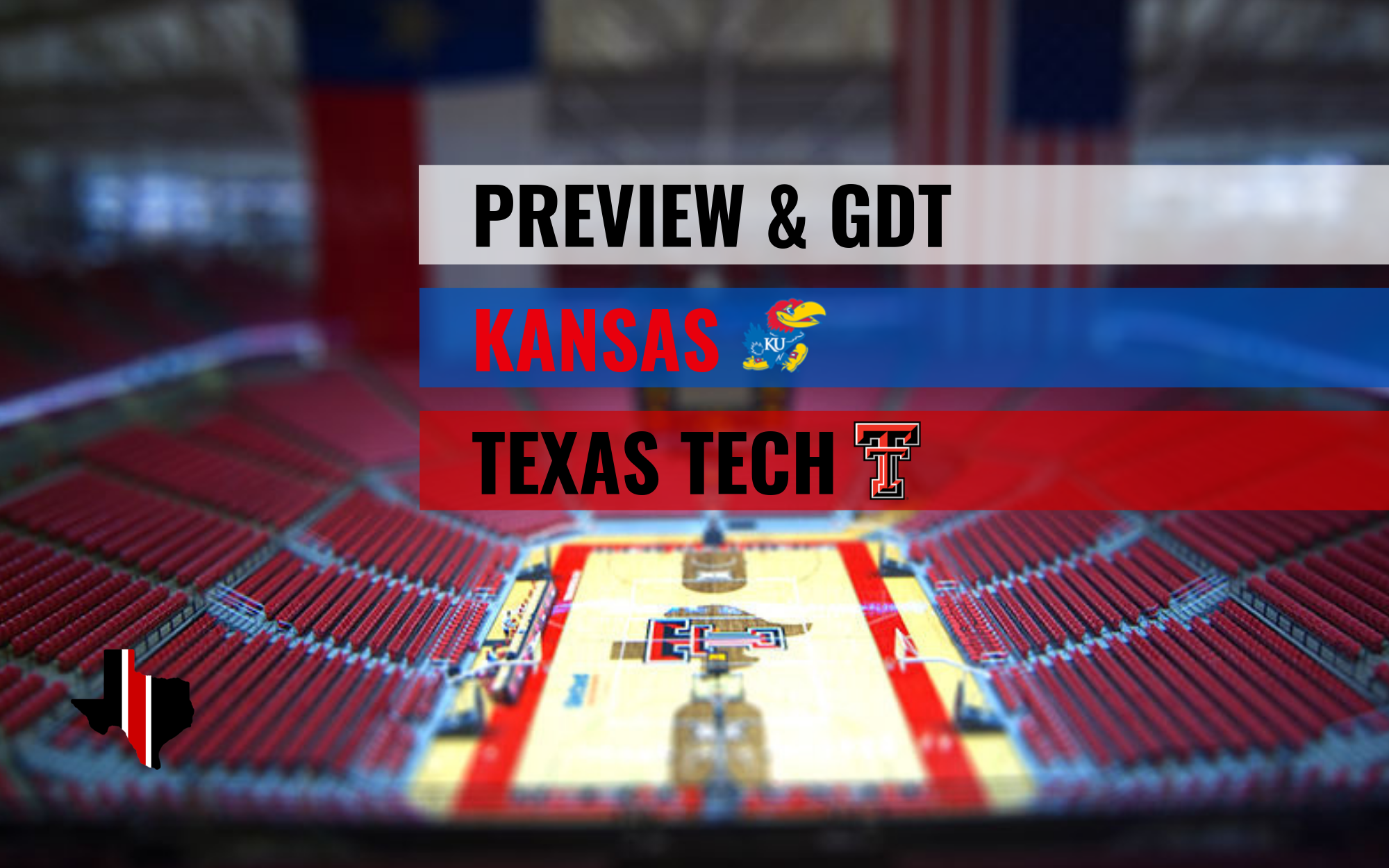 1. Stats. The most interesting thing about the stats is how the offense has jumped 30 or 40 spots in terms of efficiency, in the 100’s a few weeks ago, but getting some good offensive performances against Oklahoma State and Baylor have improved things dramatically. This has been a strange schedule in that the top half of the season didn’t feature bottom-dweller Oklahoma State until the second half. Kansas statistics are consistently good, the defense continues to be elite despite not having a dominant big man inside. They’re so good at defense (except on the road).

2. Scouting. Dedric Lawson is still having a terrific season, is a dominant player in terms of usage and offensive play. Just fantastic. Can shoot outside and can deal inside as well. Dotson is a freshman who has improved dramatically and although having not played a ton of time, Agbaji has been really good despite only playing the spring semester. I think it is clear that Lawson, Dotson, and Agbaji are the Jayhawks’ best offensive players. I should also add that despite losing Udoka Azubuike, they still have David McCormack who is a very athletic freshman and Lightfoot has had an increased role as well. Oh, and Garrett is not the 10th best player, but he’s a game-time decision and I’d have to guess that he gets some burn for the Jayhawks. He’ll be dressed for sure.

3. How They Match Up. Despite whatever you have read, Kansas has McDonald All-Americans up and down their roster. On paper, they are a better team. They have a near-Texas Tech level defense, but their offense is very good too. The weird thing for the Jayhawks is that they are not so great on the road, this started with a road loss at Iowa State, which is okay, but then lost to West Virginia on the road, Kentucky, Texas, and Kansas State all on the road. the only head-scratcher is West Virginia and the other kind of make sense. Those aren’t terrible teams. Overall, Kansas is 2-6 on the road for the year and they are 2-6 against the spread on the road and are 1-4 as an underdog this year. The odds would seem to be very much in favor of Texas Tech given these statistics, especially if you consider that the Red Raiders are 15-1 at home, 19-2 as a favorite, and the weird statistic is that Texas Tech is 7-8-1 against the spread at home. The implications for this game are huge because if either one of these teams wants to win the Big 12 title, this game is hugely important.

“I just remember (that) we didn’t come out to play,” said Mooney, alluding to a 79-63 loss to the Jayhawks a couple of weeks ago. “We were down 10-2, I believe. And they were up 20 on us at half. It was kind of embarrassing. So, we definitely have that in the back of our minds going into this game.”

Owens, who leads the team with 63 blocks this season, agreed and feels the players must take a better approach when it comes to mental side heading into Saturday night’s tilt.

“As the seniors on this team, we have to get guys ready to play,” said Owens, a senior graduate transfer from St. John’s who was named one of 10 semifinalist for the 2019 Naismith Defensive Player of the Year Award. “And last time we played them, we kind of failed in that aspect of it. It’s been a big focus, you know, this week leading up to the game. Just getting everybody focused, mentally ready. It’s very exciting. It’s a great moment. This is why we all came here, to play in games like this.”

“My favorite memory of him playing would be at Texas Tech last year,” Self said of Graham. “They had us beat. He went and scored 14 points on his own (in crunch time). He just willed us to win.

“We’re going to have to have somebody else do that as well,” Self said, looking for candidates on the 2018-19 KU roster to emerge as heroes during this weekend’s equally-important return trip to Lubbock. “When you play defense like Tech does, you’ve got to rely on players to go make individual plays like Devonté did for us last year.”

To put what’s above in the most simple terms: When teams have a higher three-point rate against KU (in other words when a higher percentage of a team’s shots are three-point attempts), the Jayhawks’ defense (adjusted for opponent and location) has been worse.

Individual results give more context. The best game against KU’s defense came from Texas during its 80-78 loss at Allen Fieldhouse, when 34 of the Longhorns’ 69 shots were from three-point range.

“In this league, you’re going to see a lot of different (ball-screen) coverages, depending on the team,” Texas coach Shaka Smart said after the game. “Tonight, the way Kansas defended it, they always do such a great job with their hands, but we tried to put our shooters in spots if, the guard could deliver the ball, they would get an open shot.”

Kansas cruised to a 16-point win in Lawrence the first time these teams played, with the lead reaching as many as 24 points. Kansas held Texas Tech to 0.86 points per possession and made 13 threes, a recipe that’s almost always going to beat defensive-minded teams like the Red Raiders. So how do they turn it around at home? The first key would be to slow the game down. Kansas had 73 possessions and 59 field goal attempts in the season’s first meeting, and that’s not at all the formula Texas Tech wants. Secondly, they’re going to have to make life at least somewhat challenging for Dedric Lawson. He had a field day the first time around, scoring 25 points on 14 field goal attempts, adding 10 rebounds and two blocks. Put simply, a team like Texas Tech cannot beat a team as good as Kansas without making it work much harder for every single bucket it gets.

NBC Sports’ Rob Dauster – Best Bets: Title races will be on the line in the Big 12, SEC, Big Ten and ACC this weekend:

Here’s the catch-22 — Texas Tech usually plays small. They’ll use Jarrett Culver, their all-american and de-facto point guard in the half court, at the four with three guards and one of Tariq Owens or Norense Odiase at the five. If Kansas plays big, that will force Dedric Lawson into guarding Culver, and that would not end well for the Jayhawks. But the flip side is that if they opt to play small — Garrett alongside Devin Dotson, Ochai Agbaji and Quentin Grimes — they’ll be using a lineup that simply did not work well early in the season. The problem with the lineup that had Garrett at the four, which I detailed here, is a lack of spacing created by the inability of Garrett to makes defenses pay for not guarding him.

Texas Tech is the nation’s best defense, and they have already shown a willingness to completely fade guarding someone that isn’t an offensive weapon — see: Jones, Tre. Kansas needs to be willing to shoot and capable of making threes to beat Texas Tech, and without their best shooter on the roster anymore, do you think they’ll be able to do that?

The Red Raiders have outscored their last four conference opponents by a 24.0 scoring margin and lead the nation by limiting opponents to 36.1 percent shooting for the season. TTU, which is the top Big 12 team with a No. 10 NCAA NET Ranking and is at No. 9 in the Pomeroy Ratings, is also second in the country by holding teams to 57.2 points per game and is fourth with opponents being limited to 27.6 percent shooting on 3-pointers. In Big 12 Conference stats, the Red Raiders lead with 7.4 steals per game, turnover margin (3.3), forced turnovers (16.35 per) and are second in blocked shots per game (4.9) and free-throw percentage (71.5). Offensively, Tech is shooting 46.6 as a team which ranks third in the Big 12 and the team is fourth in the conference with 13.9 assists per game.

“I think we prepare for these moments all year long with our process,” Texas Tech coach Chris Beard said. “We always say the biggest game on the schedule is the next game where we can’t get too high or too low. That’s the first thing, just trust in the process that we try to execute every day. Our seniors have the pulse in the locker room. As a coach you can only talk so much to set the stage, but that culture is executed every day by those seniors. I have a lot of faith in our four guys. Thirdly, we like to live in the reality. This is Kansas. This is a 7 p.m. national television game. This is why you come to Texas Tech to play games like this. It’s a fine line between getting yourself ready and living in the moment. You have to be yourself.”