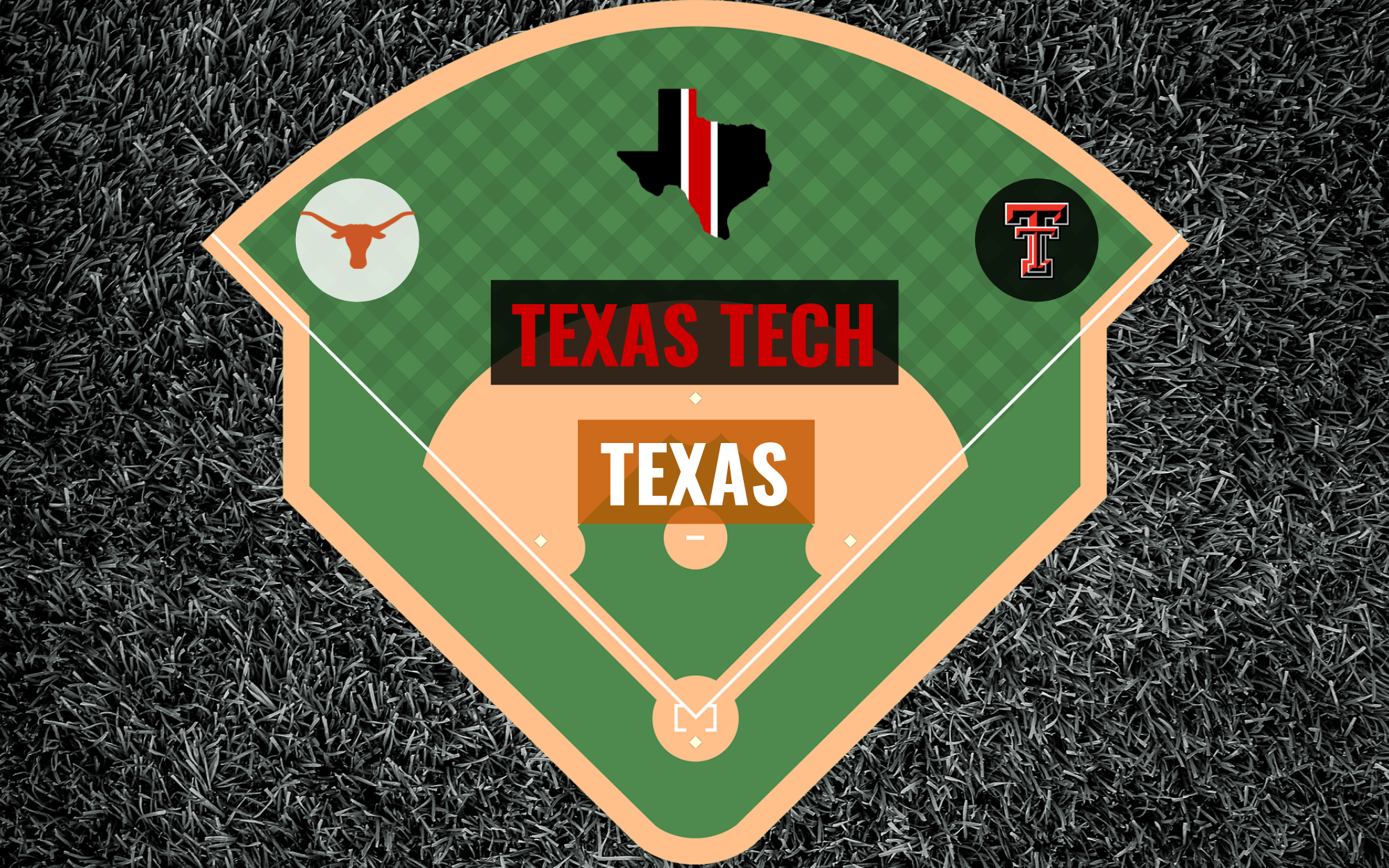 The Longhorns started out of the gate pretty well, taking 2 of 3 from Purdue to open the season, then defeating Sam Houston State pretty handily in a mid-week game, but dropping the next game to UTSA (on back-to-back nights). They then had a series sweep of #2 LSU, 8-1, 8-4, and 7-6, which really vaulted Texas in the polls. A mid-week win against UTRGV set the stage for a 4-game series against Stanford last weekend where the Longhorns dropped 3 of 4 games to the Cardinal with 2 of those 4 losses being 8-1 and 0-9. UT blasted Texas Southern in a mid-week game and now we’ve set the stage for the Red Raiders heading to Austin.

Texas Tech is coming off of a weekend series sweep of Wichita State, where the bats absolutely came out to the park, winning 12-2, 15-10, and 15-4. The 15-10 win was a Caleb Kilian start and he is struggling a bit to find his groove, while Erikson Lanning and Mason Montgomery are pitching pretty well.

If any of that concerns Tadlock, he’s not showing it.

″(He’s) been good,” the Tech coach said. “I thought he was a lot better than his line showed (against Wichita State) last week. Excited about watching him this week. Tough conditions to pitch in the week before in Frisco (against Mississippi State). The other day, being objective about if he located pitches, he did on occasion.

“Obviously, he missed some spots, too, but overall he’s going to give you a chance to win every time he pitches.”

Austin American Statesman’s Danny Davis – Even with the injuries, Texas is feeling comfortable at catcher as Big 12 play begins:

Texas, the Big 12’s regular-season champion in 2018, is defending its crown against stable of steely suitors. None of the conference’s nine baseball programs enter this weekend with a losing record. D1Baseball has No. 11 Texas Tech, No. 12 Texas and No. 21 TCU ranked in its national poll.

Like many of its rivals, Texas heads into conference play with questions that need to be answered. Can the Longhorns find a solution for a .956 fielding percentage that ranks just 243rd nationally? Can they develop more power in the lineup? How will the freshmen fare as the season gets longer and the stakes get bigger?

The Red Raiders took the lead in a three-run 3rd inning but couldn’t hold off the Longhorns who plated one in the 5th and three more in 6th to win the Big 12 opener and the first of the three-game series in Austin. Erikson Lanning got the start on the bump for Tech and was incredibly efficient at 5.0IP, 3H, 1R, 0BB, 0K. Lanning retired the first 12 Longhorn batters of the game in order. He retired 9 batters in only 24 pitches through the 3rd inning.

Texas plated their first run in the 5th after a leadoff double by Zach Zubia was followed by a 1-out single and an RBI sacrifice fly. An unfortunate chain of events in the 6th ultimately put the Longhorns on top. A fielder’s choice followed by a single and a walk loaded the bases. A sacrifice fly by Zach Zubia to right field resulted in a high throw to the plate by Gabe Holt. The fly scored a runner and the E9 advanced remaining runners into scoring position. Then a hard hit ball to third skipped under Josh Jung’s glove out into left field. This E6 scored two unearned runs and the damage was done.

Ty Madden and Kamron Fields combined for 4 innings of relief and struck out six Red Raiders through the final four innings. Texas Tech did not record a hit after the 5th inning. Despite the protestations of those on Twitter, Facebook, and message boards, a 2-error inning wasn’t the doom of the game for the Red Raiders. An inability to handle Texas’ relief pitching and tally hits when needed was the reason Tech ended the evening with an L.

There were brights spots in the evening outside of Lanning’s starting pitching effort. Micah Dallas turned in a strong effort in relief. He went 2.1IP, 0H, 0R, 0BB, 3K in a dominant late effort. Cameron Warren turned in his 5th multi-hit game and 6th multi-RBI game of the season going 3-4 with 2RBI. Warren has recorded an RBI in 5 straight games. Gabe Holt went 2-5, his fourth multi-hit game of the season, and extended his reached safely streak to a career-high 30 games.

Once again starting pitching was the storyline of the game for the Red Raiders. This time the offense battled and finally broke through in the 8th inning for enough to secure the victory and even the series in Austin 1-1. Caleb Kilian got the Saturday start and was exceptional going 7.0IP, 1H, 0R, 2BB, 4K. Kilian only allowed one runner on second base in his outing and no Texas runner got past second until the 9th inning. Clayton Beeter was also special in his relief effort, going 2.0 IP, 0H, 0R, 3BB, 4K. Beeter continued to impress with elite velocity and battled out of a difficult situation in the 9th. After walking the bases loaded with two strikeouts in between, he pitched the go-ahead batter into a flyout in left field to end the game and earn the save.

Gabe Holt was strong once again for the Red Raiders going 1-4, 1R, 1BB, 1SB. Holt drew a walk in the 8th, advanced on a balk, and stole third base before scoring on a Brian Klein sacrifice fly. Holt has now reached safely in 31 games in a row and extended his hitting streak to 10 games. Holt is 11-14 in stolen bases this season and is 40-44 in his career as a Red Raider. On Holt’s scored run he also advanced to second on a balk drawn by his presence and baserunning ability.

Josh Jung came back strong after an uncharacteristic and costly error in the Friday game tallying an exceptional off-balance putout from outside the bag throwing on-target to Cameron Warren. Jung also turned a 5-4-3 double play in the 4th and went 1-4 on the day with a walk.

Cody Masters delivered some timely hitting with a 2 RBI single in the 8th to score Dylan Neuse and Cameron Warren. This was a particularly fun moment as Tim Tadlock didn’t hesitate to send Warren rumbling home from 2nd and his slide was in time punishing the Longhorns for the intentional walk that put him on board in the first base.

Where the Red Raiders often jumped on early pitches in the Friday game, this game we saw them work through long at-bats, drawing 5 walks from starting pitcher Blair Henley.