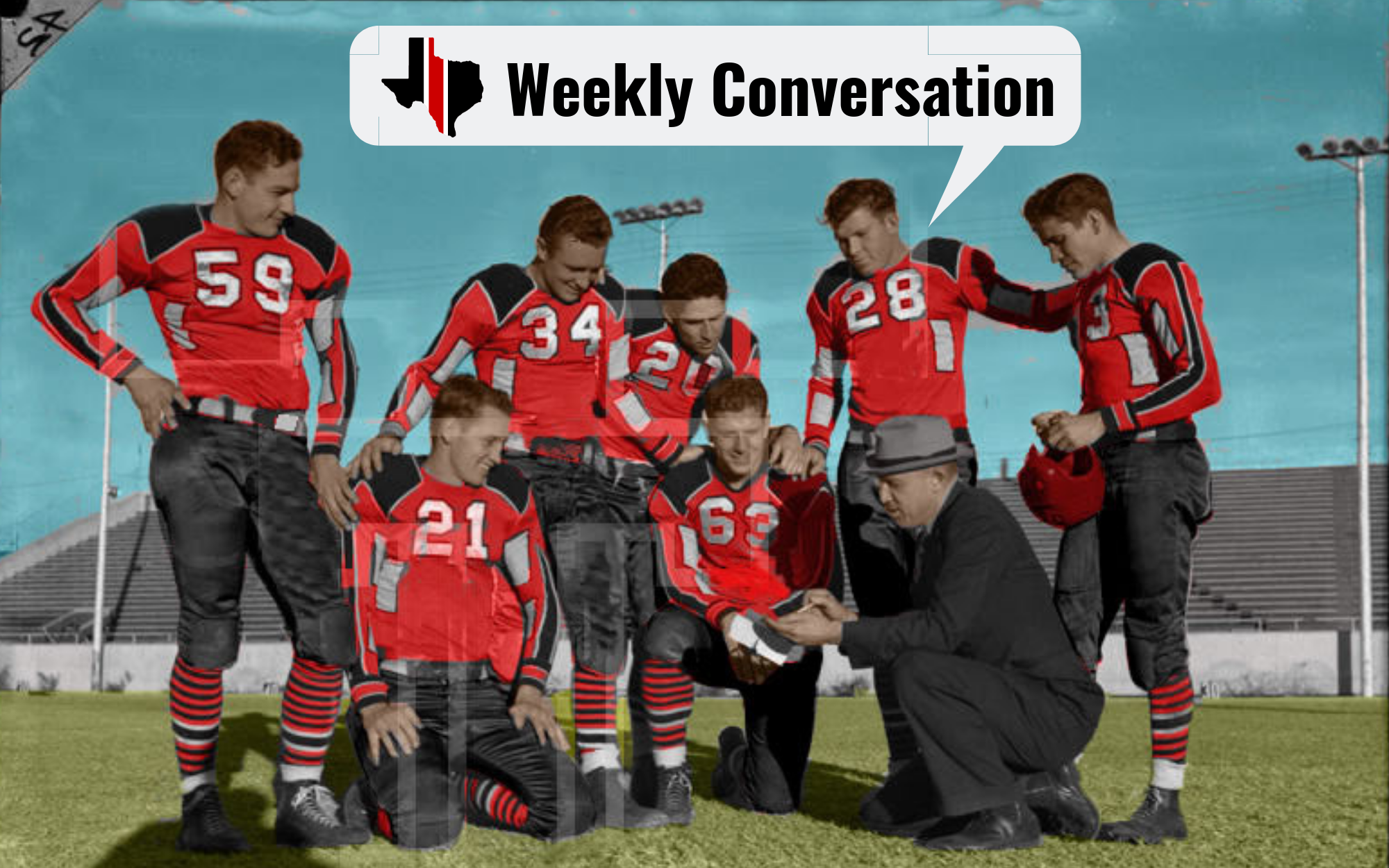 Travis: Saturday was Cade’s tenth birthday so I didn’t get to fully invest in the game but I did catch most of it. The start was fantastic and Bowman looks to be as good as ever. Defense looked sharp (excluding the one breakdown on the long passing TD after the fake punt). Overall I thought it was a great start to the Wells era at Tech. Give me one thing you really liked and maybe one thing that could be a cause for concern later.

Seth: Well, the best thing was that I thought that it was a really complete game. A few bumps in the road, but generally speaking, it was a really clean game overall and it felt like the team was ready. They came out looking like they were ready to play and ready to score, to stop the opposing offense, they were just ready on every level. It’s funny how most of the time, when this team is doing something, like just a few penalties, it’s a shot at Kingsbury and I feel like I need to preface the comment with, “This isn’t a shot at Kingsbury, but . . .” I think it’s a sign of respect for me, I don’t want to offend him, not that he gives two flips about me, but just in case.

In terms of things to work on, I thought that the secondary looked a little shaky, but Montana State is one of those teams where they just don’t pass a ton, so the secondary is playing the run more than the pass, so maybe their performance was just a bit uneven and the couple of big plays weren’t all that bad, but I think the secondary has to prove themselves.

What was your general impression of the Matt Wells era?

Travis: There seemed to be a bit of a workmanlike approach (which, if I’m interpreting that correctly is exactly what you said Hocutt wanted to see). My buddy Keith was over here for the birthday party and he asked me a couple of times which one was Wells, which is certainly a big change from the Kingsbury era. Kliff really enjoyed being the face of the program, for better or worse and there seems to be more of a group approach to things now. And again, as you mentioned, we need to preface everything we say as not a slight to Kingsbury because I’m sure he still regularly reads our convos, but it’s just my observation of things.

So, I really need to get something off my chest. I watch Chopped on the Food Network quite often and I always get angry when at the very end the judges go back through all the courses to determine the champ. The problem is, it’s each round is an elimination so it makes no sense. The champion should be determined based solely on how well they prepared their dessert. It’s like if Tech and Virginia were playing the National Championship game and someone came in and gave the trophy to Tech because they played Michigan so well. It just really bothers me that they are judging it on elimination and then on the final two’s full-body of work. It’s ridiculous.

And I think I’d like to make this a semi-regular feature because I’ve got a lot of grievances to air. What is one of your big pet peeves?

Seth: I read this email in the evening and slept on it trying to think about a peeve and I don’t really shake my fist at the world very much. I think I tend to go through the world sort of doing the opposite, which is to not let things bother me even though they seemingly should bother me. Maybe this is part of where my job and real life intersects in that my job can be very high stress, almost to the point where it makes me incredibly anxious (all of last week). So I tend to just check out when real life hits me. I get home, help the kids with homework and we have reading time together. I don’t watch any television to speak of so there’s nothing on the teevee that’s going to hack me off, even the news (I will watch the weather), so there’s not much there for me to get real angry.

I know that I’m an anomaly and not having any grievances to celebrate Festivus.

Lots of times, we take this opportunity to ask each other about the next opponent and at this point, I’ve barely watched any UTEP video and I have a feeling that you’ve maybe not gotten in your full study session. So I’d like to open the floor here to ask if there’s anything that you’d like to extoll the greatness of, maybe it has something to do with El Paso or burritos or whatever. The floor is yours.

Travis: Well, burritos, especially breakfast burritos, are straight trash and only poseurs and hippies would ever consider them to be anything more than an expensive yet perishable door stop.

I would like to use this space to call my shot and let everyone know that Cash, our seven year-old, is gonna grow up to be the most successful sports agent in history. He plays the Xbox with his brother all the time, but instead of actually playing NBA 2K he just builds teams and then trades them away. Last week he had LeBron, Durant, Harden, Curry and Giannis all on the same team but them traded them off one by one because he was worried about “team chemistry.”

Then on the money side of things he’s ahead of the game, too. A few weeks ago he rummaged through my dresser and found one of my old wooden pens. He asked if I’d sell it to him. I thought about it for a few seconds and, knowing how his mind works and that he wouldn’t let me just give it to him, I told him I’d sell it for 75 cents. He gave me three quarters and promptly went into the next room where he sold the pen to his grandpa for $1.50.

It’s funny (and fulfilling) to watch how your kids grow and adapt to situations and develop their own particular skill sets. Cash, befitting his name, is all about money and making deals. In October we’re going to rent a booth at a farmers’ market and sell pies. It was all his idea (he hatched it on our vacation when he saw how many people stood in line at the pie tent and how many people weren’t standing in line at the tomato tent right next door. His little mind is always spinning, always trying to come up with the next big scheme that’s gonna put some change in his pocket.

If you had to guess right now, what do you think your boys will grow up to be? Do they have any tendencies that you can pinpoint and can play out in your mind to gauge what they’ll be successful at in the future?

Seth: Man, what a great question.

I don’t have a clue about Fitsum. He’s still in his own brain and it’s pretty amazing to watch. He’s still, yes still, all about Legos. His brain is constantly building some sort of robo-snakes, or making a mini-figure into some new warrior, or maybe it’s creating a haunted pirate ship for his robo-snakes and mini-figures. He was asked to write a “hook” and a “central idea”. The thought for the central idea was his favorite place to be. His answer is his room because he has all of his Legos in his room and he can create anything in his imagination in his room with Legos. That’s the God’s-honest truth, he loves his room and he loves his Legos and he loves creating the things in his brain.

Youssouf is dead-set on three things right now. A professional athlete, a policeman, or a carpenter. I won’t go on and on about Youssouf’s athletic ability, but it’s sort of crazy and my biggest goal as his parent is to figure out how to foster that talent. There’s a fine line between trying to make him not just be a great athlete now, but a great athlete in 10 years. Fostering a love of sports without burning him out is a tough thing. He’s never really explained the policeman thing other than some policeman has visited his class at school. The carpenter is because his grandpa, my wife’s dad, and brother-in-law are both carpenters. When Youssouf first came home, he was a little worker. He loved to stack wood, or put wood on a wagon, then haul it off, and then go stack it somewhere else. He’s a worker, he takes criticism really well, especially with his coaches.

I think Youssouf is going to be some sort of athlete. Even if we go to the grocery store, it becomes an opportunity to do some sort of obstacle course or American Ninja Warrior. There’s always a jump, or a hurdle, or sidestep.

Last question. If you had to name a new dog (or cat) after either a Red Raider or something to do with Texas Tech, what would it be? I think I’d go with Keenan.

Travis: Man, I can’t wait for Fitsum to figure out a way to save us all.

And my next dog will hopefully be named KeKe.