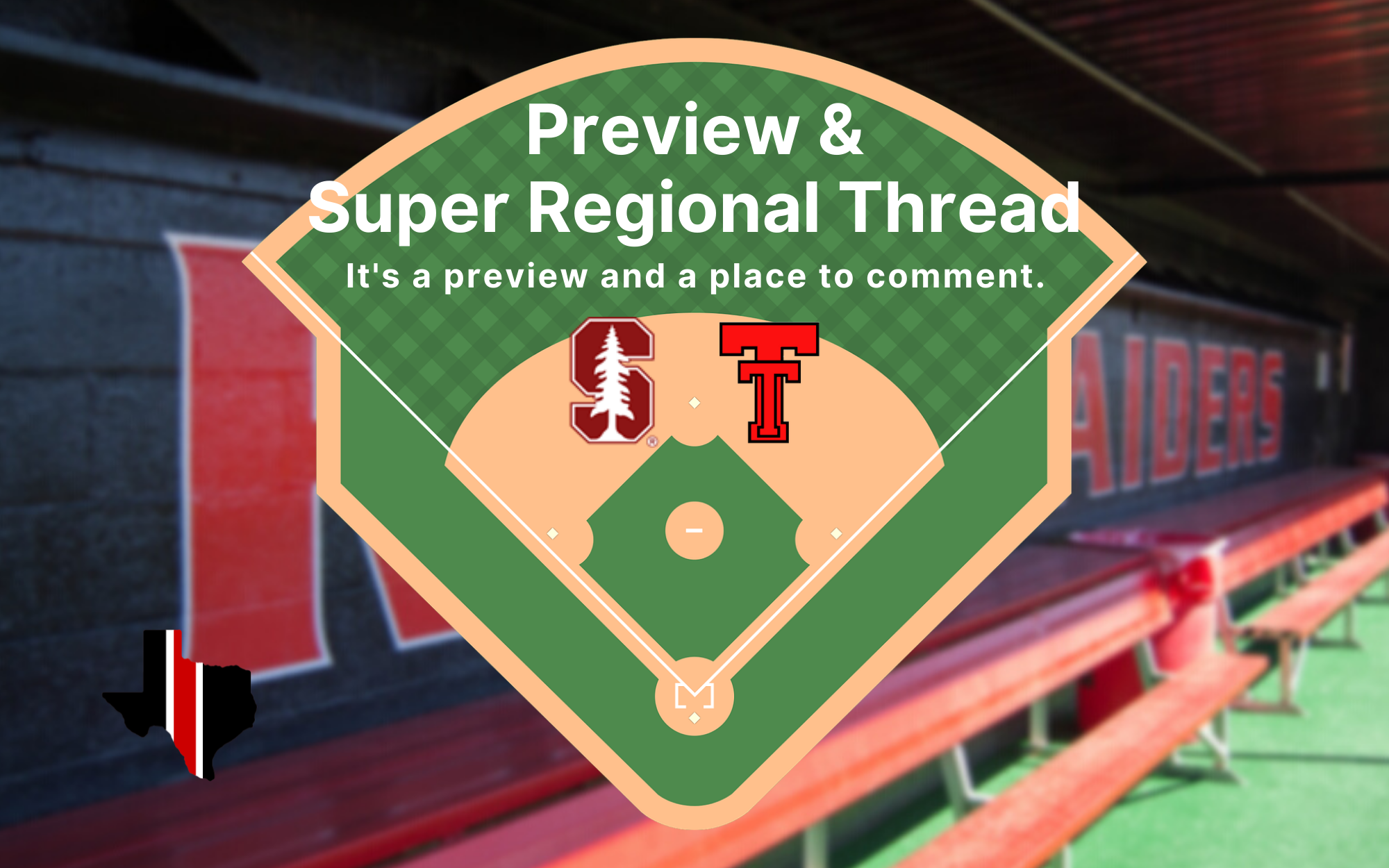 Did someone say super regionals?

For the fifth time in program history, the No. 8 Texas Tech baseball team will host the NCAA Super Regional Round as the Red Raiders play host to No. 9 Stanford at a sold out Dan Law Field at Rip Griffin Park.

The No. 8 Red Raiders (39-15) host No. 9 Stanford (36-15) for a best-of-three series beginning Friday at 2 p.m. on ESPNU. Game two is also scheduled for 2 p.m. on Saturday with ESPNU, while an ‘if necessary’ game is slated for Sunday at 2 p.m. on either ESPN2 or ESPNU. Every game will be streamed on ESPN3 and the ESPN app. Fans can listen to Red Raider games on the Texas Tech Sports Network on 97.3 FM, the 97.3 app, the TuneIn app and online at TexasTech.com.

Tickets for the Super Regional are sold out. For information on tickets, Texas Tech’s heat management plan, and other essential gameday information, visit here.

Friday’s meeting with No. 9 Stanford will be the fifth all-time between the two teams in a series that is split 2-2. This is the first time Stanford has traveled to Lubbock. The two teams first met in the 1995 NCAA Midwest I Regional in Wichita, Kansas, with the Cardinal overcoming a loss to the Red Raiders in the semifinals to top Tech twice in the regional finals for the right to move on to the College World Series. The two clubs met for the first time since 1995 last season at the Round Rock Classic with Tech posting a 7-2 win to even the all-time series.

Stanford won the Stanford Regional last weekend, topping a field that consisted of No. 17 UC Irvine, Nevada and North Dakota State. The Cardinal opened the regional with a 9-1 victory over NDSU on Friday before riding a seven-run second inning to a 12-4 victory over UC Irvine on Saturday. UC Irvine forced a winner-take-all Monday game by way of an 8-4 victory on Sunday, but the Cardinal scored seven in the first on Monday and held on to beat UCI 11-8 to advance to the Super Regionals. Stanford’s starting pitching was strong in the first two contests, as junior Alex Williams and senior Brendan Beck each tossed seven innings to pick up victories. The Cardinal used six pitchers on Sunday before piecing together the win on Monday with the use of eight different hurlers. Senior Tim Tawa, named Most Outstanding Player of the regional, finished the Championship game 3 for 5 with his 10th homer of the season, two runs scored and three RBIs. The native of West Linn, Ore. batted .526 (10 for 19) with seven runs scored, two doubles, three homers and eight RBIs over the four games from Sunken Diamond. Stanford as a team hit .310 with 36 runs scored, eight doubles, 10 homers and 35 RBIs during the regional.

Second baseman Tim Tawa will be a name you hear often on the broadcasts. He and Robinson are tied with 55 hits, he has 37 RBIs, and he and Brueser are knotted up at 10 taters. Tawa drove in Stanford’s only two runs in their last meeting with Tech with an early home run, he hit 4 of their 9 dingers in the Palo Alto Regional as well.

Beck (9-1), the Pac-12 Pitcher of the Year, limited a normally dangerous Tech lineup throughout the afternoon, giving up only a pair of runs off six hits and a career-high 13 strikeouts in 7.1 innings en route to handing the Red Raiders (39-16) their first loss this postseason.

In fact, the loss marked only the second in a Super Regional opener all-time for the Red Raiders, who previously overcame an 8-6 setback to East Carolina in 2016 to win each of the next two games for their second appearance at the College World Series. Tech is 4-0 all-time in Super Regional series after also overcoming losses over the course of a weekend set to Duke (2018) and Oklahoma State (2019).

Stanford utilized the same formula Saturday it benefited from just a day prior in the NCAA Lubbock Super Regional opener – solid starting pitching and the long ball.

The loss marked the first time the Red Raiders (39-17) had failed to advance out of a Super Regional in school history as Tech was previously 4-0 in such series, having overcome losses in three previous matchups. The College World Series berth is Stanford’s first since the 2008 season.