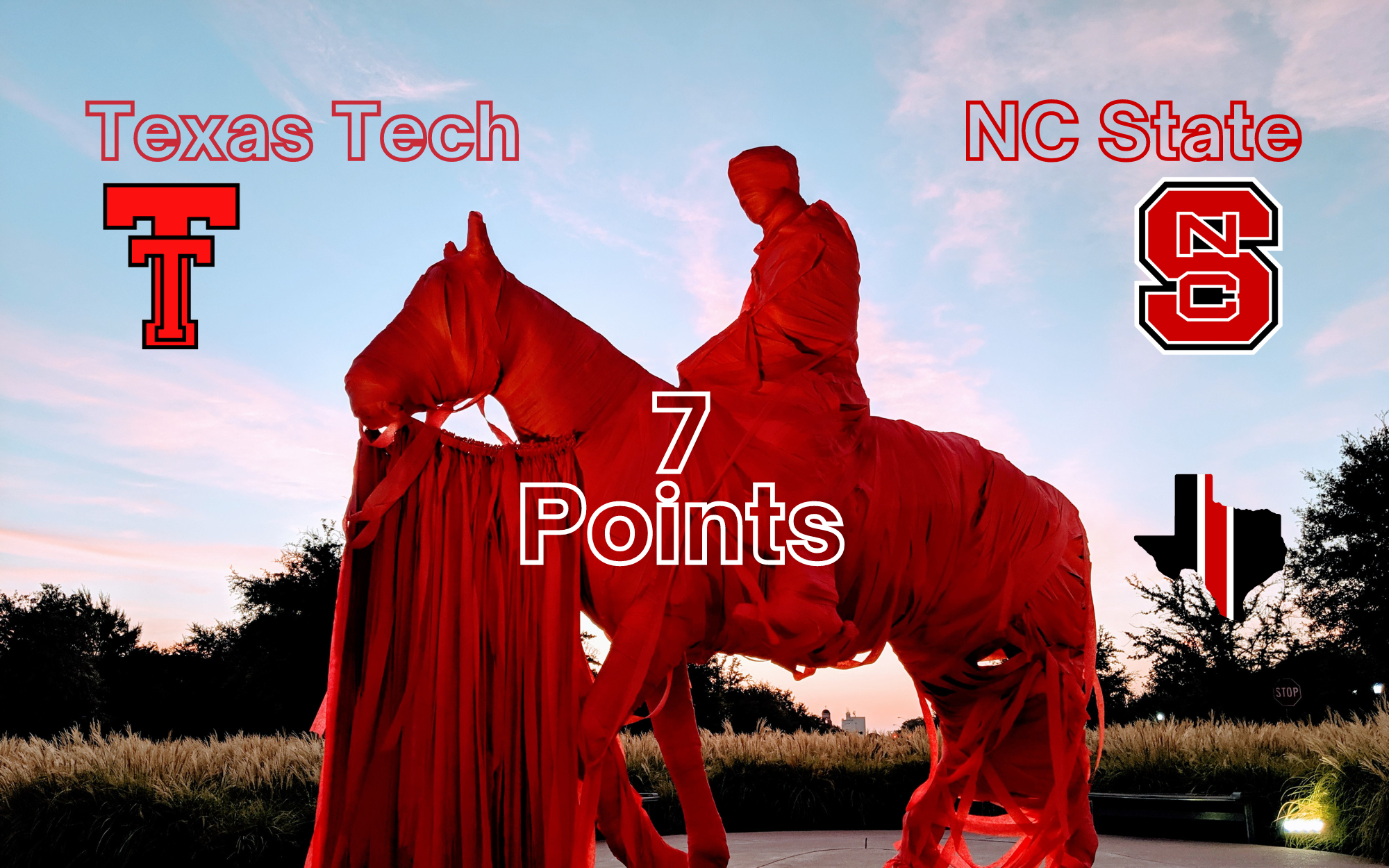 Advanced Stats: It appears that all of the major advanced stats sites have Texas Tech just slightly lower ranked than NC State. I think that’s sort of inline with what most people think, especially considering how good the defense is (more on that in a minute). 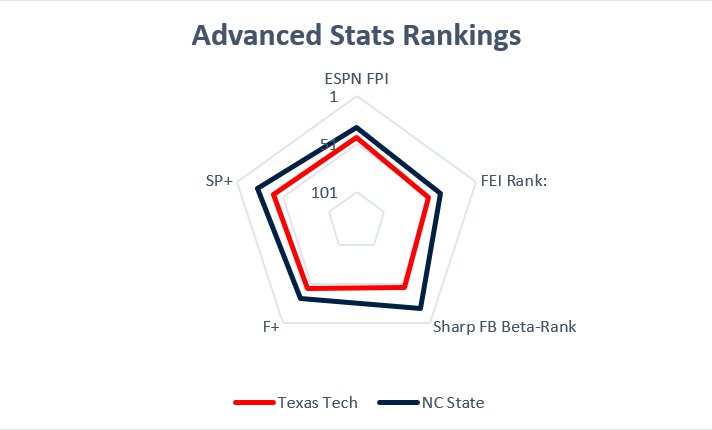 Texas Tech Offense vs. NC State Defense: It appears that NC State has the statistical advantage in pretty much every way, and what they aren’t necessarily good at, neither is Texas Tech, like explosive drives. And we should recognize that it’s early, so numbers like pass efficiency maybe aren’t as accurate as they will be at the end of the year. It also hurts that Texas Tech played a very good defense in Houston and really held down the offense. 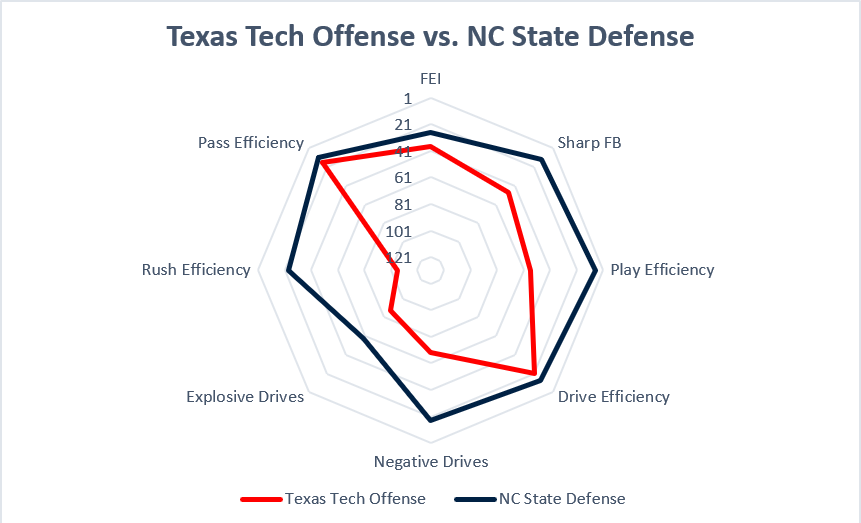 Texas Tech defense vs. NC State Offense: Those are sort of crazy plot lines and it tells me that the NC State offense is not very good thus far. Not good at all and (again, it is early) that the Texas Tech defense is really a lot better in pass and rush efficiency as well as explosive drives and drive efficiency. That’s sort of crazy to think that NC State has struggled that much, but here we are. 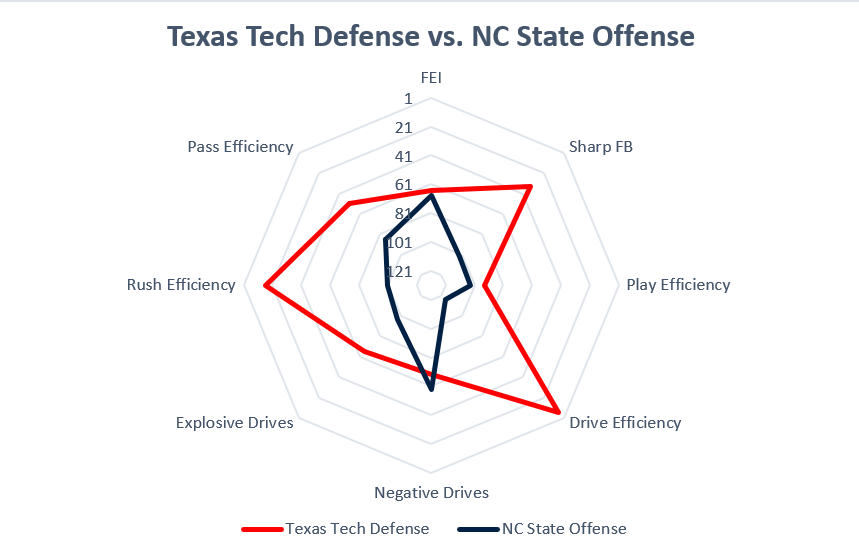 Special Teams: This isn’t so much a position battle, but special teams was a real issue last week and in addition to a blocked punt against East Carolina that was a thing of beauty, they’ve got two punt returners that are quite good, Thayer Thomas and Jasiah Provillon. Texas Tech was quite close to a blocked punt, had numerous blown coverages in the punt game, in addition to the missed field goals. After the game, or maybe during the week, McGuire said that he would be challenging his coaches and players and I absolutely expect that the special teams group to be much better and absolutely on guard to overwhelm the punt group, either blocking a punt or on a return.

Defensive Backs: The pass defense is special for NC State and I thought that last week the receivers could feast on the smaller Houston defensive backs, this week, I think the receivers will have their work cut out for them. All three cornerbacks are over 6’0″ and their backups are as well. I’ll be interested to see if guys like Nehemiah Martinez and Myles Price will have better results as inside receivers. That’s not to say that bigger receivers won’t have success, C.J. Johnson for East Carolina is 6’2″ and Isaiah Winstead is 6’4″ and they had the most success against the Wolfpack.

Key #1: A Tune Up for Devin: It’s kind of good that Texas Tech had Clayton Tune as a warm-up for Devin Leary (6-1/215), who is similar in that they are both really good athletes, both are mobile and like to run, and have really good arms and like to move the ball down the field. Leary will make bad plays, he made plenty against East Carolina. Statistically, Leary is completing 57% of his passes with 5 touchdowns and an interception with about 225 yards through the air. Leary doesn’t tuck it a tun, only 5 carries on the year and he was much more successful against Charleston Southern, I think they wanted him to run to loosen things up.

Key #2: Watch for the Screens: There were a couple of things that the Texas Tech defense didn’t do well, one of them was the bubble and tunnel screens were maybe Houston’s best plays last week. NC State has excellent running backs and I could absolutely see where the Wolfpack use the running backs in play action and the screen game. Demie Sumo-Karngbaye (6-0/210) is averaging 7.1 yards a carry and has 149 yards on the early season, while Jordan Houston (5-10/192) has 4.1 yards a carry with Houston the 2nd leading receiver with 5 catches for 72 yards, 14.4 yards a catch and a touchdown.

Key #3: Prepare for Pressure: It was absolutely clear to me that Derek Parrish was terrific last week and with the NC State 3 down linemen, the linebackers will close very quickly. The offensive line really struggled, namely Caleb Rogers struggled with Parrish; however, any other defender, Rogers handled just fine. I think that speaks to how special Parrish was and that Rogers is capable. I will say that the inside offensive line was terrific, and I’m so impressed with Dennis Wilburn at center. He does a great job of turning his body and a great job of being constantly engaged with a defender. NC State only has 1 sack on the year and it was by a defensive back, but they do have 12 pressures, linebackers Drake Thomas (6-0/230) and Devon Betty (6-1/225) each have two along with safety Tanner Ingle (5-10/186)

How much does belief help? I still can’t get over this:

You guys have been built different. I don’t know when they’re going to break, but they will break.

Prior to that quote, Head Coach Joey McGuire was passionate:

I don’t know what percent that kind of passion and that kind of emotion has on a team, but as a guy who doesn’t really get motivated by something like that, McGuire’s passion is incredible. Does that sort of belief have an effect? I very much think so.

Position ratings from the Houston game (better late than never).

Inside Pack Sports: Isaiah Moore on Texas Tech: “They’re a Big Challenge For Us”

“Being able to communicate at an elite level and doing it a little bit faster than normal. Their goal is to run as many plays as possible. Knowing that, getting them behind the sticks is going to be a big deal in order to slow their tempo down. It’s going to test our conditioning a lot. We’re going to have to rotate guys and get a lot of guys in the game, so we’re going to have them ready to play.”

“We’ve got to understand where [Donovan Smith] likes to get out and understand what moves he has, whether it’s a juke or a stiff arm. You’ve kind of got to treat him like a running back and study him that way to see what his tells are. They use him in the run game, not just in scrambling, so we’ve got to be ready for all of that.”

I’m definitely taking the points here. The line started at -8, but moved to 10.5 in some places so the betters don’t think that -8 is enough and moved it 2 more points in favor of the Wolfpack. I think that’s too much so I’m taking the Red Raiders from a betting perspective. Final score? I am surprised how poor the NC State offense is statistically, that just doesn’t make sense with all of the returning talent. I think this will be a game that’s 35-33, Texas Tech.