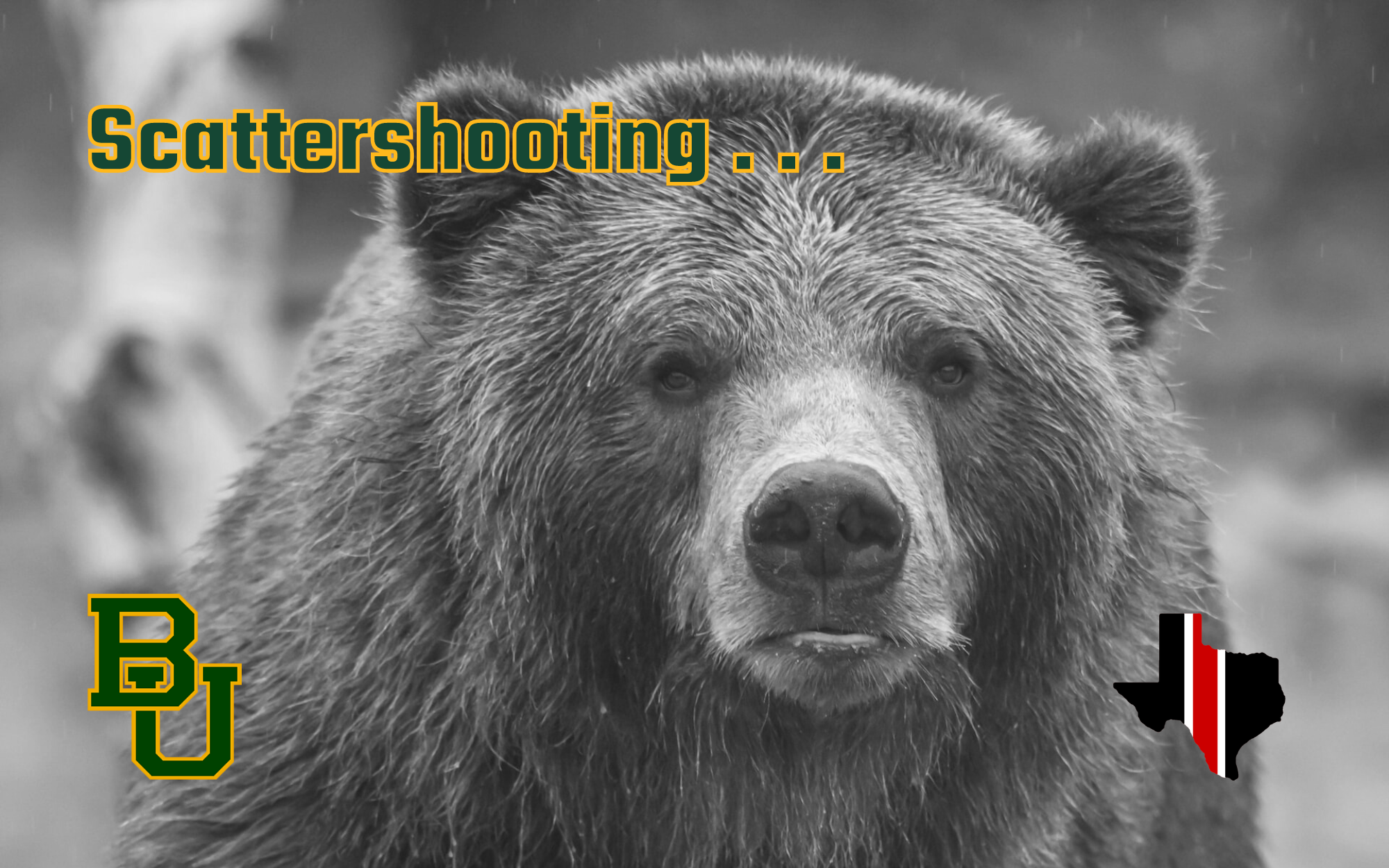 Without question, Michael Johnson was tune-in television for me personally. Especially for the 1996 Olympics and the 2000 Olympics, perhaps the most dominant runner I’ve ever seen run this side of Usain Bolt. When Johnson was running in high school he was sort of legendary, the rivalry between Roosevelt’s Roy “Robot” Martin and Johnson of Skyline were supposed to be must-attend event and Martin actually beat Johnson in high school a number of times, but then Johnson I think matured a bit physically, has 4 Olympic gold medals, 8 World Championships, and 4 Goodwill game gold medals to prove it. Johnson was also the guy that I first remember running in gold spikes.

Baylor Things. Baylor got back on track in a big way against Kansas, going up big early and really not looking back, going up 28-3 in the first half and then Kansas sort of clawed back. Blake Shapen isn’t as sharp as he was early in the year, but Baylor is running the hell out of the ball 273 yards rushing against Kansas. The Baylor defense also held Kansa to just 56 yards rushing. This is the first of a two-game road trip, Lubbock and then Oklahoma next week. I mentioned this last week, but the home/road splits are pretty stark like a lot of teams, 43 points at home and 30 points on the road. At home, the Baylor defense is allowing just 19 points, but on the road they are giving up 31. The line opened up with Texas Tech favored by 1.5 and that line may be down to Texas Tech by 1.0 . . . Oh, and the game will be broadcast on ESPN2 at kickoff is at 6:30 p.m. which means that Texas Tech wears all black . . .

Up & Down in the Big 12. The big game was between Kansas State at TCU and the Horned Frogs came away with a 10 point win, 38-28. Kansas State didn’t score in the second half and they also lost every quarterback (an exaggeration, but they lost Martinez early and then lost their 2nd string guy for a bit). TCU continues to just roll.

Texas lost, on the road to Oklahoma State and there are lots of Longhorn fans questioning Sark. I’ll say that Oklahoma State is good, maybe the 2nd best team in the Big 12 and losing to them by 7 on the road isn’t some sort huge failure, but maybe a real underestimation of how good OSU has become. My wife likes to often remind me that it’s not always about me, and for Longhorn fans, I think for them to consider that this loss may not be completely about them, but about a really good OSU team. Quinn Ewers threw 3 picks and that’s been the main talking point, but OSU is good.

We TCU heading to West Virginia and how fitting would it be if TCU lost to WVU in Morgantown? The game’s at 11:00 a.m. so I don’t know if that’s enough time for everyone to get going. The Horned Frogs are favored by 7 . . . Oklahoma travels to Iowa State who is coming off of a bye, the Cyclones are winless in the Big 12 and OU is 1-3. The Sooners are favored by 1.5 . . . Oklahoma State hits the road for what may not be as tough of a game as they face Kansas State with a not fully healthy quarterback room. No line as of yet . . .

Internet Things. I mean, have you ever really looked at a platypus? They’re part duck and part otter and part beaver (this is me making stuff up and just looking at the thing), but born in an egg. They have venom in spurs on their feet. VENOM. They are carnivores. They have electroreception which is the ability to locate prey with electric fields. Nature never disappoints.

Other Observations. Youssouf broke his toe on his birthday, which was Saturday, the day I was running my race in Oklahoma. First of all he never wears shoes, doesn’t wear shoes from March until December each year (he wears them to school, but not when he plays outside), he was running in the neighborhood and zigged when he should have zagged, his toe got stuck on something and he was apparently in a lot of pain. Of course I was in Oklahoma, but my wife took him to the emergency room on Sunday morning, confirmed that it was a break. We took him to the specialist and he just has to sit out for 4 weeks and he should be back to his normal self. The specialist also said, completely unprompted, that he is going to be huge and she feels sorry for our grocery bills in the future. I have no idea how big he’ll be, but that’s the 2nd doctor who has told us this . . . Because we don’t have practices or games all of he time, this has allowed my wife and I to have a date-night, which we had one last night. I don’t know the last time we had one, so it’s been a while . . .