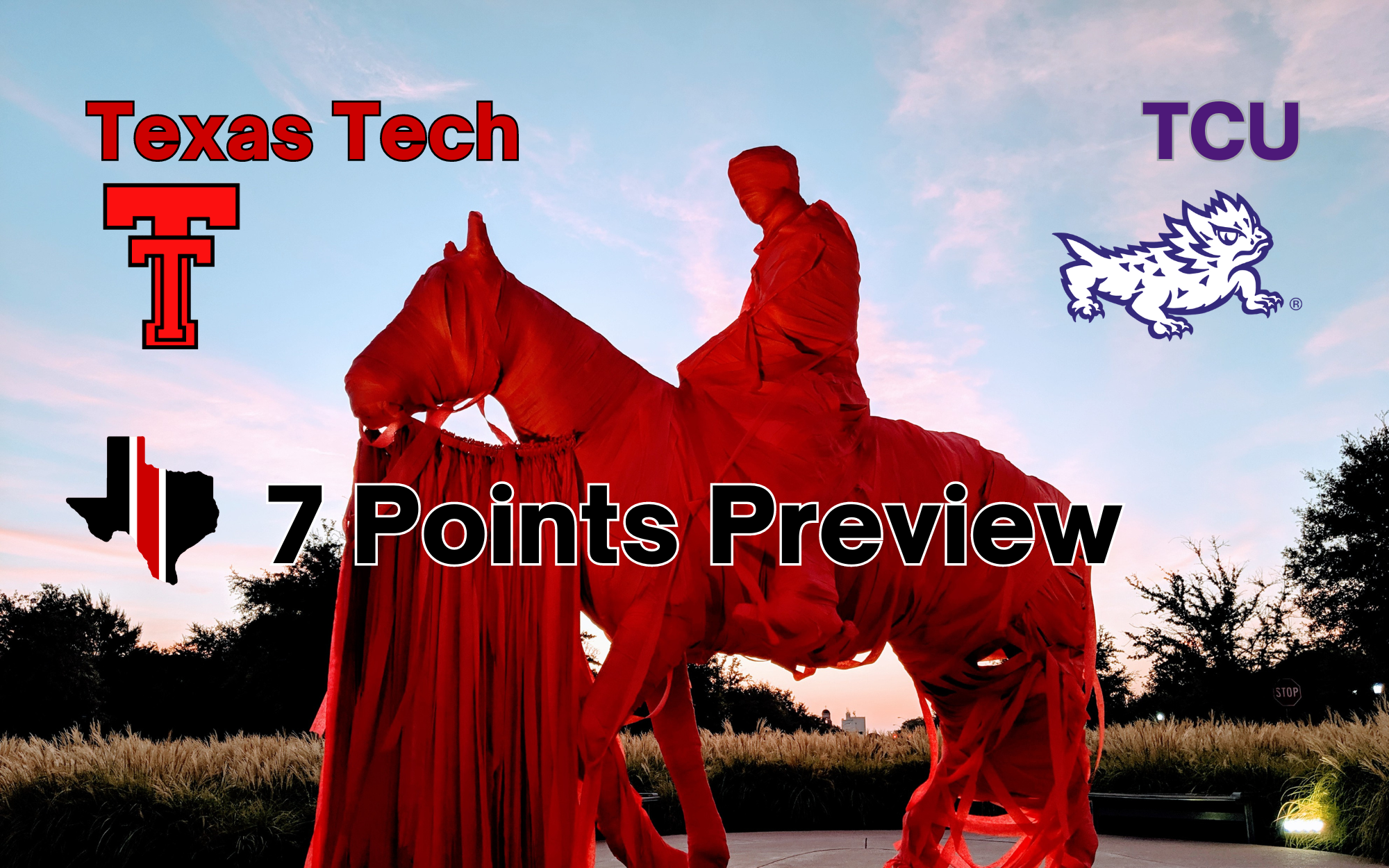 Advanced Stats: Against West Virginia and Baylor, at least Sharp had Texas Tech ahead, and although it is close, it is not quite there and most metrics have TCU 20-spots better. 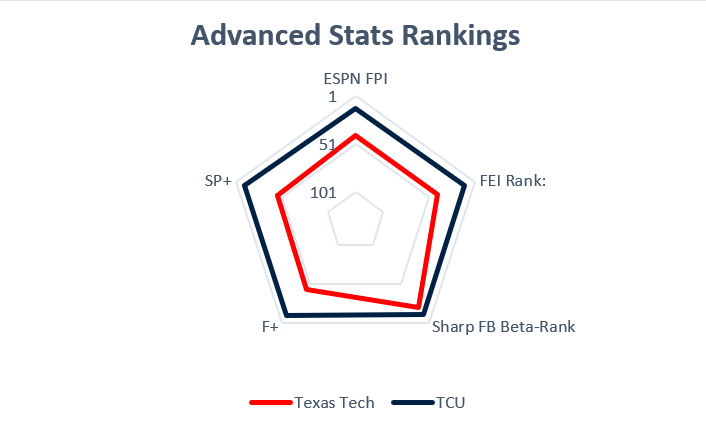 Texas Tech Offense vs. TCU Defense: The Texas Tech offense definitely has its strengths, but the TCU has theirs and maybe more strengths statistically. This appears to be an uphill battle. 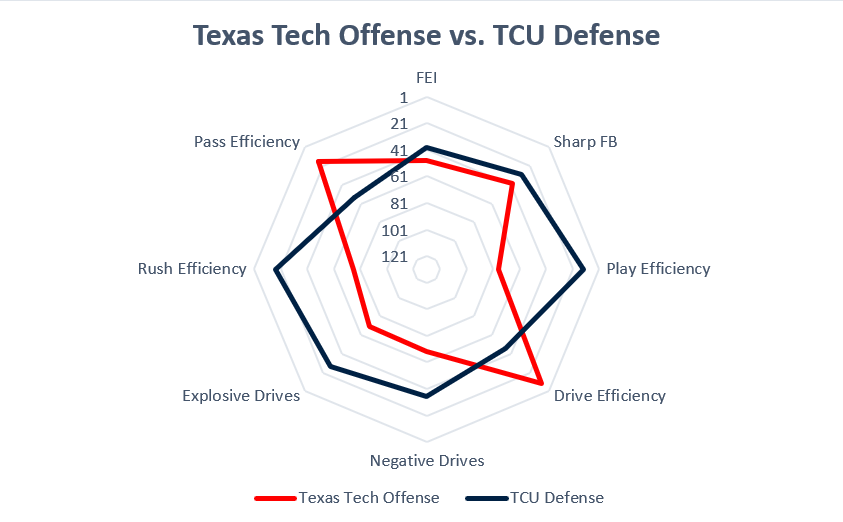 Texas Tech Defense vs. TCU Offense: I think the TCU offense is just betterin just about every way. Even if it is ever-so-sligtly in a few areas. TCU is good at sustaining drives, but on a play-basis, TCU is much better. 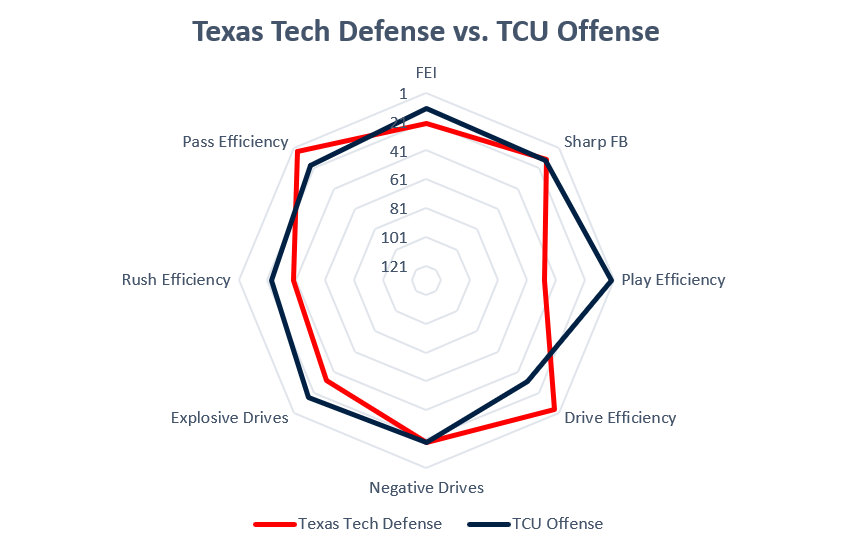 Upper Class Offensive Line: All of the starters are juniors or older, thus, when Joey McGuire talks about how TCU is older, it does start there I think, with an upperclassmen laden offensive line. The Horned Frogs are 15th in rushing offense, have allowed just 13 sacks all year good for 40th in the nation.

Key #1: Stopping the Triumvirate: Having receiver Quentin Johnston (6-4/215), quarterback Max Duggan (6-2/210), and running back Kendre Miller (6-0/220) is a tough trio to beat. Miller is averaging 106 yards a game and 6.45 yards per carry with 11 touchdowns. Duggan has run for 276 yards (which probably isn’t adjusted for stats) and has 4 touchdowns, which is great because my guess it’s a lot more than that, while he’s passing for 276 yards, completing 67% of his passes with 22 touchdowns and 2 interceptions. Yeah, 2 picks all year long. Johnston is being discussed as a potential 1st rounder and he’s averaging 81 yards receiving a game, 15.48 yards a catch with 4 touchdowns. Those three 2ill absolutely a focus for the defense. Stopping them? It hasn’t happened al year.

Key #2: Slow the Passing Game: The passing game has not only been outstanding all year, they are 3rd in the nation in passing efficiency and the lowest passer rating they’ve had all year was to open the season against Colorado a rating of 115.62 and one other not-great performance against Oklahoma State at 134.06. Other than that, TCU doesn’t have a passer rating below 172. For comparison purposes, Texas Tech’s high was Murray State of 234.57, but has not had a quarterback rating above 146, which was against West Virginia.

Key #3: Take Advantage of 3rd Downs: The TCU defense is good, but not great. There are a couple of areas that TCU doesn’t do great at and because the offense has been so efficient, TCU has allowed 40.5% of third downs, this is good for 82nd in the nation and they can be exploited in the air, 104th in the nation in passing yards allowed. I really do belive that for the offense to reach its full potential, the wide receivers have to get open and make a difference.

Can they do it on the road? This is a problem that has to be solved but has not as of yet. There’s a pretty big disparity in home vs. away stats. From a scoring perspective, Texas Tech scores only 24 on the road and 40 at home. The defense allows 26 at home and 35 on the road. Those figures alone point to the idea that Texas Tech would lose 24-35 and with the line being 10, it wouldn’t make a ton of sense to take those points and still bet Texas Tech. Against the spread, Texas Tech is 1-2 on the road and 0-3 overall. The question is when this will end? I don’ tknow that there’s a magic formula (other than not throwing interceptions, dear lord, no more interceptions).

I don’t think I can pick Texas Tech given the history of how Texas Tech has played on the road this year. And this isn’t about the Baylor loss, but it it is about playing well on the road. I sort of need to see it before I change my thought process with teams that are significantly better and don’t turn the ball over. TCU to win and don’t think that Texas Tech can cover that spread, even at 8.5.