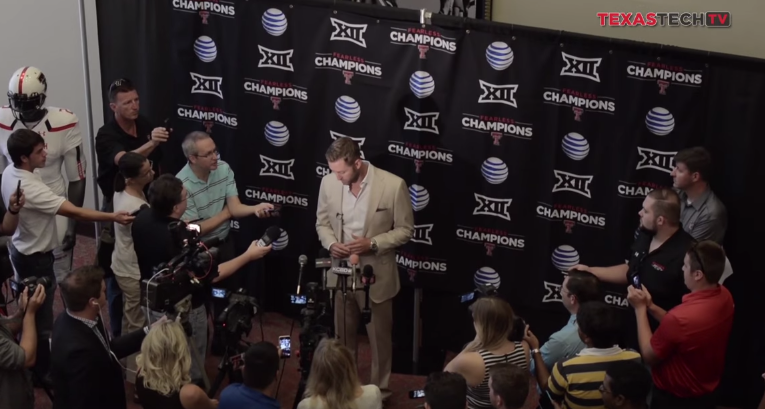 Dressed in an ever-fitted suit and purposely coiffed hair, Kingsbury began fielding questions from the gathered media. He could’ve chosen to focus on the stellar play of his sophomore quarterback, Patrick Mahomes. He could’ve highlighted the team’s dramatic turnaround in discipline and ball control after committing only a handful of penalties and putting the game away late with uncharacteristic ball control and a grinding of the clock in a hostile environment.

Later, Kingsbury explained why Bielema’s comments bothered him. “I’m the son of a Texas high school football coach,” Kingsbury said. “And 90% of teams in Texas run a spread.”

“It rubbed me the wrong way,” he said.

Fair warning, college football. Fair warning. Kingsbury rarely ventures outside well scripted coach speak, so when he says something so out of character, it’s huge. On Saturday night the college football world learned that there might be something to the young coach beyond good looks and sunglasses. And Bret Bielema learned that maybe it’s not a good idea to rub Kingsbury the wrong way.