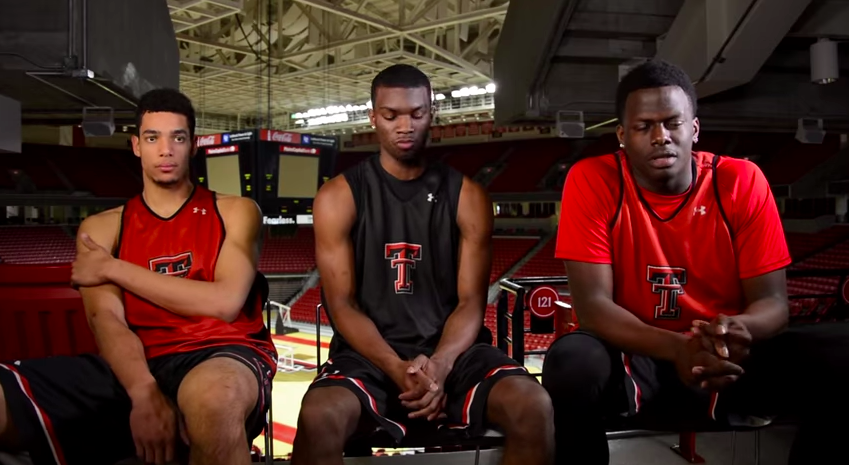 Let’s take a look at the potential starters for Tech hoops this upcoming season.

Last season Tubby Smith had to change up the starting lineup for our Red Raiders multiple times for a number of different reasons. Whether it was injuries, or shifting players from the bench to the court it seems that was his way of playing with the recipe to find the right results. Last season didn’t fare too well, but it did end with the starters for the last couple of games being Robert Turner, Devaugntah Williams, Toddrick Gotcher, Zach Smith, and Norense Odiase.

It seems that Tubby Smith might still be comfortable with that lineup minus Turner. After Turner had exhausted his NCAA eligibility we have Keenan Evans being slotted for the starting PG spot. Looking back through the Canadian tour in August, Tubby Smith had the starters in all four games set exactly the same. Evans, Williams, Gotcher, Smith, and Odiase.

If I had to bet on the starting lineup for the upcoming season, I would put my money that the guys that started in Canada are going to be the starters until our coach feels the lineup needs an adjustment. Let’s take a look at the individual abilities in this 2 senior, 3 sophomore, 3-guard set…

Evans steps into the starting point guard role left open by the departing Robert Turner. He did get a nice chunk of minutes off the bench as a frosh averaging over 18 mpg. He had a rough time adjusting to the college level, but showed flashes of talent that are hoped to have been developed in the off-season. He was an inconsistent shooter that hopefully worked on his mid-range and 3-point game. Evans was sloppy with the ball at times and made typical freshman mistakes. It will be interesting to watch his jump from freshman backup PG to starting sophomore PG, he does possess skills to be a playmaker and slasher. He is pesky on the defensive end, but not as quick with his feet as Turner was against opposing backcourt players.

Williams is the returning leading scorer for this squad. With this being his senior season he has to pick up the slack and will be our only true 3-point threat in the starting lineup. He is streaky with his shooting, and can make a load of buckets when he has the right touch on his shots. More of a true shooting guard he looks for the open shot or to drive the ball when he touches it. He can get to the paint and get the ball into the hoop when needed. Sometimes he would rush the set and make a bad decision to lose the ball. He needs to cut down on the turnovers and shoot lights-out this season. On defense he can hold his own and does okay against opposing backcourt players.

The heart of the team and senior leader of the squad is Gotcher. His experience in the Big 12 is by far the deepest on the roster, and he has stuck it out as a Red Raider the whole time from his redshirt freshman year in 2011-12 with Billy Gillispie at Texas Tech. He is a workhorse on the offensive and defensive end of the court. One heck of a tough player. He is trying to develop into a better 3-point shooter, but with being hot and cold from beyond the arc has never been considered a threat from the outside. His stats aren’t incredible, but it is more what he does without the ball in his hands to help the team out that has him in the starting lineup.

Smith shined in his debut freshman season with the Red Raiders. Last season Tubby Smith gave him more minutes on the floor than any other player with almost 28 mpg. He was fairly consistent in putting the ball in the hoop around the rim. The note to make for our offense would be to have him get more involved, and see if he has worked on getting a nice quick mid-range shot in his skill set. If Smith could turn it up a notch on offense he will be great. On defense he is a blocking machine. He ranked #4 in the Big 12 with about 1.5 bpg, and broke the single-season blocking record for a freshman. He is also a decent rebounder (led the team), and has a knack for coming off the boards with the ball. With some development and experience he will be an excellent all-around player.

The big fella had his ups and downs over the last season. Odiase started out with a bang and was a monster on the offensive side of things. As conference play approached he slowed down his production, only to start to turn it back up as the backside stretch of games came in February and March. His freshman year hopefully gained him the frontcourt experience in the Big 12 to become even more dangerous this season. He is a big body that can crash the boards with any other player, and he can get points when he gets the ball in the blocks or near the paint. He needs keep up his aggressive nature and be our bulldog under the rim.