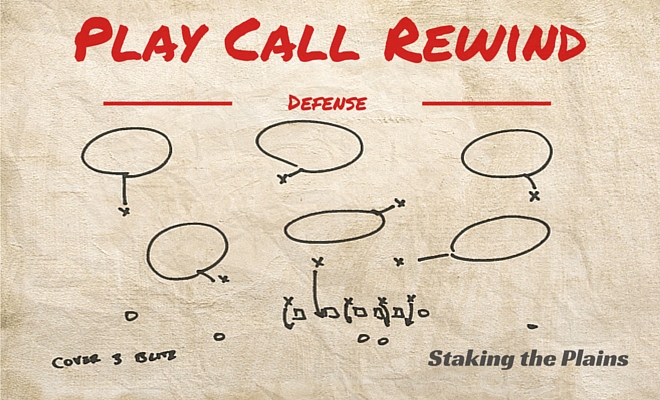 This week, we take a look at an interception by Justis Nelson and how he got into position to make the play.

Fair warning, we’re going to talk a little about Baker Mayfield this week. It would be a little difficult to look at a standout defensive play without looking at the opposing QB. But maybe this will be a little therapeutic as we’re going to look at one of his well-defined and well-known faults as a passer, one that was identified early as he was a freshman at Texas Tech – his tendency to lock onto his primary receiver.

We all should remember the interception Mayfield threw to Justis Nelson midway through the second quarter. Tech was down 21-10 but had forced a fumble on the previous drive and scored a touchdown. It seemed these back-to-back turnovers were turning the momentum back in Tech’s favor, helping them fight back into the game. 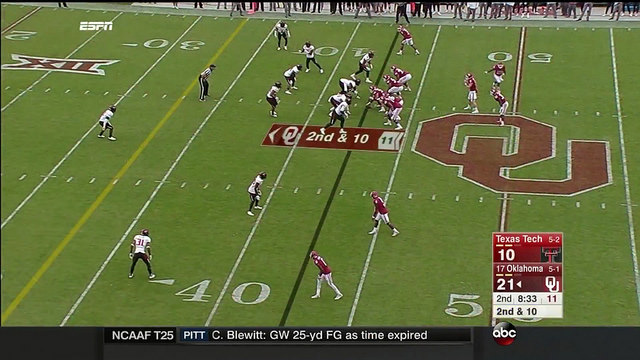 The Sooners are lined in 20 (2 running backs, 0 tight ends) personnel, with two receivers to the field side, one in the boundary. Pre-snap motion should help Mayfield identify man vs zone coverage for the defense as Mixon goes in motion to the wide side of the field. Also, Lincoln Riley had called a swing pass very similar to this earlier and was probably hoping to catch the Tech defenders biting too hard on the motion and free up one of the receivers deep.

The corners and their alignment should tell you they’re in zone coverage. Their hips are turned in and they’re looking at the quarterback and not their receiver. 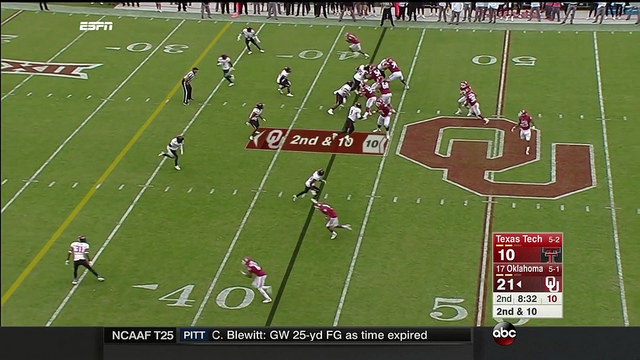 The defenders actually rotate over to cover Mixon as you see the nickel back, Tevin Madison, actually let the receiver in front of him go past him as he gets upfield for the possible pass to Mixon. Mayfield is riding the play fake to Perine, but only one defender really bit on that and it wasn’t that much (the backside linebacker). Jah’Shawn Johnson is rolling over to cover the slot receiver as Madison was covering Mixon, and the backside safety, JJ Gaines (initially covering Mixon) drops deep to fill where Johnson was. The corners still have their hips turned in and are dropping back nicely with the receivers.

At this point, you can see that Mayfield has completed the play fake and has his eyes up to read the defense as the receivers are out in the pattern. Defensive line hasn’t forced him into anything and nobody is truly open at this point, except for maybe the outside receivers if he threw the ball exactly at this point. Dede Westbrook is open by design of the play as he is running a short curl while the corner drops deep and Shepherd is open because Bethel is still reading the QB’s eyes and hasn’t reacted to Shepherd’s route yet. 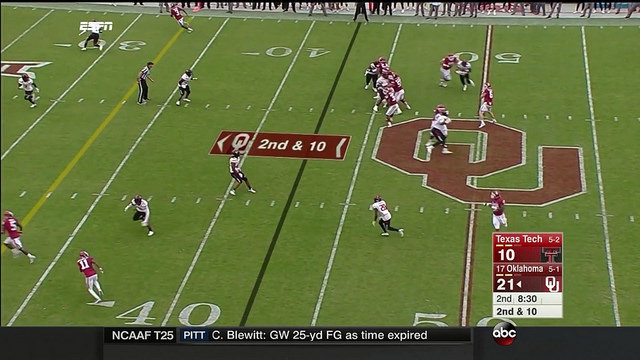 Look at Mayfield. He hasn’t looked away from Durron Neal, #5, the entire time he’s had his head up and you can see the defense is seeing the same thing. Look at Madison. He’s bailing on Mixon because he’s reading Mayfield. Look at Gaines at the top left of the screen shot. He’s flying across the field with his eyes locked on Mayfield’s. The playside linebacker is dropping further because he’s seeing what everyone else is seeing. You can’t see him in the frame, but Justis Nelson is doing the same thing. 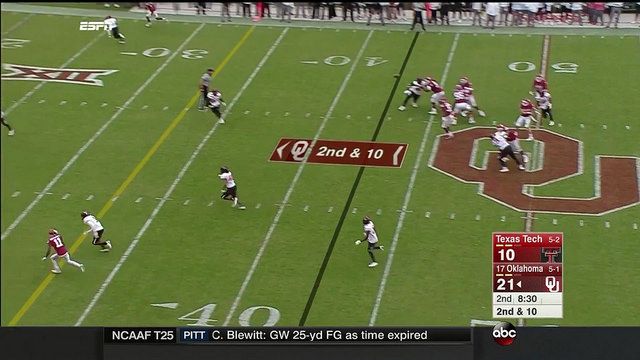 At this point, Mayfield was committed and released the ball (it’s hovering above the line of scrimmage marker). The only defender who doesn’t know where the ball is going is Bethel because Shepherd (and Westbrook) ran double move routes and he was locked in man to man coverage on his side of the field because there wasn’t a safety to his side of the field and his receiver was going deep. 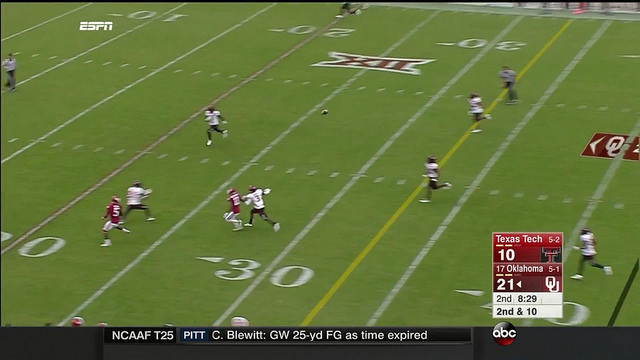 Remember when I said that Justis Nelson was reading the QB’s eyes but he wasn’t in the frame? This is my evidence to that. He’s positioned himself to catch the ball instead of picking up the receiver as he was running deep. And this isn’t an adjustment to the ball in the air, either. Nelson is standing straight up, even leaning back towards the line of scrimmage. He’s waiting on the ball to get to him. 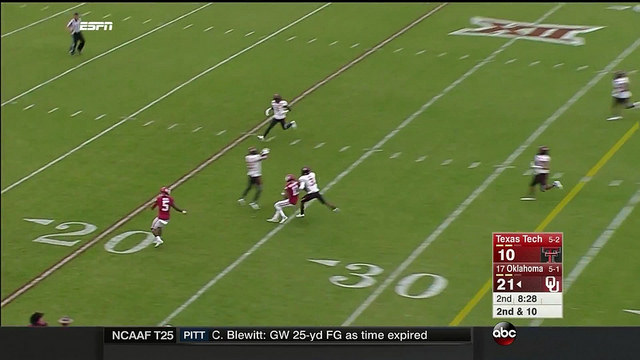 At this point, the only person that possibly could have prevented this interception was Westbrook, but probably would have been called for pass interference (of course I don’t know that with the officials we had). 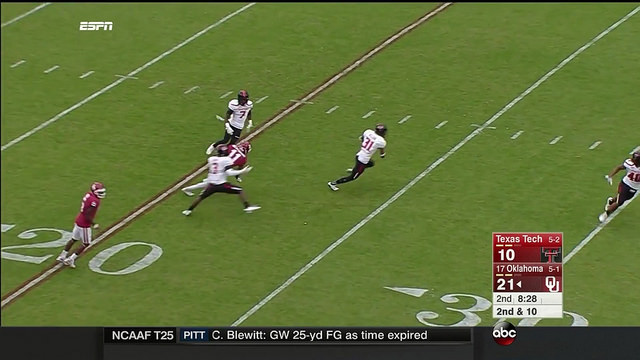 This is a prime example of a defense knowing and preparing for the tendencies of their opponent. It certainly helped that the coaching staff had plenty of experience with Mayfield doing this exact thing while at Tech. The coaches knew he was prone to this, the defenders knew he was prone to this, even the broadcast crew knew it. It doesn’t look like Mayfield knew it, though.