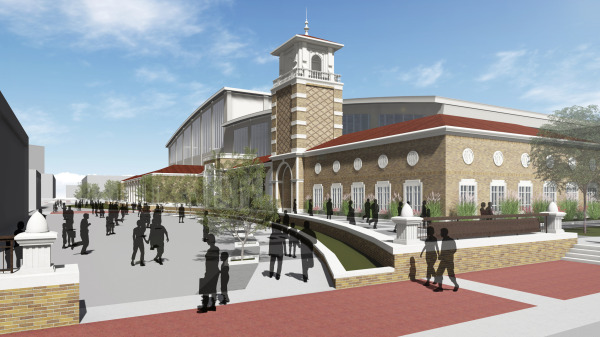 Texas Tech is just under $4 million from beginning construction on the new Whitacre Athletic Complex.

Yesterday, Texas Tech announced that they were within $4 million of it’s fundraising goal of $48 million need to raise an additional $3.8 millin in order to meet Texas Tech athletic director Kirby Hocutt’s goal of funding the entire amount by March 1, 2016. Hocutt said that he is confident that Texas Tech will begin construction in the spring of 2016.

“First-class facilities like the new Sports Performance Center give our fans unforgettable game day experiences, help recruit top student-athletes and ensure that our fearless champions remain competitive,” Hocutt said. “The Sports Performance Center is our No. 1 priority in The Campaign for Fearless Champions and I’m asking the entire Red Raider nation for their support. Every gift, regardless of size, brings us closer to the day that we can welcome our student-athletes and fans into this incredible facility.”

Hocutt mentioned that a handful of donations have happened recently to make this happen and as LAJ’s Don Williams reports, look no further than Ed Whitacre, Jr. the former Chairman of the Texas Tech Board of Regents, CEO of General Motors and Chairman Emeritus of AT&T as the new sports facility will be named the Whitacre Athletic Complex:

“Imagine just drawing a big square around all the athletic facilities south of the stadium and that main corridor, that will be the Whitacre Athletic Complex,” Hocutt said. “And we’ll have nice entryway points into that colonnade walkway. We’ll have nice wrought-iron fencing around the entire Whitacre Complex, but there’ll still be a daily passageway for students, the community and our student-athletes.”

In addition to the Whitacre Athletic Complex, Hocutt announced some additional upgrades as well, including renovations to the north endzone, which will not just be club seating, but 45 outdoor suites. If anyone wants to invite me to one of those, I’m game. Hocutt also announced that Dan Law Field and the field at Jones AT&T Stadium will receive new turf and Dan Law Field will utilize the old scoreboard that was at Jones AT&T Stadium.

The track aspect of the Whitacre Athletic Complex will seat approximately 800 spectators with the ability to seat an additional 1,200 more as the wall between the football portion and the track portion will be able to utilize temporary stadium seating.

The new weight room will not be used for football, but for all sports other than football.