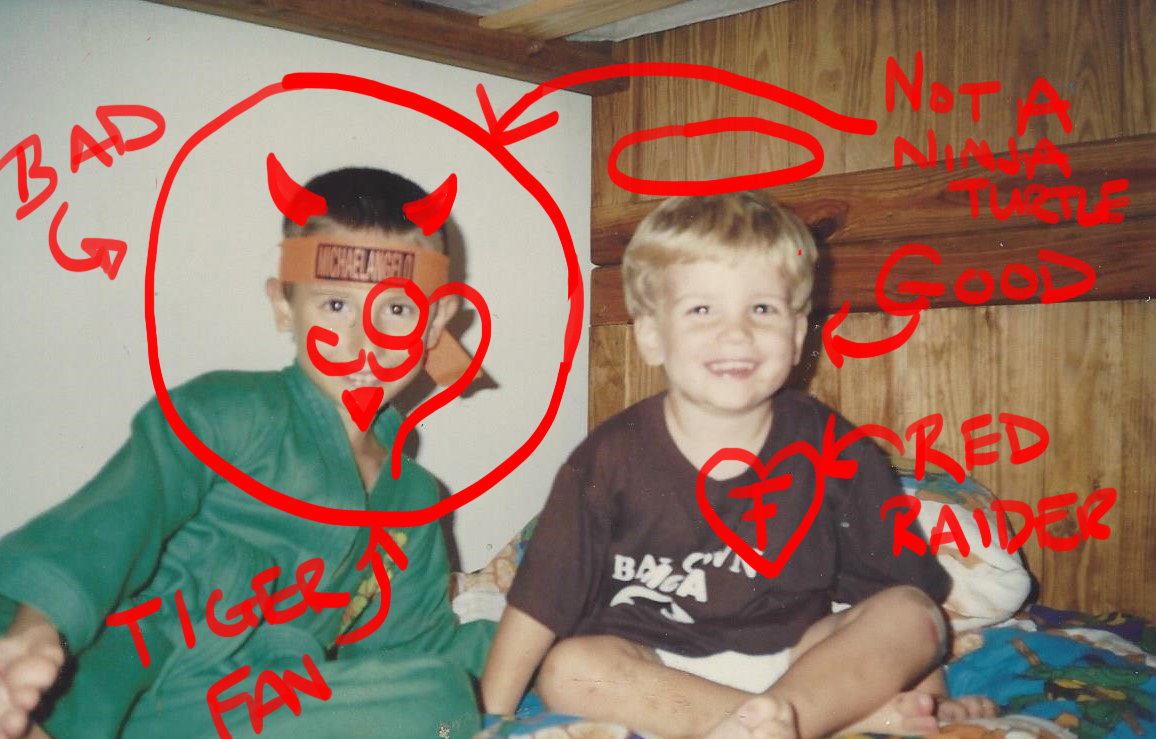 I had questions. My brother, an LSU Tiger, had answers

Ah yes, it’s that time of year where families gather ’round the fireplace, unwinding from the post-yuletide furor, to take in a series of college exhibition games with exotic match-ups, sponsors you’ve never heard of, and questionable revenue streams. A majority of the times the chosen opponent is innocuous, with little history on the field between the teams. But sometimes, that opponent ends up being one of the closest people to you. Your flesh & blood, your best friend. Your brother. This is the stuff that Ken Burns documentaries are made of. With lines drawn through December 29, I decided to ask GDC, one of the most knowledgable people I know about LSU & college football in general, a few questions about the upcoming Texas Bowl

GDC: Yeah, the three course meal was nice, but I hope NRG stocks more bourbon than Jerry World did that day.  If I remember correctly, you hit the cookie table pretty hard after the Honey Badger scoop n’ score.  Not sure who is going to need the cookies this time around, but I’ll be smuggling in a bag of Chewy Chips Ahoy just in case.

BDC: I’ll never forget my 3rd quarter Saddest Hot Dog in the World™.  So, we’ll go ahead and get the incredibly large, mean, elephant out of the room: Leonard Fournette. You were at LSU during Saban’s tenure, have seen national championships, and more draft picks than I could ever recount. It seems like LSU always has a stable of running backs that could start anywhere in the nation. How does Fournette compare to the Dom Davis’, Joseph Addai’s, and Jeremy Hill’s of the past? What sets him apart?

GDC: You are right, LSU has always had really good backs, but Leonard is in a class all his own.  He is a big, strong, punishing runner that loves contact.  If you can’t get to him in the backfield, he’ll get you for 4-5 yards every time.  Oh, and did I mention, at 230 lbs, he might be the fastest player on our team?  I’m not saying he would beat Jakeem Grant in a foot race, but I would for sure fork up whatever pay-per-view asks for that show.  He’s a special player, and I’ll bet finishing only 6th in the Heisman voting will give him a little extra fuel for the bowl game.

BDC: Oh wonderful, an angry Leonard Fournette should be fun. Given Fournette’s dominance, how does that play into a Cam Cameron offense? If I’m not mistaken, Cameron is associated with quarterback-focused offenses with a robust passing playbook. Does the presence of Fournette shift Cameron away from what you think he wants to do with his offense, or does it work in tandem with what Brandon Harris brings as a quarterback? I know Les came out and said this week that he wants a focus on the passing game in bowl practice.

GDC: I’m not sure it is so much the influence of Fournette as it is the influence of Les Miles.  Every offensive coordinator under Les since Jimbo Fisher left has come in highly touted with a good track record of scoring points.  And every time they morph into a run first, control the ball at all costs type of play caller.  We definitely have the playmakers outside with Dupree, Dural, and Tyron Johnson, and Harris has shown potential at times, but going away from Fournette in this setting would be almost unthinkable.  Les is always talking up the passing game in interviews.  We know spring practice has started when the first quotes come out about how much better our passing game is this year.  Look for a large dose of Fournette, with the passing game coming from play action deep balls.  I’ll leave you with Les’ quote about Harris. “His personal necessity to throw better and be more accurate is what he’s working on. It looks pretty good from here.” Good ol’ Les.

BDC: The sound you just heard was the twitch of a thousand eyelids at your mention of Tyron Johnson. Alright, now that we’ve gotten the obligatory Fournette vs. Awful Tech Run D out of the way, let’s talk about what could really decide the game: Tech’s offense vs. the LSU defense. What are your thoughts on Kevin Steele’s first season? I know he runs a version of the 4-3, which is what former DC John Chavis used. Do you feel things have transitioned smoothly, or do you notice a difference? If there’s a difference, is it from scheme or personnel?

GDC: Smooth would not be an adjective I would use to describe Steele’s inaugural season.  Our defense has tons of talent on all levels, but have been plagued by mistakes and busted coverages.  The d-line has been good, not great.  If you can block Lewis Neal and Arden Key, you probably won’t hear much from the rest of the group.  Our linebacking corps is our thinnest position group, and although we have two pretty good backers in Deion Jones and Kendell Beckwith, when they check out large holes seem to form in the middle of the field.  The secondary group is what worries me the most about the game.  They have routinely given up big plays this year, and with the number of times Tech will test them, they are bound to let a few more big plays slip through.  Jamal Adams is a bad man, don’t mess with him, but the rest of the group are vulnerable and need to play their best game of the year to stop Kliff and his boys.  Steele’s new defense was good this year when they were communicating well and not giving up long touchdowns, but nothing that I have seen so far tells me they’ll be successful against this Tech offense.

BDC: I know you’ve watched a lot of Tech football this season. Building off of your previous answer, what does Tech do on offense to keep LSU on their toes? Will DeAndre Washington continue to be a key factor, or should the pass be the focus against the LSU linebackers & secondary?

GDC: I think DeAndre will definitely be a factor.  Kliff has done a great job passing to set up the run, and there is no reason to stray from that now.  Washington should be able to find some running room if the passing game is keeping extra defenders out of the box.  We have also struggled with quarterbacks who can get outside the pocket and still complete passes, so Mahomes legs could prove big.  With our penchant for blown coverages and Mahomes’ ability to keep his eyes up while running, there is big play possibility there.

BDC: I always love hearing your LSU stories, and I can’t wait to go to another game in Baton Rouge with you. What’s your favorite LSU football tradition? Four Corners salute? Mike the Tiger roaring in front of the visitor’s section? Callin’ Baton Rouge?

GDC: I hate to pick the low hanging fruit here, but there really is nothing like tailgating at LSU.  Before I went to school there, I had never attended a game, but I will never forget my first football Saturday on campus.  I was woken by the Tiger Band playing the 4 Corners Salute at 7:30 AM on the band practice field behind the dorms.  When I looked out the window, the courtyard was filled with people, smoke coming from grills and cold drinks in hand.  I decided to walk across campus for breakfast, and couldn’t believe the number of people already out. For a game that kicked off in 12 hours. Against a FCS school I had to google.  Every square inch of campus was packed, and I knew then that I had made the right choice.  The Tiger faithful will be out in full force at NRG, and I would definitely encourage the Tech fans to wander through the parking lots and make some friends with your enemy for the day.  There might be some spirited debates, you will get “Tiger Baited”, but you will also leave the tent with a beer and a bowl of something that came out of a large pot (sometimes it’s better not to ask). (Edit – I’ve heard stories about one of the newer SEC schools taking things a bit too seriously from the Tigers and getting their feelings hurt. Don’t be like that new SEC school, it’s all friendly banter so have fun with it and enjoy the delicious food.)

BDC: What’s your favorite LSU game that you’ve ever attended?

GDC: My favorite game has got to be Florida in 2007.  Georgia 2003 and Auburn 2007 are close, but I can never remember being so exhausted after a football game as I was that night.  #1 vs. #9, College Gameday, night game at Tiger Stadium.  Tim Tebow torched us, just like he did every year, but Les decided to go for it on 4th down 5 times, twice on the game winning drive when we were down by a field goal late in the 4th.  We were all yelling for the game tying field goal, but he went for it, and got it, and we won just how Les drew it up.  I remember walking away from the stadium that night, and a 50ish year old Florida fan wearing a Tebow jersey was standing there by himself.  He looked defeated, so I reached out to shake his hand and complement him on his squad.  He took my hand, pulled me in for a hug, and told me that was the best game he had ever seen.  It was weird, but i guess it was appropriate for the setting.

BDC: Alright, last question. Your lovely fiancee is a fiercely proud Red Raider. On a scale of 1-10, how icy are things right now in the household?

GDC: Iciness really depends on the day.  We were pretty much broken up when the bowl pairings came out, but we’ve worked through some things and have repaired the relationship.  We are really so pre-occupied with the last minute wedding details and the holidays, we don’t talk about it all that much.  She left a Tech pullover on my recliner so I threw it at her head, and she has since sworn off all things purple, but I think that’s just normal relationship stuff.  I’ll leave you with this: I was flipping through Twitter the other day, and someone posted a picture of Les and Kliff at their press conference shaking hands.  I showed it to my fiancee, and she stopped, smiled, and said, “What a perfect metaphor for our marriage.”

Well, there you have it. When LSU played Oregon in 2011, the sniping at each other was a blast, and getting to watch the game with him and our oldest brother was more than I could ever ask. I can’t think of anyone I’d rather watch a football game with, and I’m 10 times more excited that it’s actually Texas Tech playing the Tigers this time. As GDC said, please take advantage of the awesome LSU fan base while at NRG, eat some delicious food, share your drinks, and be awesome representatives of our amazing university.