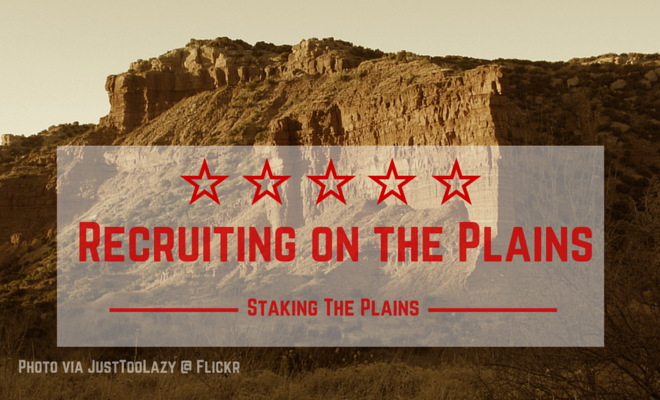 It’s time we take a look at the current commits for Texas Tech’s 2016 recruiting class.

We took a look at the 2016 recruiting class on offense previously. Up today is the defense.

I want to talk about the positions in groups as well because it seems to make more sense to me. Especially because the players commit here and there and it’s tough for me to look at things globally and know who or what I’m getting.

For the first time that I can remember, we’re talking about four defensive tackles. And not tackle projects, but legitimate defensive tackles. Not the kind that you say to yourself, well, they’ll be really good when they can add about 20 pounds and they’ll be ready to go It’s strange to say that maybe the biggest project, at least in terms of getting up to weight, might be Ivory Jackson who weighs a svelte 275. Given his 6’4″ frame, it’s understandable to see how or why it he’s at 275. He’s just tall.

Nevertheless, it’s pretty amazing to see how Texas Tech has four projects that are at least already in the right weight class.

With Mych Thomas, you hope that he’s a guy that can contribute from day 1. It’s a bit of a bummer he can’t join in early, but I’m not complaining. It wouldn’t surprise me to see one of the other three players not redshirt this fall, that seems about right, but I’d prefer that all three freshmen spend time redshirting this next year. If I had to pick one that could play, I’d probably go with McCann, only because he seems like he’s the most put together of the three of them. Wallace is a big kid and he was incredibly productive at his size, but I wonder how that will play into the fast-tempo offenses in the Big 12. He’ll have to keep pace and that might not be easy for him. I also wonder if Jackson could morph into a strongside defensive end at some point. That would be pretty cool.

Pretty excited about this group as well, namely because Jones seems like a natural strong side defensive end just waiting to happen. We always tend to joke a bit about how Texas Tech is recruiting this safety, and if he can just get in the weight room, he’ll make a perfect noseguard. It’s all about the jokes, but in looking at this group and the defensive tackles, it’s not so much a stretch to see that if they add 15 pounds or so, they’ll be legitimate defensive ends.

Miller is supposed to be that rush end and I think that so much of what Miller eventually becomes is largely dependent on how much weight he gains and his burst off the edge when he does gain that weight and strength. I need to see it against Division I competition to get an idea.

The only knock on Jones is that he’s from Oklahoma and there’s always this perception that Oklahoma high school football is a bit of a step down. I guess that’s partly true only because of the population in Texas, but it’s not that big of a step down. Generally speaking, I think Jones is a fantastic prospect.

I remember when Deshay committed, there were some of you that were a bit down on him, and personally, I couldn’t figure out why. He’s got the requisite height, and much like Miller, how he fills out his frame will largely determine where he plays moving forward. Personally, I think that Miller and Deshay are projects from the standpoint that they need to redshirt to figure out where they are and where they eventually want to play.

Henderson is probably the most intriguing of the defensive end group. The only real video that we have of Henderson is him blocking his ass off as a left tackle for Skyline. It’s actually a really fun watch to see the things that he does on the football field. Athletically, he’s truly gifted.

One last thing to consider. Who was the last defensive end that Texas Tech recruited out of high school that weighed more than 250 pounds? Seems like it’s been a while.

So now, we get into some of the more projectable type of players. I think that this is pretty normal and for the most part, guys like Dakota Allen and D’Vonta Hinton really aren’t all that common for teams like Texas Tech, i.e. they’re pretty much already at Big 12 weight when then step onto campus. The lone guy that is like that is Brooks, who already weighs in at 230 and from what I can tell, Texas Tech preferred him over other linebackers in the Houston area.

There’s nothing wrong with projects and I think that Stringer, Picone and Moore all qualify as projects to an extent. I think that Picone is the most ready of those three, then Stringer and then Moore. Admittedly, I love what Moore brings from a defensive intensity standpoint and how he plays the game, but playing linebacker at 190 is going to be tough. At the very least, Picone has about 20 pounds on Moore, but Moore’s got some serious pursuit to the ball and he’ll hit the heck out of you.

We’ve somewhat talked about how Texas Tech targeted taller cornerbacks and all three of these guys fit that mold. They’re all rangy and Fields and Armstrong appear to be very similar in terms of what they can do athletically. I think that Fields might be slightly the better athlete, but they are comparable. Smith might eventually turn into a safety prospect, but he can play corner. He’s a good athlete and this really sorta reminds me a lot like Justis Nelson, but with these guys, their bodies are already ahead of where Nelson is right now. They’s just physically more mature, which means that they should be able to support the run a bit more.