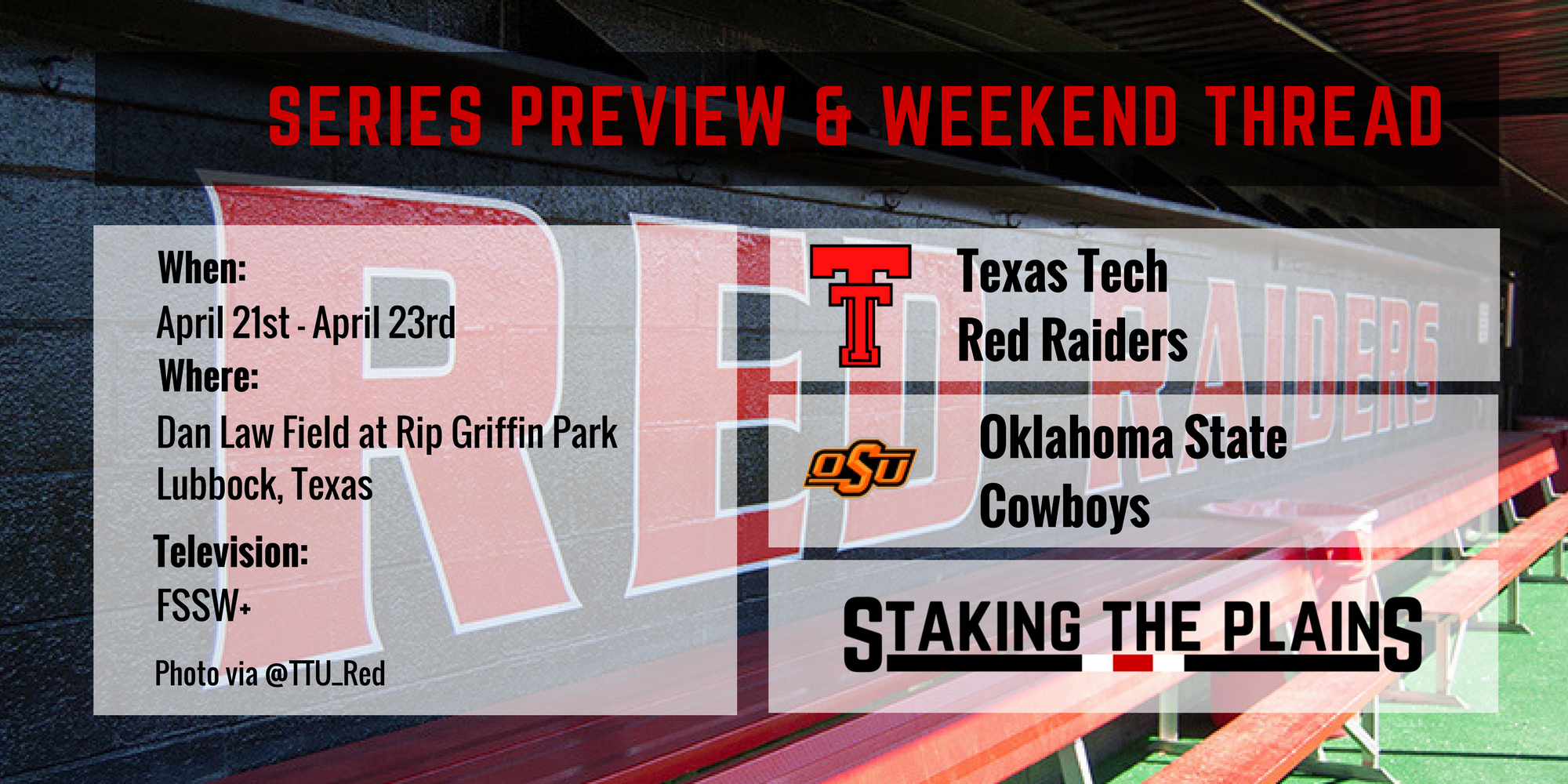 I am all but sure that Oklahoma State did not envision this conference record. The Cowboys were picked to finish second behind TCU in the preseason coaches’ poll and they’ve struggled in conference thus far. Getting swept by TCU, then losing 2 of 3 to West Virginia and Kansas. The Cowboys did win the Kansas State series and they’re capable of winning this Texas Tech series too, especially with Texas Tech down a starter. The Cowboys are down a starter as well as Jensen Elliott, their #2 starter, is out for the year after undergoing Tommy John Surgery.

The Cowboys will strike some folks out and the Texas Tech batters will need to be patient. Texas Tech has a better offense and better overall pitching. The stats for Garrett McCain are somewhat ridiculous.

Texas Tech is getting back to full strength and I hope we see Davis Martin this series, especially since it is before the TCU series next week. Michael Berglund played against New Mexico State and Tanner Gardner played in right field against the Aggies as well.

The only injury that’s a problem is that Davis Martin is still not pitching, at least he’s not starting. I’d love to have his arm this weekend and next weekend for sure.

The LAJ previews the series with the Cowboys and head coach Tim Tadlock talked about the series:

“Really on any given weekend you can get caught up in what the other team is doing and no focus as much on what we need to do to get better,” he said. “Really, the biggest thing we have to do is get better each day and let the chips fall where they may.

“The one thing you can’t do is win a Big 12 championship tomorrow. There is a lot of baseball to be played and you can get of track thinking about things you don’t need to think about. We need to do all the cliches all you guys have heard and continue to play the game the right way.”

Red Raider Sports’ Will McKay previews the series as well and looks at the Cowboys:

Things haven’t been quite the same in 2017 for Josh Holliday’s squad, however, and that starts with things on the mound. OSU just hasn’t been as good from the dish in 2017, and while some of that certainly has to do with the departure of All-American ace starter Thomas Hatch, the rest of the key pieces from the pitching staff returned.

Weekend starter Jensen Elliot has been shelved with injury since mid-March, reliever Trey Cobb is just now rounding back into form after missing time, and freshman Parker Scott has been on the bench due to injury as well. Those are all key injuries that have certainly held the Cowboys back. Saturday starter Tyler Buffett, who had a 2.81 ERA a year ago, just hasn’t been quite as good on the mound for the Pokes this year.

The LAJ also profiles first baseman Hunter Hargrove, who is trying to lead this team to Omaha for the second year in a row:

“I mean I was Gute’s backup so I took some ground balls at third and ended playing some there,” Hargrove said. “Once Gute left I knew I was going to be moved back over to first (base). It has been a good thing over there. I am comfortable.

“I think being penciled in there everyday and have the same routine everyday (has helped) and seeing all the at-bats has really been reassuring.”

Man, this game was all over the place. There was one point where Texas Tech was down 9-3 after the top of the 6th inning and Texas Tech came roaring back to score 6 runs in the bottom of the 6th to tie things back up. The pitching is such a mess in games like this. the only two pitchers to give Texas Tech a clean inning or two was John Henry Gonzalez, who pitched 2 innings, allowing just 2 hits, but he probably got a bit lucky because he had 3 walks. Caleb Freeman pitched the next inning that was clean other than a walk. Other than that, it wasn’t great. Erikson Lanning started and only pitched 1 inning where he gave up 3 runs. Jacob Patterson gave up a 3 run home run and 6 runs in the 6th inning. Jake McDonald took the loss. Texas Tech pitched 7 guys and that probably means that those 7 aren’t available until Sunday.

Gingery had better be ready today.

Josh Jung went 4 for 6 with 2 runs scored and 3 RBI, including a home run. DH John McMillon hit a moon shot that hit the score board. When he makes contact, it’s as impressive as I’ve seen. Tanner Gardner went 3-4 with a run scored and an RBI.

It hurts to miss that one. Texas Tech led 1-0 going into the 9th inning and just needed freshman John McMillon to get three more outs and he promptly walked 2 batters on just 9 pitches (only 1 was a strike). In a perfect word, it would have been awesome to let Ryan Shetter going a bit longer, he only pitched 5 innings and had 77 pitches and was cruising when he was lifted by Parker Mushinski, who was actually really good in relief, goign 3 inning with 3 strikeouts on 31 pitches. Oklahoma State tied it up in the 9th and then Texas Tech called on Jose Quezada, who pitched well enough in 9th and 10th, but allowed 2 runs in the 11th and it was game over. Hindsight is really tough in games like this, especially because things were going so well with Shetter and Mushinski. The offense was completely quiet, only getting 6 hits, and the only run was as a result of an Orlando Garcia homer in the 7th inning.