White pants are 3-0. Never would have thought that. 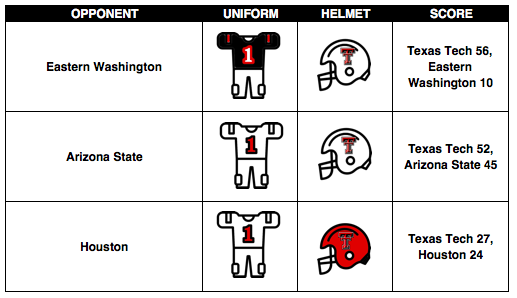 This is the last time that I’m going to go back to the well on this because the story is actually that these guys have become so integrated that there is no longer any delineation, but can we talk one last time about the hits that this staff has had from the JUCO ranks this past year?

It seems like in the past, there was almost always the “one year rule” with JUCO guys, which is that the JUCO guys typically arrive knowing that it will take a full year to adjust before they can really contribute to the team. That means that you typically only get one good year from most JUCO guys. At least that has seemingly been the pattern that had been established by the recent JUCO players. I shudder to think about that defensive line class that Matt Wallerstedt oversaw and ho terrible it ended up being in terms of contributions to this team.

But it’s 2017 and we can start with Desmond Nisby and Tre King rushing for about 100 yards each and being the second and third leading rushers for Texas Tech. Jacob Hines started two games at guard before Madison Akamnonu, plus Paul Stawarz has started the first three games at center, both did and have done admirable jobs.

Dakota Allen may be the leader of the defense and is second with 20.5 tackles, 2 tackles for a loss, 4 run stuffs, and 1 interception. He’s different because he’s been here before, but his transformation has been significant. You’ve got co-starters in Octavious Morgan, Jaylon Lane and Vaughnte Dorsey, all either starting or seeing significant time in the secondary and not just playing okay stats, but playing significant snaps, and these three players are fourth through sixth in tackles on this team. And then Tony Jones, who has been a dynamic playmaker who has just been around the ball at the right time and at the right place.

You would think that with the preseason over that these guys continue what they’ve started. I don’t think the shine will come off these players as Texas Tech gets into conference play. And the season is hardly even close to being over, but David Gibbs deserves a ton of credit of identifying players that can not only just play, but contribute significantly and be big parts of the defense. That’s no easy task and it’s not something that I think should go overlooked.

It seems to me that Rudolph is really good at the deep and over the middle pass. OSU folks may really hate this comment, but the Oklahoma State offense this year slightly reminds me of Baylor’s offense of a few years ago. The wide receivers are so good at getting open, it seems like more times than not, the receivers are running post routes or just fly patterns where Washington or Ateman are just one-on-one and they can run so fast.

Rudolph is very good at escaping from pressure, he’s more mobile than maybe you give him credit for being. He seemingly escapes near sacks and then is capable of scrambling for more time or running for a first down. He’s a capable athlete for sure.

I think the running game last week was underutilized and I wouldn’t be surprised to see Justice Hill be more involved in the offense. He can be incredibly dangerous and make people miss. I think Hill is one of the better backs in the Big 12.

It seems as if Rudoph is getting hit by the defensive line and seems to be under pressure quite a bit. It will be key for Texas Tech to make sure that they are absolutely getting pressure on Rudolph because a clean and free pocket for Rudolph is probably not ideal.

Again, just look at all of the over the middle and deep passes that Rudolph likes to throw. So many big plays come from that aspect of the Oklahoma State offense.

Rudolph is really good at finding those guys, but they’re almost exclusively over the middle and not to the sidelines like Wilkins did against Arizona State.

Defensive backs may have the same problem that most DB’s have in the Big 12, which is that stopping these receivers is incredibly difficult. I don’t know that they’ve seen someone like Keke Coutee offensively and that ill be interesting to see if they can keep him contained because I’d guess that he might get some bracket coverage here real soon in the Big 12.

Defensive line may be susceptible to big plays because they reach and aren’t patient and I think the defense is very aggressive. A lot of TCU’s big plays were because the TCU running back just danced a bit around the line of scrimmage, was able to make the first wave of defenders miss and then the running back would just break things open.

“Just as a review to last week, it was really pretty much what we thought for the most part. We had three turnovers when the game was still rolling. The last one was in a hurried situation. We had that additional turnover on the punt where they got it inside the 30 or the 35-yard line, and that’s just like another turnover. So that’s four to their one, so we were minus-three. We also had multiple chances to get off the field on third downs and we didn’t. Offensively, we were just a step away five or six times from a five-yard run being a 15- or 20-yard run. When you snowball all of that together, that’s what happens to you. Obviously, they did a better job of coaching than we did because their kids executed their game plans better than ours. In looking at the game, there’s a lot of areas and a lot of things that we can correct, which is good. We’ll work toward that and the players were back at it with practice last night. The attitudes were good and we have our hands full again this week like each week. There’s a tremendous amount of parity in our league. I haven’t really seen anybody play, but I know that from here on out for us each week is going to be a dogfight. We have to have a great week of practice and our coaches have to have great game plans. We have to take care of the football and get off the field on third downs to give ourselves the best chance to play well and win games. Tech is similar to what they have been. Their quarterback throws the ball really well and has tremendous skill. They do a nice job with play calling and mixing things up and I’m fairly certain that their defense is improved. They understand their schemes and are able to get to the football. They went to Houston and won on the road and beat Arizona State. ASU has a really good offense and they get good quarterback play. It’ll be a good game and we need a good week of practice and we’re looking forward to getting back out there.”

On what he’s looking for in his team to see that they’ve moved on from last week’s loss:

“I think they have. The outside world takes wins and losses differently than we do. Every Saturday, half the teams in the country lose, so half the teams in the country have to go back to work on Sunday and Monday or it’s not fun the next week. We try to stay level-headed, even with wins. People outside the program go crazy when we have big wins and start making hotel reservations for this or that, but in our world, we have a body of work that we have to get accomplished every week. I hope our guys understand that from the history of our program, and I think they do. I think you’re going to see eight weeks from now that there’s going to be a lot of parity in this league. It’s going to be exciting for fans, but it’s going to be hard on the coaches because there’s a lot of teams in the same boat. It’s going to be based on the health of your team, turnovers and key plays on special teams. We’re one of those that’s right in the middle of that.”

It’s really difficult to predict a winner for Texas Tech in this game. The line has fluctuated wildly with Oklahoma State as a near 2 touchdown favorite and then that line moving down to 8.5 and it has now pretty well settled at 10.5. I think that Oklahoma State is a better team, they should be as they’ve had years of success to build off of and I’ll take the Cowboys, but it will be close, something like 43-38. I like Texas Tech’s chances and I think they’ll be in this game. Much will depend on if and how well those JUCO guys can make some plays. They’re so critical.