A 7 point preview of Texas Tech vs. Texas.

A different uniform combination for every game. 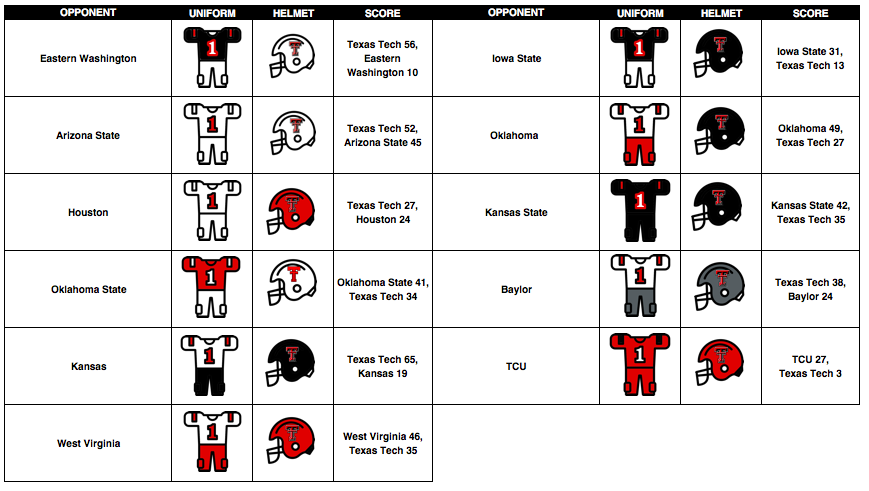 I remember writing right after the Houston game how fun this was and bak then, I was pretty confident of what Texas Tech had in terms of a team. It appeared that the defense had turned a corner and the offense was one where it was competent enough to put points on the board and secure wins or win in blow-out fashion, a.k.a. Arizona State.

Lots has happened since that game and here we are speculating what will happen after today’s game. I’ve written before that I thought that Kingsbury was coaching for his job for the Kansas State game and so my opinion of the situation hasn’t changed. Sagging attendance and that comes off of sagging season ticket sales plus a current losing record with a chance of going .500 with the final game of the year. I really thought that anything at or north of 7-5 would have kept Kingsbury his position, but at 5-6 with the hope of going 6-6 for the year simply isn’t enough.

And it probably isn’t enough because Texas Tech doesn’t appear to be any further along in the standings while a team like Iowa State has promptly moved past Texas Tech with a newer head coach, the same could be said about Texas.

But in this season of thankfulness, I’m incredibly thankful that Kliff Kingsbury was the head coach of Texas Tech. Kingsbury has been everything I wanted in a head coach, he just hasn’t been able to turn games into wins (obviously a huge aspect of the entire situation). Kingsbury has been a steady hand and I do think that if someone ends up taking over the program, the won’t find an empty pantry of players, but a relatively young offensive line that I think will only get better. A relatively young defense that should also improve. As mentioned the other day, the biggest thing that Kingsbury hasn’t done is recruit up to par, dropping in the 40’s in terms of recruiting rankings, but we’ve always just sort of trusted that Kingsbury is just getting “his guys” and never really criticized him or the staff for a lack of higher rated players.

Deep passes and a little bit of trickery from Texas. I guess Texas Tech will need to really watch out for that . . . Again, see how the offense utilized that running back out of the backfield up the seam, pretty nice but simple play . . . would love to force some of those terrible quarterback decisions . . . be ready for some zone read stuff, lots of it . . . I still think the running backs are better than what their stats have proved out this year . . . there are probably some windows that will be there against Texas, but you cannot hold onto the ball and that will largely be on Shimonek and Kingsbury, find it early and get rid of it . . .

Gonna test those corners, no doubt about that . . . the Texas defense is sitting in that zone defense and that’s a problem for the KU quarterback and Shimonek will need to be careful . . .

The Texas defense is very aggressive and it would sure be nice to use that against him, but that requires some misdirection and some trickery and I don’t feel like we’ve seen that in quite some time . . . Texas will absolutely test the cornerbacks, they had better be ready . . . delayed blitzes could be really beneficial against these UT quarterbacks . . . block things up and you can do some things against the Longhorns . . .

It’s all video for Tom Herman (I couldn’t find anything) so let’s end with what the players are thankful for. These guys are our brothers and I hope they kick some tail today.

The line has moved to around 9.5 or 10 with Texas favored. Personally, I think Texas Tech will have have a tough time scoring again. This Texas defense is pretty danged good and at this point, I think Texas Tech is sort what they are. Shimonek is going to have to absolutely ball-out if Texas Tech is going to win this game. I don’t know about that. I’ll take the points, but I think the Longhorns win something like 27-21.