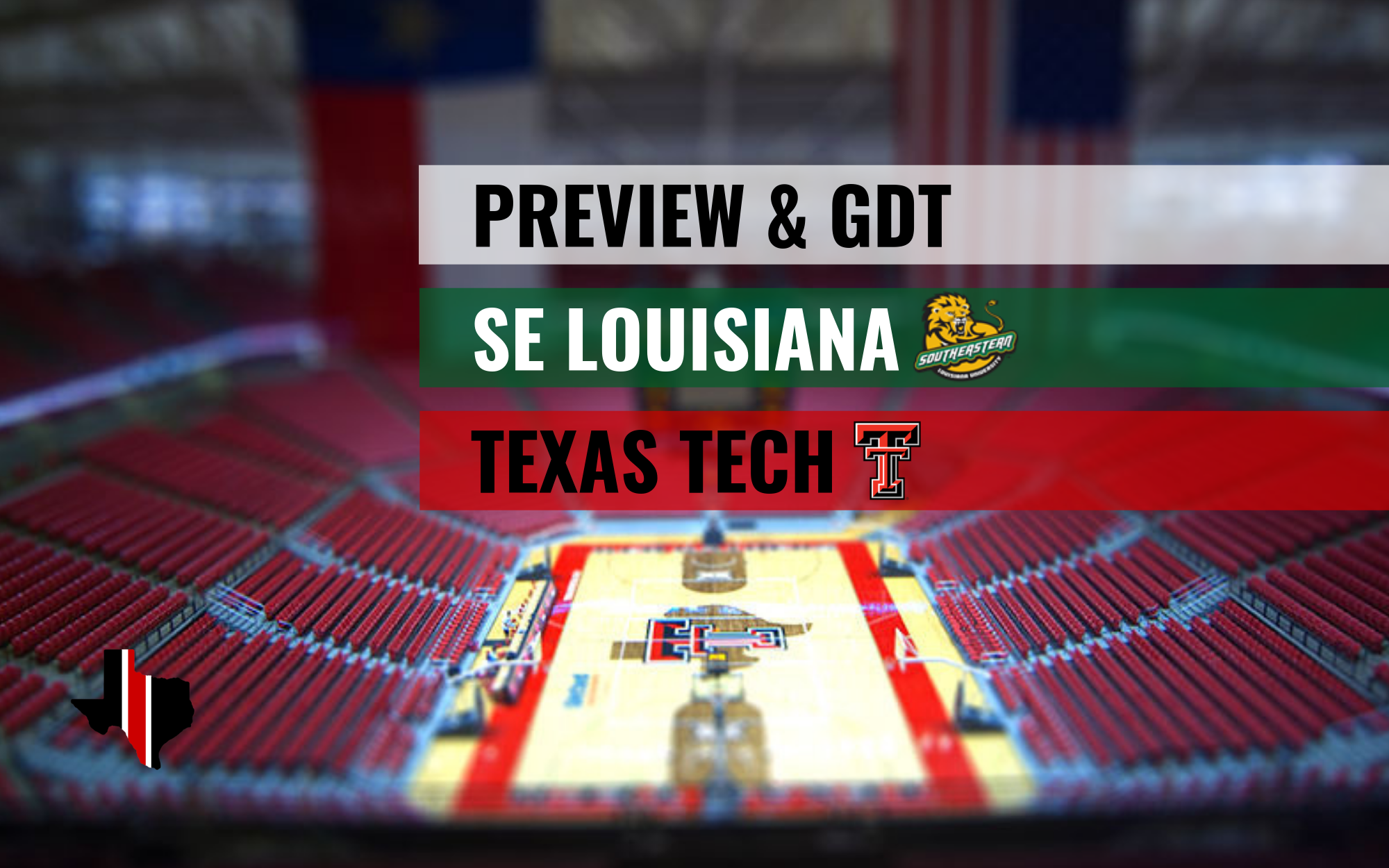 How to Watch: FSSW

The Line: None (OddsShark)

1. Stats. Head coach Chris Beard is technically correct in that SE Louisiana is the best team that Texas Tech has played thus far, but they’re still, at least on paper, a terrible team and they were absolutely blown out by Nebraska (who may be okay to good) 87-35 on Sunday. So it’s a relatively quick turnaround for the Lions as they probably didn’t go home, just came straight to Lubbock for tonight’s game. And as you’ll note, the Lions are pretty much terrible at offense and defense

2. How They Match Up. This is another pretty small team for Texas Tech to play as no one is over 6’8″ so the post players aren’t exactly going to get tested just yet. I think I’d like to see Culver maybe get a few more clean shots and start making some open jumpers. It seems like he’s not hitting as many open shots as he did last year (I’m probably affected by Culver’s last outing, which wasn’t great), so I don’t know if this is an early season trend or something else. What is improving for Culver I think is his ability to fill up the statsheet, contributing from a distribution standpoint and rebounding the ball. If Culver is proven to be an effective passer, that makes him incredibly valuable as an off-guard. And let’s see Brandone Francis get back on track after a bad game against Mississippi Valley State. We need him in a great frame of mind.

3. Scouting. Maybe the most interesting thing will be to see Marlain Veal who is a normal sized human being playing against all of those trees and maybe how Moretti would play him, presuming that Veal is probably pretty quick. Edwards is a true freshman who seems to be scoring a pretty good pace and I’d guess that Culver will do what he does and shut him down. Edwards is shooting the ball at a 52% rate and 53% from the three-point line, so that’s going to be a pretty nice match-up. Greenwood is a very good rebounder, but there’s not much else inside.

“This third game, is the best team we’ve played to this point. No disrespect to the first two opponents,” said Beard, whose squad has notched triumphs over Incarnate Word (87-37) and Mississippi Valley State (84-52) to start off the season. “This a team that won their conference championship last year, returns three starters. Our program, our players and our fans are very familiar with Stephen F. Austin. This is the team that won their league last year.”

The Lions (1-2) have faced off against some top competition, dropping their season opener on the road to LSU (94-63) before bouncing back with a road victory over William Cary (78-57) until suffering their most recent loss to Nebraska (87-35) on Sunday. LSU is ranked No. 22, while Nebraska is receiving votes in the latest AP top 25 poll.

#FiresideChat With @CoachBeardTTU: Info on Tuesday’s 🏀game, congrats to @Stollings and @LadyRaiderWBB and a new Song of the Week feature that highlights @lilbaby4PF and @merlehaggard are among the topics discussed by the 🔥 this week. #4To1 pic.twitter.com/lcZuq0guD9

5. Official Site. Before we get to the official preview, in Chris Beard’s Fireside Chat he reminds students who are 21 and over that there’s beer for you guys/gals and free food for all students (not free beer, just food), plus references to Lil Baby and Merle Haggard, who artists who have probably previously never shared a sentence. The official site has their preview right there:

The Red Raiders are 2-0 with a 41-point scoring margin through two games, while the Lions (1-2) are the defending Southland Conference regular-season champion. SLU arrives in Lubbock after opening their season with road losses at Nebraska and LSU and a win over William Carey on its home court. Texas Tech is coming off an 84-52 win over Mississippi Valley State last Friday after beginning the year with an 87-37 victory over Incarnate Word. Texas Tech is averaging 85.5 points per game and is shooting 54.5 percent from the field, while opponents are at 44.5 points per game and a 30.1 percentage.

Texas Tech is 2-0 all-time against Southeastern Louisiana with the Red Raiders taking a 62-54 on Dec. 30, 2011 in the last meeting. SLU won the Southland Conference regular-season title last year with a 15-3 conference record. The Red Raiders are 1-0 against Southland Conference opponents this season and is 71-23 all-time. Tech will also play Abilene Christian on Dec. 15 in a “Throwback Game” at the Lubbock Municipal Coliseum.