Let’s add them all.

The Big American Conference is here. I think it was expected, but you have every right to be disappointed. I know that I’ve properly prepared myself for this outcome, much in the same way that I was prepared for Chris Beard to hightail it to Austin.

This is obviously a huge issue for Teas Tech and although I’m concerned about a lot of things, I’m mostly concerned about the debt service that Texas Tech still owes, but the university can cover those expenses if it’s required (I would hope).

Avalanche Journal’s Don Williams (through USA Today) has the quotes from yesterday regarding Texas Tech athletic director Kirby Hocutt being part of a committee to explore expansion in the Big 12:

“Right now, our complete focus is to make the Big 12 as strong as it can possibly be,” Hocutt said, “and I expect that Texas Tech will play a leadership role in that. We’re going to continue to be part of the Power Five structure in college athletics.”

Hocutt said Baylor AD Mack Rhoades, Kansas Chancellor Doug Girod and Iowa State President Wendy Wintersteen are the others on the subcommittee. The Big 12 in the past few days has enlisted Oliver Luck, the former West Virginia AD and XFL commissioner, as a consultant to aide in working through realignment.

And Hocutt also acknowledged that the college athletics is obviously changing, Texas Tech had stuck with Texas when the Pac-12 offered the last time and that type of loyalty didn’t pay off for the remaining Big 12 members:

Hocutt took thinly-veiled shots at the movers and shakers behind the latest realignment moves. He said that trust has been broken “and without trust, there’s very little relationships.”

“I’m not sure that we’ve ever seen so much distrust and just turbulence within college athletics as we’re seeing now,” he said, “and it’s really unfortunate, the lack of relationships and trust. I think we’ve got to really re-establish some foundational aspects of college athletics as we move forward because things are changing and they’re changing fast. It’s a different time, and it’s going to be different in the next five or 10 years.”

ESPN’s Heather Dinich tweeted that the Pac-12 not expanding “saved” the Big 12:

Pac-12 new that if it expanded, Big 12 would implode. They didn’t do it. Big boost to Big 12 chances of remaining viable league IF they can lure in AAC teams. If AAC teams get B12 teams and make push for autonomy, all hell can break loose again.

There’s definitely part of me that the Big American Conference or the Heartland Conference or whatever the Big 12 Conference becomes (and yes, I think the conference should shed their name) will be fine. BYU, Cinncinati, Boise State, etc. can all add value and the football will still probably be better than what’s expected.

Dallas Morning News’ Chuck Carlton confirmed that that the Big 12 is likely to survive and of course the working groups were confirmed by Hocutt:

Now get ready for Big 12 expansion talk again, with schools like Cincinnati, BYU and Central Florida among the most likely candidates, depending on whether the conference goes to 10 or 12 or 14 schools. A host of others could have an interest.

Industry sources confirmed that the conference formed working groups to look at options following the defection of Oklahoma and Texas to the SEC, including one focused on potential expansion candidates.

In other words, the Big 12 is likely to survive but with new faces and new places — and a significantly reduced TV contract. Maybe the new Big 12 can find other revenue sources in the next few years. Who knows?

This proposed map from a San Diego State alum is a good start in terms of what I think should happen. 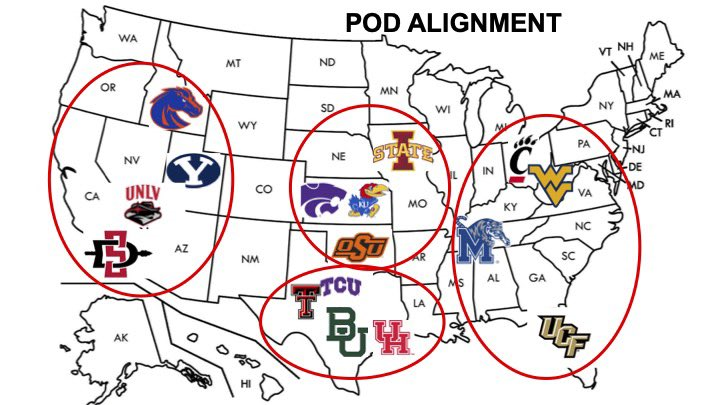 With the news that no one likes Houston because of Tilman Fertitta is an absolute jerk, could hinder their chances, but I’m not going to get too caught up on who “deserves” to be part of the new conference and who doesn’t. I think generally speaking, there’s a pool that we can sort of agree on and then the rest is just finalizing those candidates. You could add SMU for Houston and I’d be fine with that, or just not add another Texas school and add Colorado State or add two Florida schools, UCF and USF are possibilities. Regardless, there are options.