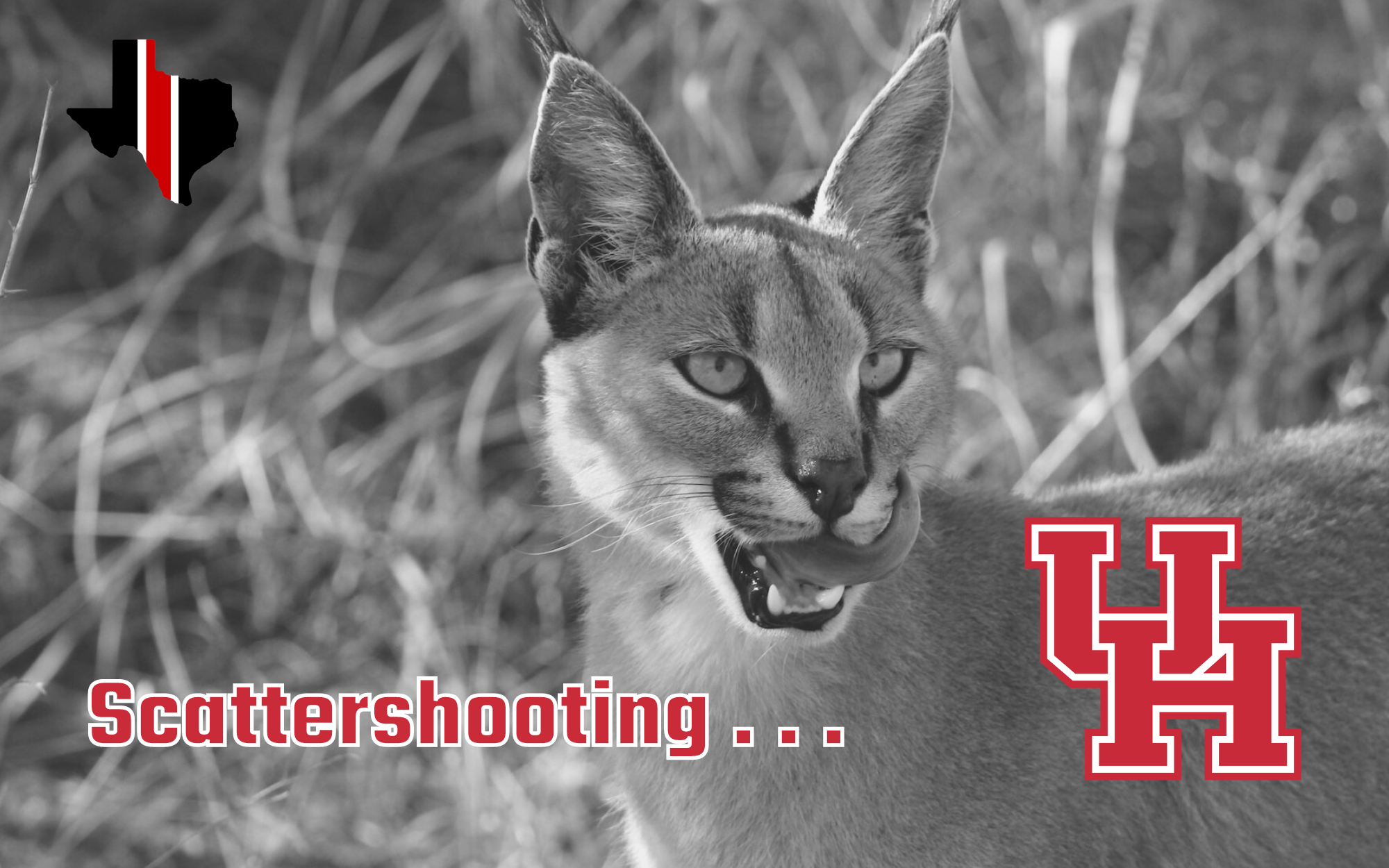 Probably not a cougar, but definitely a big cat.

One of my favorite athletes to watch growing up was Hakeem Olajuwon. that’s despite being a Dallas fan and essentially hating when he would beat my lowly Mavs with Sleepy Floyd and Vernon Maxwell. Olajuwon grew up in Nigeria playing soccer, a goalie. As a collegian at Houston he worked out with Moses Malone, a then-Rocket, where he learned his craft. Despite me being a 5’9″ guy with no inside post moves, watching Olajuwon do the dream shake was a thing of beauty and his quickness on the baseline was unmatched.

As far as Hakeem right now, apparently he is a real estate mogul in the Houston area.

Comeback Cougars. Houston hosted UTSA and squeaked by the Road Runners in three overtimes. Raise your hand if you think that Jeff Traylor and Joey McGuire might find to talk for 15 minutes this week. I watched zero seconds of this football game, but the Cougar’s quarterback threw for only 206 yards, but did have 3 passing touchdowns, Houston ran for 140 yards, while the defense gave up 337 yards to UTSA. Houston had 1 turnover, 11 penalties and dominated the time of possession by 10 minutes.

Houston Things. I think that this game opened as a pick’em but now Texas Tech, with their back-up quarterback, are favored by 2.5 . . . this will be a pretty pivotal game for Houston as this is likely their toughest game of their schedule, which isn’t to say that they won’t lose another game, but this is it and I think they’ll likely be very fired up for this game . . . after 1 game for each team, ESPN’s FPI has Houston at 47 overall with Texas Tech at 38 . . .

Big 12 Things. Oklahoma State had trouble with Central Michigan, after exploding for 44 points in the first half and up 44-15, the game ended 58-44 in favor of OSU . . . Pittsburgh outlasted West Virginia, which was a wildly entertaining game. WVU may have a quarterback that does wild-assed things and I’m sort of here for that . . . Kansas easily dispatched Tennessee Tech 56-10, Baylor dominated Albany 69-10, Iowa State dispatched SE Missouri 42-10, and Kansas State took down South Dakota, 34-0 . . . one of the best on-paper games was TCU at Colorado, but CU is pretty well a mess and after a tight first half, TCU pulled away and won by 25, 38-13 . . . The Brent Venables era opened with OU easily handling UTEP 45-13 while Texas took down UL Monroe 52-10 . . . I am interested in the new quarterbacks at UT and OU, with Ewers having a QBR of 72.4 and Dillon Gabriel had a QBR of 71.0. If you were at all curious, Donovan Smith had a QBR of 98.8 and Tyler Sough at 95.2 . . .

Upcoming Big 12 Things. Alabama travels to Austin to take on the Longhorns and Bama is favored by 20 . . . Missouri is in Manhattan to take on K-State as the Wildcats are favored by 8.5 . . . Iowa State and Iowa play their annual game with the Hawkeyes and their struggling offense favored by 3 . . . Kansas and West Virginia start conference play with WVU favored by 13 . . . Oklahoma State hosts Arizona State with the Cowboys favored by 11 . . . Baylor travels to Provo to take on BYU with the Cougars favored by 2.5 . . . TCU hosts Tarleton and Oklahoma hosts Kent State in likely blowouts . . .

Ruffin. You should definitely read this article from ESPN’s Andrea Adelson about Ruffin McNeill moving back to North Carolina to go be a parent and take care of his dad. It will break you heart and it will also make you realize that Ruffin blessed this university with so many years with his presence . . .

Non-Game Things. Centennial Champion is having some issues. Watching CC run onto the field, he seemed tepid at best and wasn’t really galloping. I thought that this was maybe part of the plan to not let him run full throttle as he runs onto the field, but the gait didn’t quite look right, and this is coming from a guy who knows nothing about horses. In the first half, CC came onto the field and he really didn’t want to be out there, some of the other handlers were nervous about getting behind him and at some point, one of them was able to get his reins to lead him in. I’m guessing it was way too much stimulation . . . speaking of stimulation, I am always taken by how much sound and DJ’ing there is at the game. It is constant other than the 20 seconds it takes to run a play. It’s almost too much for me, but it was not too much for Youssouf . . . I was so happy that I was able to shake hands with Kyle Jacobson, Rob Breaux, Spencer Rogers and Michael McDonald. Also making an appearance at Cardinals was Dan Briggs, his friends, and son Ryan . . . Henry Colombi transferred to Marshall and the Herd won with Colombi going 24 of 26 for 205 yards, a pick and touchdown . . .