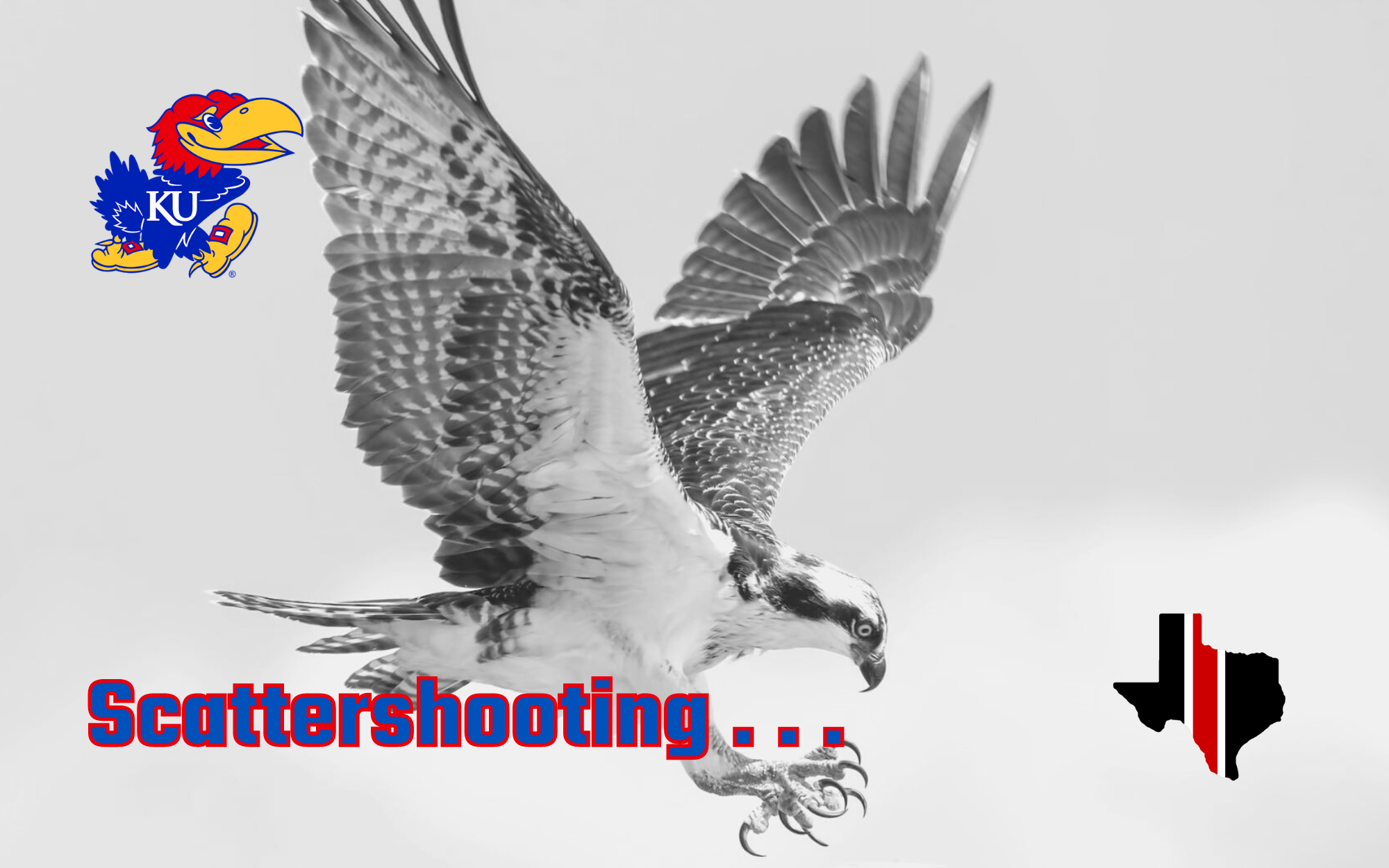 Sadly, Gale Sayers passed away in 2020, but I’ve never watched video or done any research on Sayers and thought this was as good of a time as any. Sayers was born in 1943 in Wichita, Kansas, his father a mechanic for Goodyear. Sayers ended up at Kansas from 1962 through 1964 where he ended his career with 2,675 yards and 4,020 all-purpose yards. A three-time first-team All-Big 8 selection. In the NFL he was drafted in the 4th round by the Kansas City Chief of the AFL, but wanted to play for the NFL and signed with the Chicago Bears.

I’ve never watched video of Sayers and what an absolutely beautiful runner. He was 100% ahead of his time and I love watching runners who are fluid and the way he moves is what it means to be athletic. Oh, and the way that he moves on those fields in the mud are also pretty incredible (sorry, but apparently you’ll have to go to YouTube to watch the video)

Kansas Things. there’s no Jaylon Daniels, but Jason Bean appears to be producing at that position about the same, both have thrown for about 1,000 yards, both are completing 66% of their passes, both average over 9 yards per attempt, both have 11 touchdowns and as a team, they’ve only thrown 4 interceptions . . . and also unfortunately, it appears that running back Devin Neal is fully operational, running 32 times for 224 yards Saturday against Oklahoma State . . . OSU didn’t have Spencer Sanders, but I don’t know how much that would have mattered . . . Texas Tech is currently a 3.5 or 4.0 point favorite . . .

Up & Down in the Big 12. Texas pretty well hammered Kansas State, which I’m a bit surprised at, especially in Manhattan, 34-27. Texas jumped out early and KSU made an attempt to come back, but just didn’t have enough. Bijan Robinson was the focus of the offense for Texas running for 2019 yards on 30 carries . . . We’ve already mentioned Oklahoma State’s issues in missing Sanders. I’m not sure how long he’ll be out, but they probably need him if they want to be in the race, which may be too late . . . Baylor shut down Oklahoma in Norman, 38-35 behind a strong running game of 281 rushing yards. That’s going to be really difficult to stop for a lot of teams. Oklahoma put up good numbers offensively, but obviously not enough . . . Iowa State is no longer winless in the Big 12, taking care of business against West Virginia with a huge 4th quarter where they scored 21 points. West Virginia is going to have to do something about Neal Brown . . .

Internet Things. Texas Monthly’s Jose R. Relat tells the history of Bolner’s Fiesta Brand Spices and I put this stuff on everything. The Fajita and Steak seasoning are my favorites and these two opening paragraphs are the stuff of dreams:

Clifton Bolner wanted out of the grocery business. He had worked for his grandfather, Joe Bolner Jr., since he was a child, and, with typical Texas swagger, he was looking for a way to prove his own worth. Joe had immigrated from Italy to Mexico and then settled in San Antonio, opening a grocery store there in 1906. After graduating from Texas A&M University in 1949 and serving as a second lieutenant in the Air Force, Clif, as he was known, felt there wasn’t space for him in his father’s business. Then, in 1955, 25-year-old Clif saw a newspaper advertisement announcing that a fledgling spice company housed in a 1,200-square-foot building was for sale by its retiring owner, Mr. Van Zandt. The asking price was $25,000. After completing negotiations, Van Zandt and Clif agreed on a much lower price of $3,000. It was twice as much as Clif had to spare, so he borrowed the rest. Clif got the keys and an agreement from Van Zandt that they would meet at the building the next morning to review accounts. The old man never showed, but he had cashed the check. It was 9 a.m, and Bolner’s Fiesta Brand spices was born.

Clif walked ten blocks to a Piggly Wiggly and enthusiastically introduced himself to the produce manager, who was not pleased to see him. It had been eight weeks since Van Zandt’s last delivery. Undeterred, Clif promised the man he’d be there every Monday at 8 a.m. to stock the shelf. To make good on his word, Clif had his family pitch in, even his school-age son, Tim. “I was five years old and putting black pepper in bags,” recalled Tim, who is now president of Bolner’s Fiesta Products, the parent company of Bolner’s Fiesta Brand. The other products included whole cumin, whole anise, cinnamon sticks, a garlic blend, a salt blend, a quick chili mix, and menudo seasoning.

Other Observations. Stick with it? that’ smore of a question than a request or a demand. Demands don’t seem to work very well, especially on the internet with you being there and me being here. I intentionally stuck around this year with the sole purpose that I was excited about the hire and I was excited about starting fresh. I’ll be honest, I still am, but maybe that’s because I can still remember what it’s like writing about a Matt Wells game where there was little to no direction or clear definative plan. I know none of this is going to make you feel better about the past 3 weeks, but as a person who wrote about those losses almost each and every time, it was a true grind at times. Regardless of whatever happens this year, I still feel better because I feel like there’s some true direction