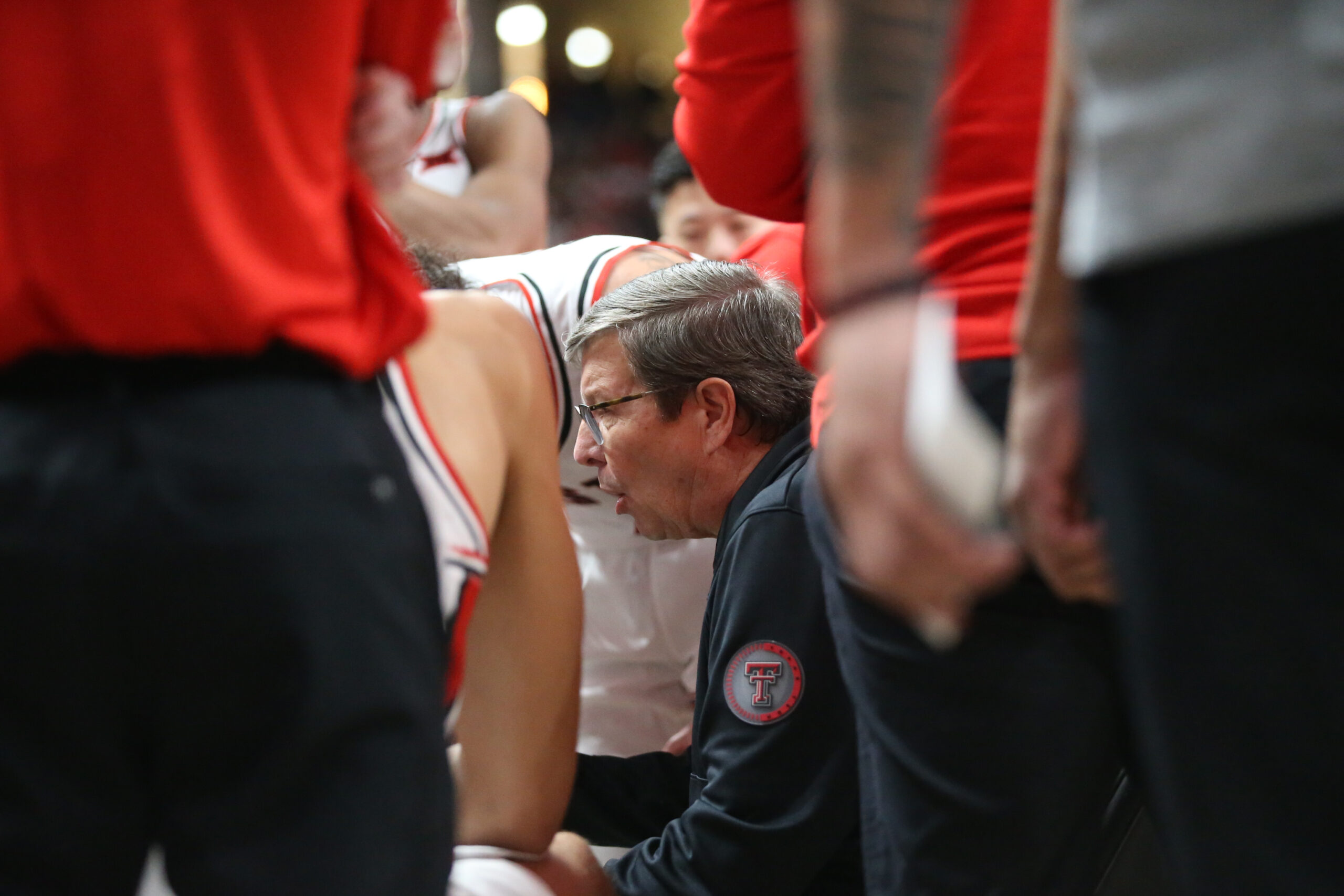 Texas Tech’s meteoric rise to the heights of college basketball is the kind of climb that redefines a program’s perception. The Red Raiders have won 11 NCAA Tournament games over the last four seasons that the dance was held. The program hasn’t had a losing season in seven straight years. Of course, there’s been heartbreak, shortcomings and pain — this is still college basketball — but it’s been many more ups than downs for the Red Raiders over the last few years. Perhaps that’s a big reason why this season feels like such a surprise.

The Red Raiders are 0-4 to start Big 12 play for the first time since 2015 when they finished the season with just three conference wins. The team has collectively turned the ball over 65 times in those four games, with only 39 assists to show for it. Their cakewalk of a non-conference schedule has a win against Louisiana Tech at the top of their resume in mid-January. Sure, it’s early, but Texas Tech is facing the very real possibility of missing the tournament for the first time since 2017.

What’s gone wrong? How have things seemingly fallen apart so quickly? Just last year, Texas Tech was undefeated at home and took a Duke team full of NBA players down to the wire in the Sweet 16. It’s no surprise that the Red Raiders were subject to the churn of college basketball last offseason. Key seniors Bryson Williams, Adonis Arms, Davion Warren and Marcus Santos-Silva exhausted their eligibility, while Kevin McCullar, Terrence Shannon Jr. and Clarence Nadolny sought a change of scenery. The roster looks drastically different this season, something fans of the program have had to grow accustomed to. But what’s unsettling is that the product of basketball this season has been unrecognizable from the standard the program has set for itself.

Texas Tech and elite defense have gone hand-in-hand over the last few seasons. That trend seemed likely to continue with Mark Adams — the so-called architect of the no-middle defensive scheme — taking over as the program’s head coach last season. Year one was a success, as Texas Tech finished the year with the best defensive efficiency in the country. Year two is dangerously close to ending up as one of the worst defensive years in the program’s recent history.

On paper, the numbers aren’t terrible. As of publishing, Texas Tech is 36th in KenPom’s Adjusted Defensive Efficiency. That’s a placement many programs would be happy with, but it’s lower than the Red Raiders have ranked in years. So far this season, Texas Tech is holding opponents to 41.1% shooting from the field (81st out of 363 DI teams), 46.5% on two-point attempts (87th), and 32.9% from deep (171st). Viewed in a vacuum, those numbers are average at worst. But the problem is that over the years, Texas Tech has relied on elite defense to compensate for the lack of offense. This year, the Red Raiders are scrambling on both ends of the floor.

Texas Tech is currently scoring 107.1 points per 100 possessions. If the season ended today, that’d be the worst offensive efficiency in a season by the Red Raiders since 2014-15. The offense has been generating high-quality shots, totaling an effective field goal percentage of 55% so far this season (23rd in DI). The problem is they aren’t getting enough of them.

The offense is playing slow, which comes as no surprise to those who have watched this program for the last few years. The run-and-gun offense Steve Green was expected to bring to the program didn’t seem to make the trip from Levelland. Texas Tech is 302nd in the country in field goal attempts per game and 236th in three-point shots per game.

There’s been so much ink spilled about the turnovers this season that this paragraph may be beating a dead horse, but it needs to be addressed. Texas Tech is turning the ball over on 20.8% of its possessions, placing them at 298th in turnover rate. The only player who has multiple assists and a positive assist-to-turnover ratio in Big 12 play is true freshman Lamar Washington (8 AST, 3 TO). Kevin Obanor — the most experienced player on this team and one of the more experienced players in the conference — has 2 assists to 17 turnovers in four Big 12 games this season. A big man being responsible for that many touches indicates something concerning about the scheme, but it’s still an issue that’s hindering him from becoming the player I’ve been waiting for him to be.

Reviewing the numbers on this team feels like drinking bad information from a fire hydrant. Maybe it’s wishful thinking, but it sure feels like this team is playing the worst basketball it can. Things could stay the same, I don’t want to think about them getting worse, but I also believe there are feasible ways they can get better.

Protecting the basketball seems like the best place to start. I think that begins with Pop Isaacs. Asking a true freshman to be your main offensive engine in this conference is a tall task, but I’m not sure what other option the team has. De’Vion Harmon looked promising as a primary ball handler throughout non-conference, but he’s looked lost early in Big 12 play. I’m excited about Lamar Washington’s future as a ball handler, but he hasn’t spent much of his career playing true point guard.

Isaacs has gone through some growing pains this season and I’m sure they’ll continue. Even when he makes a reckless pass, he sees and processes things on the court at an NBA level. That combined with his ability to shoot the ball makes him a handful if you can stretch the defense. I’m okay with his occasional bad play because I think your best chance at winning is with him on the floor.

De’Vion Harmon’s young career at Texas Tech has been defined by very high highs and very low lows. The Red Raiders would’ve been run out of the gym by Oklahoma without Harmon, but he was also a complete no-show against TCU and Kansas. He’s irreplaceable in transition offense and has shown flashes of elite on-ball defense, but his half-court offense has been unimpressive. That has to turn a corner for Texas Tech to win games.

Jaylon Tyson can play better. This isn’t the same player I watched in high school or the same player that looked like an All-Big 12 player during the off-season. Tyson has been efficient throughout the season; he’s just been too quiet. He’s 10-of-30 from the field and 3-of-13 from deep in conference play. In a year where Texas Tech needs all the points they can get, his ability to score at all three levels needs to become an asset.

Daniel Batcho’s improvement on the defensive end has been stunning. He was one of the most agile big men I’d seen as a freshman, and now he’s developed some exceptional shot-blocking instincts. The staff calling him an NBA player this off-season likely caused some unrealistic expectations around his offensive game, but he’s proven to be a key contributor. The pick-and-roll with Batcho involved still seems to be one of the most reliable sources of offense for this team. I’d expect that to be drawn up much more often down the stretch.

The depth of this team hasn’t been a strength throughout the season. The Red Raiders have scored 246 points in Big 12 play so far. 192 of those have come from the regular starting lineup of Harmon-Isaacs-Tyson-Obanor-Batcho. Young players like Robert Jennings and Washington have become key components in the rotation. Experienced transfer additions D’Maurian Williams and Kerwin Walton have been quiet, especially when it comes to shooting the ball, which is something this team desperately needs.

The last looming factor in determining Texas Tech’s ceiling is the return of Fardaws Aimaq. After breaking his foot in November, Aimaq finally returned to practice this week. If he’s healthy, Aimaq should provide some help on the boards and in pick-and-roll actions. Yet I find myself still in wait-and-see mode with Aimaq. He’s a good player, but I don’t think you can bank on a player who has played 5 career games against Power 6 competition and is coming off a serious injury to be your savior.

Things seem grim right now. Sure, the program has seen much darker days than these. Sure, the season is far from over. Sure, this is a talented team that can end the year with something to hang their hat on. But it’s time to pull the pin. Something, anything has to change for this program to end the season on a high note. The numbers aren’t trending in Texas Tech’s favor. A Saturday night game that means a little bit more is a perfect opportunity for the Red Raiders to gain some momentum. Let’s see if the parachute deploys.