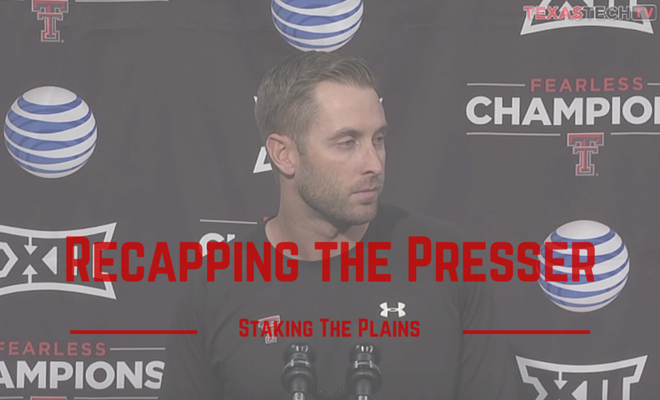 We recap yesterday’s press conference, including talk of The Pistol and you should expect a bunch of players to play on Saturday.

1. Kingsbury hasn’t named a quarterback starter and he won’t do that until Saturday when one trots out on the field. He said that whoever it is knows that he’s going to start, but the rest of the team doesn’t know. The advice here is to just drink a lot between now and Saturday. And be sure that whoever he chooses won’t be pulled quickly:

No, there won’t be a quick hook. We feel like both guys can play, and we’re going to let guys play and get their way into the game. But if anything were to occur and we needed to get our team jump started and get going, we feel like we have two guys that can get it done.

2. I think everyone is pretty happy with the idea that Tony Morales is finally getting his shot. We all sorta thought through most of the spring that Justin Murphy would be “the guy” at right tackle, but Baylen Brown made the push and that meant that Tony flipped to right guard. I’d like to see Tony play alongside his brother. It’s something that I’m sure that they dreamed would happen more often than it has thus far, so I’m excited to see that happen for him.

I think so. He’s a guy who can speak from experience about appreciating each day, each practice, each time you getting to out on that field. So guys see that. They see what he’s gone through, and it definitely, I think, sends some inspirational messages when they watch him trot out there.

3. Kingsbury talked about the intentional nature of the quiet spring and fall, which is fine by me. I’ve always sorta felt that it’s not the coach’s job to create content. Either way, I think that with the quiet offseason, it’s created this conflict with some fans. It’s difficult to find a happy-medium with these sorts of things. Still, Kingsbury said that it really doesn’t matter unless it happens between those white lines on the field.

I hope we are. I think it’s just talk until you go out there on Saturdays and do it. So that’s kind of where we’re at. We put a heavy emphasis as a staff, program as a team, to get that aspect of our program right. But until we do it, it’s just talk.

4. I don’t think that Kingsbury’s stance on the defense has changed all that much thus far this spring. He’s continued to say that he felt that David Gibbs added a sense of professionalism and discipline to the team. Kingsbury echoed that again today.

5. Someone asked Kingsbury about Mike Mitchell because everybody is worried that he’s not on the two-deep and I did think Kingsbury’s answer was intriguing:

No, he’ll play Saturday. It’s just Mike’s, you all put a lot on Mike, and rightfully so. He’s a big-time recruit, very physical, very athletic, so we just kind of put the guys that have been here and rolled with it.

You all have put a lot on Mike. That’s interesting to me and I tend to think that Kingsbury isn’t being critical to you all, but the expectations of a guy who might still be figuring it out a bit. This also makes me think that the depth chart that was released did err on the side of veteran players. There are no freshmen in the offensive line two-deep, sans Justin Murphy, and there are very few freshmen that made the cut in other places.

6. And this isn’t just Kingsbury talking about it, but Gibbs says it too. When asked about who earned the top tackle spot, Gibbs pretty much dismissed the need to answer it because he really is going to play a lot of people, so don’t get caught up in who made a two-deep:

They’re all going to play. I promise you they’re all going to play, and regardless of who steps out there first, and I realize that you all have a job to do and you’re just trying to report it correctly, at the same time it could change by game time. We’ve got, shoot, like I said before, we’ll play five or six inside guys, and five or six defensive end rush guys so they’ll all be in there, they’ve practiced really hard, had good training camps. Like I said, I’m excited to see those guys get out there and run around.

7. Oh, and wanna know why the players are talking about staying in their gaps, well, Gibbs probably is probably hammering home the concept of staying in your gap because he ain’t playing around with taking your tail out if you don’t do your job.

Well, we have this thing going, competition going on daily in practice and Coach Smith and myself and Coach Kingsbury will sit down and decide who is going to start. Then it comes down to when you get in the game are you productive or are you doing your job, are you jumping out of gaps? And I think in years past if they jumped out of a gap it was okay. I don’t have a problem with that, because being a defensive back coach or linebacker coach or back end guy, if the front four guys won’t stay where they’re supposed to stay you can’t coach those other guys to do their job. So I think it all depends. The flow of the game obviously will dictate some playing time. But we’re going to roll them and try to keep them as fresh as we can.

8. Gibbs was also asked about moving some guys in the secondary around and he pretty much acknowledged what we all very well think when a player moves from one position to another.

It does. I mean, they have versatility, but it’s the same old problem. Are you moving them because they weren’t very good at another spot so you’re going to move them to another spot? Or are you moving them because you have somebody better beating him out at that spot? It’s a fine line moving guys around. You better have somebody better than them or it doesn’t do you any good to move them. So we’ll see. We’re a work in progress. We are by no means a finished product defensively. But, you know, not that you all would expect anything else, but these kids will go out there, they’ll fight, they’ll compete. And like I said, I’m excited to go out there and watch them run around.

Gibbs gets “it” for me because although we don’t have to say it, we all know we’re thinking “so you wanna move J.J. Gaines to cornerback despite the fact he’s played safety for three years?” and Gibbs says, well, yeah, because I’m trying to make the team better. At the very least, and maybe this isn’t solace for you, but it is for me, in that this is a very conscious decision when a player is moved. It’s not some sort of whim.

9. I didn’t understand the question, but someone asked about how the pistol formation stresses defense and Morris answered.

Yeah, I mean, one thing it does it takes some of the old I-running game, schemewise we can put it in. History repeats itself in football. Some of these new pistol plays you turn on and 20 years ago the Broncos were running it, and it’s just out of a different formation. So now we have Quinton White like an old fullback and DeAndre like Terrell. What was Terrell — Terrell Davis who works for all those yards. So it just helps us with our angles. It lets the running back see things develop a little bit better out of it. You can get some full stretch out of it and get linebackers running sideways and it gives them angles to cut back on. So it’s just an extension. We’ve done a lot of studying, a bunch of old run game, studies some of Nevada’s pistol stuff in the off-season and some of the older Denver Broncos stuff because some of the scheme really matches up together.

Hey, this is probably just a coincidence, but anyone find it odd that Morris is talking about the old Denver Broncos and Terrell Davis and the zone blocking scheme that a particular football coach with the last name “Gibbs”, first name “Alex” and just so happens to be the father of David, the defensive coordinator currently at Texas Tech? Me neither. Anyway, we really didn’t see the Pistol formation much, if at all during the spring. At least I don’t recall that, but now Morris is talking about looking at some old Nevada film and how the Pistol helps the running backs see things differently. I was interested with Neal Brown toyed with it a few years ago and I’m still interested now. You can take my dollar.

10. The thing that I’ve been most worried about is something that Morris recognized needs to be better, which is the outside receivers making cornerbacks pay for press coverage. That didn’t happen until Bradley Marquez was flipped outside and then, magically, Devin Lauderdale started to make some plays. In any event, Morris knows the outside guys have to get it done:

Just throw them a lot. That’s just something repetition. People ask all the time how you get better at catching the football or doing these things. So that’s what we’ve been working on. One thing that sticks out is we weren’t great against press coverage last year on the outside on some of the deep balls. And we’ve gotto win against press man outside. It’s part of this offense. It’s been that way forever and that’s something we are going to continue to check too. So it’s something that we’ve drilled them on a ton. We know no other way of getting better at it than to actually do it. So the quarterbacks are doing a great job throwing it, and throwing it behind, throwing it over the top, so our timing is better. I think that’s just from some older, mature quarterbacks that have done it and learned from their mistakes. But, yeah, you’re right. We’ve got to capitalize on some of those deep balls.