Your seven point preview of South Florida vs. Texas Tech. 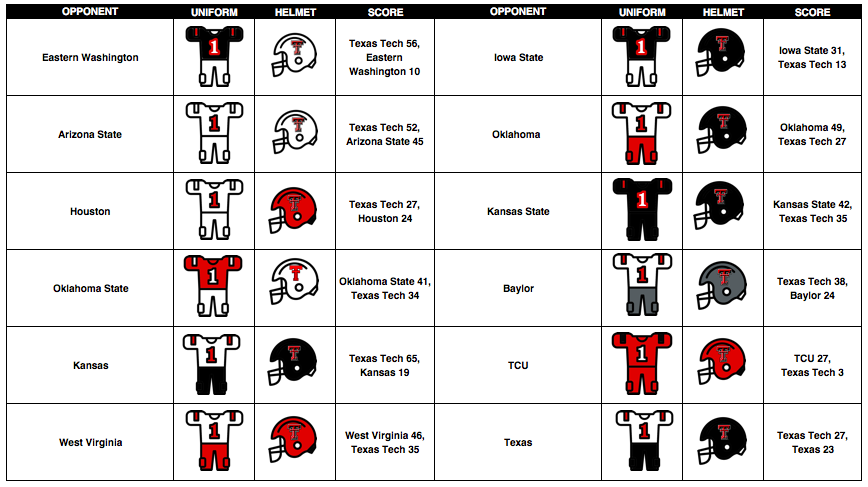 Well, we got here and I’m not sure what to do with my hands. The big push at the beginning of the year was for Texas Tech to get to a bowl game, by hook or crook, and now, Texas Tech will play South Florida tomorrow in the Birmingham Bowl. I’m sorta worn out at this point, I tend to always get a bit burned by the end of the year because of the hectic nature of running a blog, a life and just about everything else that’s associated with getting out fresh and quality content each and every day.

The one big storyline, at least for me, has to be how Kingsbury pulled off what seemed like the improbable, winning that 6th game to get bowl eligible, something that lots of folks thought that Kingsbury needed to do to keep his job. I thought that 7 or 8 wins was a necessity, but I’m fine with being wrong. I’ve written numerous times that I really like Kingsbury, I am a huge fan of his and can’t tell you how much I like having him as the head coach.

Perhaps a close second would be re-upping David Gibbs to a two year deal, which perhaps implies that Texas Tech is maybe married to this arrangement with Kingsbury and Gibbs for the next two years. The retention of Gibbs was important to the continuation of this process.

I’m sorta saving these two ideas for a greater discussion in the offseason, but a week or so ago I was listening to Ken Hitchcock, the head coach for the Dallas Stars on DFW’s The Ticket with Bob and Dan and I was really struck about two things that he said (In all actuality, I was struck by a handful of things he said and it was one of the best interviews I’ve ever listened to, not even joking and you can listen to the entire thing here.).

1. The first thing that Hitchcock discussed was that the biggest difference between players now and “then” is that you’ve got to give the players a reason for doing what they do. Players today are more invested and just telling a player to do something without explaining why it’s important to do it is the biggest difference between the players that are playing now and that played when Kingsbury was a coach. I can’t verify any of this because I’m not in the rooms, but I just thought that this really simple difference between players was incredibly accurate. Players just want to have some skin in the game and that makes a ton of sense to me. Give them purpose and reason and you’ll conquer the world.

2. This second point was the real kicker and hit me like a ton of bricks. Buy-in is a huge part of coaching, having the players buy-in is incredibly important. Here’s the kicker: Buy-in becomes real when the players start to sound like the coaches and buy-in can only happen when there is consistency with coaching. This is a pretty logical thought and by itself, you’re probably saying, yeah, sure, I’d agree. Here’s the deal, you can’t really have buy-in without consistency and you can’t have buy-in unless you’re willing to explain item #1 above. I would guess that most coaches don’t see the need to do item #1 above because most coaches are wired in that they don’t need to explain themselves, you’re going to do this because I said so. Maybe, after 5 years, you finally have buy-in with the players because they’ve figured out the rhyme and reason for what Kingsbury and Gibbs do, either on the field or as disciplinarians and running the program overall. Without the team buying-in you’re not going to have much of a team at all. Again, I’m saving “buy-in” later for the offseason, but I thought that this was pretty profound.

This won’t be your normal “what to watch” but enjoy these two things.

Outside the Huddle with T.J. Vasher. We get to hear from the young receiver.

7. The Line and Prediction

OddsShark has South Florida as a 3 point favorite heading into the game. As mentioned yesterday in the stats preview, South Florida has huge statistical advantages, but those advantages may have been negated by USF’s strength of schedule. There’s part of me that thinks that Texas Tech really won’t be able to handle USF’s speed, but I also don’t think that USF can really handle Texas Tech’s passing game. So, the 3 points is probably appropriate. The only other thing that really bothers me is the pending rain and that’s likely to hamper Texas Tech’s possible passing advantage and enhance USF’s rushing game. I’ll take Texas Tech by 3, something like 33-30, because my opinion doesn’t really count.