The Morning Stake is brought to you by DiamondStuds4Less.com. Enter promotional code RedRaider15 for 15% off your diamond jewelry purchase, including custom orders.

End of Season. Man, what a run. For the first night since the Christmas break, I didn’t write at night. After yesterday’s game, I didn’t get out the computer, I just relaxed. I’ll need to do a game recap, I guess. I dunno that I need to do anything, but I’d hate to not put a bow on the final game of the year for what has been an incredible run. I’m sure I’ll have more to write about this team and what they did, but I needed some time to take a break. It’s been a helluva run.

Series Sweep of Northeastern. You can check out the Northeastern series thread where the baseball team went 4-0 on the weekend and scored a record number of runs, pretty much demolishing Northeastern in each and every game. The Red Raiders will play in Las Cruces on Tuesday and then return home and Big 12 action to host West Virginia over the weekend. Northeastern was not a quality opponent, or maybe Texas Tech really needed to get back home and get their feet under them a bit. The offense was a bit stagnant on their long road trip in early March, but they appear to have turned things around in this series.

texas Tech Falls to Villanova. I mentioned above that I don’t have a ton to write about now, but I did want to highlight the post-game words of head coach Chris Beard and Zach Smith. This is the opening comment from Beard:

CHRIS BEARD: Just want to congratulate Villanova on a tough, hard-fought game, and wish them the best at the Final Four. In preparation, we knew they were a great three-point shooting team and talented players, but we also knew how tough they were. We knew the identity of their team was the toughness and physicality, and that proved to be true.

Just want to congratulate them on a great season. And I just want to recognize our team. I’m just so appreciative of our seniors during the coaching change and sticking with us. And to almost get to that final weekend, I think, speaks a lot about those guys, their character. Proud of our five seniors.

And then I told our young guys, we’ll do everything we can in the next 364 days to be back here.

And here’s Zach Smith on what Beard told the seniors at the end of the game:

Q. Zach, toward of the end of the game, obviously, Coach takes out all the seniors, and he shares a moment with you all on the sideline. What did he tell you?
ZACH SMITH: He just told us how much he appreciated the journey, how much he loved us and appreciated us for sticking with him.

Can’t wait to see what Beard does with with the final two spots for the 2019 recruiting class (you get 13 scholarship for each year).

Four Players Arrested. This broke Sunday morning, where four players were arrested at Bash’s after some sort of altercation. We have a few more reports surrounding the event and I have a question here shortly. To summarize, Jett Duffey, Christian Taylor, Desmon Smith and Quan Shorts were all arrested and Duffey and Taylor were charged with criminal mischief. A-J’s Don Williams reported that a patron of Bash’s went to go get a firearm after some words were exchanged with some of the football players and a group of individuals were impeding traffic:

When officers arrived on scene to look for the possible armed suspect, a group of people in front of the nightclub were impeding traffic.

“After attempting to locate (the) armed suspect, an officer observed an individual intentionally cause damage to a vehicle by smashing the windshield,” Whitley stated in the release. “When officers tried to arrest the suspect, the crowd became aggressive toward the responding officers.”

I’m also embedding this tweet, which is a walk-on player maybe who was videoing Jett getting arrested.

#TexasTech QB Jeff Duffey getting arrested for punching a hole in a wall after seeing his other teammates get arrested. @TexasTechFB #TexasTechFB pic.twitter.com/WQklnij3KT

I’d suggest you watch it while you can. I also want to comment on the guy shooting the video and the conversation he had as part of that tweet. 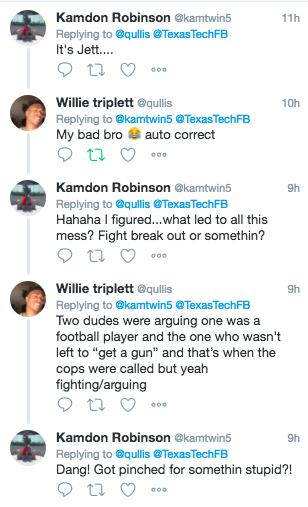 So, here are my questions. The football players are at Bash’s and a patron there has words with the football players and the football players all stand up for themselves. Notice that none of them are arrested for drunken and disorderly conduct, so we’re going to presume that they may have been drinking, but they weren’t arrested for being drunk. The Bash’s patron says that he’s going to go get a gun and the police were called. Back to Don’s story, where perhaps the cops said that they were going to arrest the players involved even though they didn’t do anything wrong. Taylor reacts by hitting a windshield and Duffey apparently knocked a hole in a wall.

Duffey wasn’t drunk and gets arrested for punching a hole in wall for his friends getting arrested (perhaps with cause). Does Duffey deserve to be kicked off the team for that? That seems a bit harsh and I think I’d like a better explanation of Taylor smashing the windshield, but it appears that the crowd was angry that maybe the cops were maybe arresting everyone even though they weren’t the individuals who provoked the police being called.