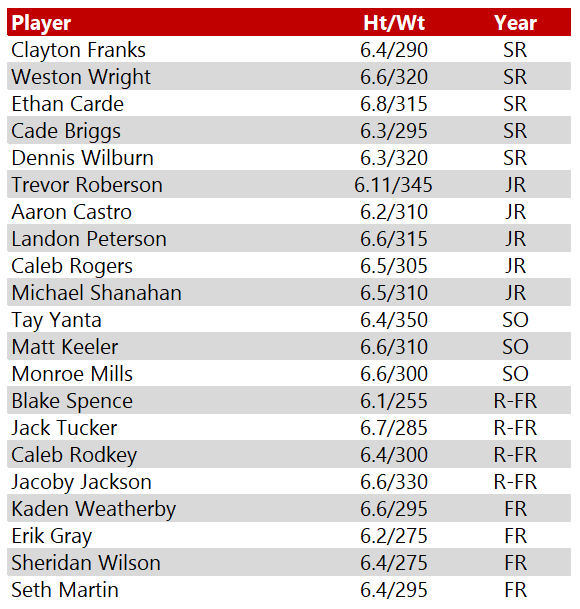 Essentially when Joey McGuire arrived he said the offensive line needed help. Immediate help, not the type of help that needs development. With Dawson Deaton, Josh Burger, and T.J. Storment moving on due to graduation or the NFL, there’s going to be some movement here.

I think that Wright, Peterson, and Rogers will likely start or get the chance to start along with possibly Carde, although I’ve never been a huge fan, but am willing to see any improvement. As an FYI, Larry Moore, who was moved to defensive tackle by this staff, was the first back-up to both tackle positions and not Carde, so I’m not certain as to the development of Carde, who had originally split time with Rogers when they arrived.

Also arriving via transfer is Briggs and Shanahan and I think those two can be penciled in as starters, Briggs inside and Shanahan at right tackle. Depending on who the staff wants at center, I think that Rogers and Shanahan are your tackles with Briggs, Peterson and Wright some combination inside. Wilburn played center at JUCO college so I wouldn’t rule out that option either.

You’ll note that there isn’t a ton of depth here, at least in my opinion. Prior to the arrival of Shanahan, there were only 3 scholarship juniors. There’s maybe 1 or 2 scholarship sophomores as I’m not sure if Mills is on scholarship or walk-on, but Keeler would be the only scholarship there if Mills isn’t. Only 2 redshirt freshmen in Tucker and Jackson. Again, this is not ideal roster management in my opinion and my guess is that Wells was going to comb the transfer market, but there’s something to be said for development of players as well.

The good news is that in addition to Briggs and Shanahan, McGuire also added Gray and Martin to the 2022 recruiting class along with Weatherby and Wilson who committed under the Matt Wells regime.