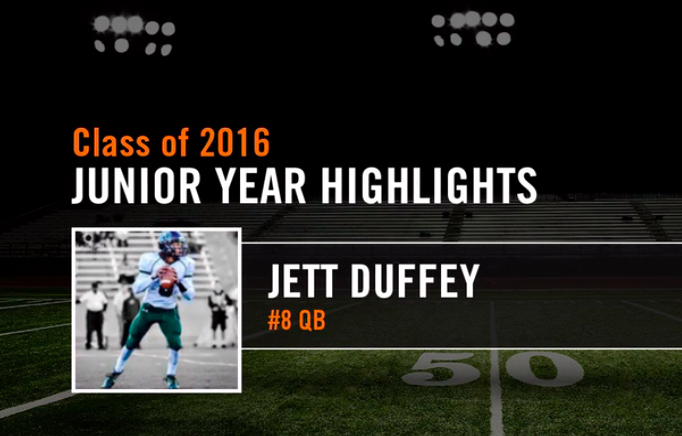 Duffey is a 3-star quarterback and this very much bucks the trend of Kingsbury offering just one quarterback and chasing that quarterback to the ends of the earth. Now, Kingsbury has three uncommitted offers out there, Jalen Hurts from Channelview and Patrick O’Brien from the Hills of Capistrano.

Duffey has offers from Air Force, McNeese State, Nevada and Southern Illinois in addition to Texas Tech. Duffey is significantly much more dual threat, rushing for 1,103 yards, 19 touchdowns and threw for 2,259 yards, 20 touchdowns, 10 interceptions and completed 56% of his passes. Duffey is a lot more silky-smooth on his runs and his passing needs a bit of refinement, throws off of his back foot a bit much, but he can throw the ball. And he’s fast. Real fast. One of the reasons why Duffey is seeing increased interest is because he won a Elite 11 competition in Charlotte and is headed to the finals in July.

Someone asked in the comments if Kingsbury and Texas Tech are abandoning any of the prior offers that are out there and I think what you’re seeing is a shift in philosophy, perhaps, which is that you can’t afford to have just one offer out there and you’ve got to give yourself options because they may not choose you.  I’m good with this, essentially making it a competition, like any other position, and Texas Tech and the staff will take the best one.  I should add though that we’re in an evaluation process too, which means that the off-the-radar guys who are coming off of solid junior campaigns are getting known, and the more well-known guys, like Hurts, the coaches have known about.  Guys like O’Brien and Duffey are coming on strong because of these summer camps and Texas Tech will have some of their own in June.