Your 2,000+ word preview of Texas Tech and Kansas.

The white pants finally lost. Let’s get back on the right side of the ledger. 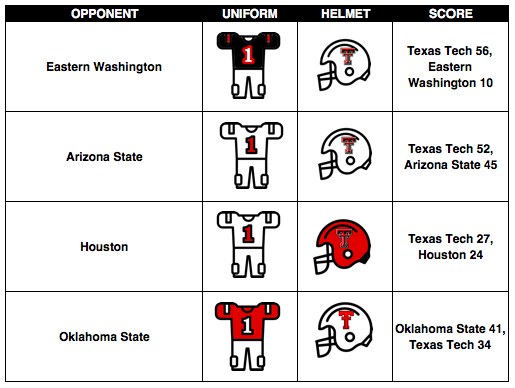 I have a sneaking suspicion that Texas Tech is going to come out on fire against Kansas. Kansas actually has some pretty good players on defense (Armstrong, Dineen and Wise) and the offense will move the ball on you, particularly behind their running back who has been terrific.

But the one thing that I don’t know that this team has previously had was a guy that was going to drive the team. A guy that pushes and prods a bit. A guy that keeps everyone in line. this guy in sports is pretty rare and I’m not completely sure that Shimonek is that guy, I suspect he is. The only guy that I know of that’s like this is Adrian Beltre (I know there are others, but my frame of reference isn’t great), the Texas Rangers third baseman. He is known more for not wanting his head touched.

I’ve often wondered what “it” is that makes up this sort leader. I think it’s absolutely someone that plays through injury and I don’t mean some sort of minor thing, I mean an injury where Beltre can’t run, but is still in the lineup. He’s a sure-fire Hall of Famer, so he’s good and he can back up any discipline that he enforces. And maybe that’s the thing that Beltre does, which is that he keeps the room in line. Beltre makes sure that everyone is doing exactly what they’re supposed to do.

With Shimonek, he’s said before that he’s the guy that likes to hit like a linebacker but knows he cannot. There’s the story which may be more rumor than anything else, which is that Derrick Willies and Shimonek got into it ith Nigel Bethel (this was resulting in Willies’ broken hand last year) and Bethel is no longer here while Shimonek and Willies are.

Shimonek is incredibly critical of himself, telling Kingsbury that he didn’t want a scholarship unless it was earned and as far as I know, that only happened this year.

For games like Kansas where maybe the motivation isn’t as high as it would be for other games, especially for an 11:00 a.m. game. Let’s hope that Kingsbury and Shimonek have worked out any kinks and let’s get this game started with the foot on the gas.

Kansas can’t stop anything in terms of running the ball. If you want to take the temperature of Texas Tech’s running game and here it’s at, then this is the game. If Texas Tech cannot run against Kansas, then I don’t know that they’ll be able to run against anyone the rest of the way (this is clearly an overstatement).

They also do a very good job of running up the middle. There aren’t many highlights that show big plays anywhere else hen they run the ball, but that Kansas running back will hit the hole and if the linebackers aren’t there, he’s gone.

Bender has a very good deep pass and arm and it will be something to watch after Texas Tech had issues with Oklahoma State’s receivers, but Kansas will try to get these guys one-on-one.

The missed tackles are horrific.

The interior of the line is doing a fantastic job. Seriously, that’s going to be key. The pass defense is pretty atrocious too and maybe that’s another good thing for Texas Tech.

The one play where the fullback simply gets around the edge and the Kansas defender simply cannot catch him and that’s a fullback, who may be fast, but again, I’d like to think isn’t as fast as other running backs. The key will be the offensive line making sure that they actually block down.

The pass protection can be suspect too.

Oh, geez, the pass defense, the secondary is just leaving guys open. Like 10 yards open. If Shimonek has time, he’ll be able to make plays.

Bender will force the action. He did that against West Virginia and here as well.

Kansas won’t stop until the final bell goes off, so don’t expect them to just give it up.

Q. How does a bye week help your defense when you’re facing a team with such flashy offensive numbers?

DAVID BEATY: They continue to do that. I think it’s getting people healthy, getting people back and healthy. That’s big. It allows you to look inside your personnel and see if you got guys in the right spot. Would he be suited better for another spot, would he be better suited right where he’s at and we just need to improve his technique where he’s at? The bottom line is execution.

We talked to our guys at length about the difference for us right now is going to be focus and being able to focus by controlling all of the exterior things that go on in our life. Can we focus on academics and football? If those are the only things that we’re having to deal with, we’re going to come okay focusing and being able to improve our execution, because at the end of the day it’s going to come down to who can execute best.

Q. You touched on turnovers. They’re (Texas Tech) plus 7. What is the key to forcing turnovers?

It’s a tough — it’s a tough chore because there is so much that goes on offensively that you’ve got to be able to be sound in some area, and then you gotta rally and live through some other things, and not give up points while you’re doing it.

It’s definitely a challenge. I mean, it’s one of those deals where, you know, you watch the tape and you know way too much. Like, man, that was a good idea, oh, man, that was good! I remember we did that against this team, that was pretty good. You kinda start making a list of things you’re like, man, we got to be prepared to stop this, this, and this, and then you start realizing that your rules — they’ve got to just handle it all, right? They’ve got to handle it all.

There’s gotta be some things that you’re going to have to be committed to stopping and then there’s going to have to be some things you live through and be able to get back to what you’re committing to stopping; right? Because everybody is going to live on what they do, and they’re going to do the same things they always do. We’ve got to live through some of the tricks, I think, because they do a good job of capitalizing on tricks, formations, things like that.

Q. Did you have time during the bye week to handle slow starts and what do you put your finger on as to why those are happening?

DAVID BEATY: We did. I really didn’t need a lot of time during the bye week to realize what it was, but it was good to go back and see it again and, again and, again and a lot of it is just things that come down to execution and self-infliction. Slow starts offensively you can almost track every one of them back to a mistake and a penalty.

If we don’t do that, we don’t have a 5-yard penalty and false start, we’re going to be wind up scoring some points and getting off to a quicker start, right?

How do we fix it? What do we do to try to move forward and not letting that be an issue again? We started infusing this thing into our practice called “fast start” where right after we get done with a portion of our practice early, we go right into a team session and we see who is ready to play. It’s not a whole lot of plays, but we get four or five shots with the 1’s and 2’s, and gives us a chance to see who we need to yell at for the rest of the practice and who is ready to play and who is not.

That’s something we think is starting to get into their minds about the importance of a fast start. Who can execute early at the very beginning, being ready to play early and not waiting for things to happen.

Q. How does Kingsbury’s mind work?

DAVID BEATY: He’s a unique guy. He’s very, very intelligent. One of the nicest, softest spoken dudes I’ve ever been around, but very, very, very intelligent. Might be one of the hardest workers I’ve ever been around. I think his alarm goes off around 2:30 in the morning, and he’s probably at the weight room by 3:30. There is a reason why he’s not much younger than me, and he looks a heck of a lot better than me. He puts a little bit of work into it that I don’t necessarily do. No, he’s a stud. He works extremely hard at everything he does. He’s in that office — he beats everybody to the office all day, every day.

I mean, he’s just a guy that’s very unique, in that he’s a humble, hard-working dude. I love rooting for Kliff every week but one, and I’ll give you three guesses as to which week that is.

The 16 point spread is maybe a bit too much for me, but I do like Texas Tech by two touchdowns I think. I’ll take the Red Raiders by something like 45-30. Let’s just get that win.