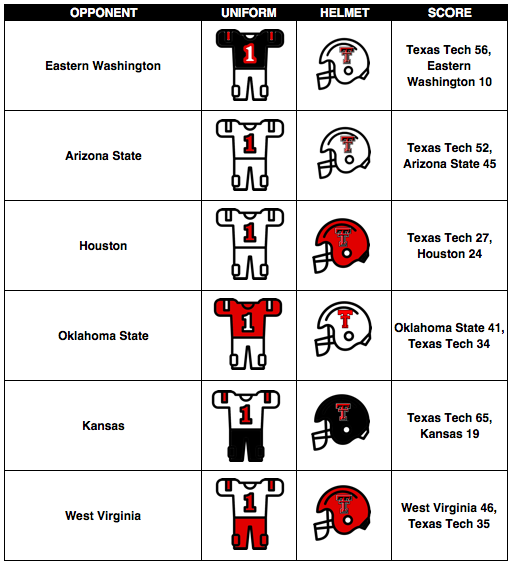 Since I didn’t get to Ten Things on Saturday, this will serve as a good place to get out some of those thoughts still running around in my head six days after the fact. Iowa State and Texas Tech are two pretty evenly matched teams and Texas Tech should be favored to get this win. I mentioned this to the group, that Football Study Hall has Texas Tech with a 34% chance of winning 7 games, 25% at 6 games and 23% at 8 wins. FSH is predicting wins against Iowa State, Kanas State and Baylor with Texas favored (as of right now) just slightly. Connelly thinks that Texas Tech has a 90.2% chance of finishing 6-6 or better. Don’t give up hope. Not yet anyway.

I know that the West Virginia loss has beaten some of you up, and rightfully so. It was a tough loss to stomach because of how it happened. Playing so well and then just falling off, on both defense and offense.

The thing I’ve been most impressed with this year has been this teams ability to bounce back from bad things. This team bounced back from the Oklahoma State loss with a drubbing of Kansas, on the road at at 11:00 a.m. I know it’s easy to overlook beating Kansas, but they had just played West Virginia relatively close and were coming off a bye, a full two weeks to prepae for Texas Tech and they were absolutely hammered. I’m not at all suggesting that Texas Tech is going to hammer Iowa State, but I do think that there’s something to this team responding. They’ve typically been pretty quiet about what they do.

It seems as if Kingsbury is running a lot of plays with a tight end and that’s a hand on the turf tight end in Donta Thompson. They’ve mostly been running plays, but in looking at the personnel at times during the game, Texas Tech is running a tight end with a fullback and a running back and that’s a pro-style offense. Someone mentioned to me that this doesn’t work as well unless Thompson catches a pass and as of right now, Thompson hasn’t done that. But it seems that Kingsbury tends to have a long game in play lots of times. Those 12 personnel sets have typically been running plays, but don’t be surprised to see that change in the near future. I’d guess that Kingsbury is setting something up for later in the year. That may be this week.

One other thing to watch, is how this team is really regressing as the game continues, on both offense and defense, via Football Study Hall:

Those numbers don’t have to mean very much other than on 1st and 2nd down, this team is pretty spectacular on offense and in quarters 1-3, this team plays really well, but there’s a drop off, on offense and defense and they’ve got to reverse that trend this week.

Iowa State took advantage of short fields and had some pretty terrific special teams play that helped them along the way. A punt return for a touchdown, a missed snap on a punt for Kansas that resulted in a turnover of downs. was huge in breaking open what was a rainy game.

You really don’t get the true sense of how good a team is playing against Kansas because Kansas can’t tackle for the life of them. Texas Tech used to look like this, but there’s just guys missing completely and it’s not necessaryily anything complicated.

Iowa State will come off the edge and they’re really pretty fast along the line, but just like any other team, they’ll get burned because they blitz.

The interior of the defensive line may not be as stout as I previously thought. There might be opportunity to move some folks around.

I’m not putting anything into the horrible passing performance by Park because I don’t think that’s reflective of what Iowa State is doing right now.

Shimonek is going to need to be calm and collected because the Cyclones will absolutely force that pocket and Shimonek has to be ready to step up and deliver the pass, but he can’t bail early.

The edge players for Iowa State really are impressive, those tackles for Texas Tech better be ready.

Iowa State proved to be a resiliant team after Oklahoma got out early.

The offensive line looks really mobile on all of these highlights. A nice mobile group for sure that is seemingly doing a really nice job of pass protection.

Iowa State has more speed than you think they do. They’ve got really good athletes.

I couldn’t find any quotes from teh coaches. I found video (Sometimes I hate only having video. I like words.) of the coordinators and the head coach talking about the game, but no quotes.