A preview of Kansas State and Texas Tech.

I don’t think anything has been repeated yet and no all-black just yet. 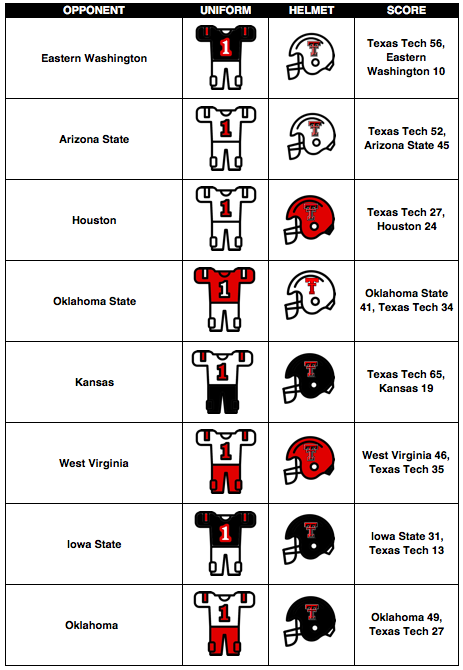 Bowl game or bust. Like a lot of you have echoed this week, I think this game pretty much determines if Texas Tech gets to a bowl game. Win this game and then beat Baylor, which is becoming more difficult as the season progresses and that bowl game is pretty much all but guaranteed. The last two games will be difficult, hosting TCU in two weeks or so and then traveling to Austin to play Texas.

The big question is whether or not six wins is enough to allow Kingsbury to get his job. I don’t know that I have a good read on this situation, particularly because I think that Hocutt would very much like to keep Kingsbury as the head coach. There may not be anyone more in the corner of Kingsbury than Hocutt.

I also know though that Hocutt is beholden to his shareholders, the fans and those season tickets. There’s lots of people that really believe, and rightfully so because it’s just an opinion, that if we give up on Kingsbury too quickly, then we’ll regret it when he goes somewhere else and absolutely dominates. This really does go back to the premise that Kingsbury was probably two years too early to be a head coach. Part of being a head coach is who you know so that you can pick the best assistants, not just the assistants that you know. When you have that limited circle, then that limits your ability to find guys to implement what you want to do.

The first staff that probably wasn’t ready to be in the positions that they were in plus Kingsbury not focusing on the defense really at all for four years was obviously problematic. He maybe would have assessed the Wallerstedt situation a bit earlier [As an aside, it was funny mentioning Wallerstedt to the K-State guys at Bring on the Cats during the podcast and they reminded me that Ron Prince hired Wallerstedt. Ron. Prince.]

That delay move on the kickoff return was flipping awesome and the coverage teams for Texas Tech had better be focused. Kansas State plays the field position game better than pretty much any team in the country . . . the delayed linebacker blitz was really fast and that’s where not having any protection in for Shimonek is a killer because he simply cannot escape something like that . . . the way that the offensive line turns that Kansas defense is pretty impressive on that short touchdown run. The offensive line gets their bodies right and the Jayhawks really didn’t have a chance . . . maybe part of the problem for Kansas State is playing that base 4-3 defense . . . I think over the top is where Shimonek is going to have to go and that means that the wide receivers are going to have to get open, K-State will drop those linebackers into the middle of the field and that’s what Iowa State did, can’t be afraid to run the ball and check into that play . . .

That first play was going to be a 7 yard run but the running back turned it into so much more, but the offensive line had a great push . . . the K-State quarterback really does like go go deep . . . notice how that quarterback can run, this isn’t some slow guy that’s not willing to take a hit . . . the defense does have a problem with OU’s play-action, it would be nice to utilize this . . .

The K-State quarterback is pretty mechanical when it comes to running the ball . . . K-State will turn you over . . .

“I have mentioned it. I know it is on their mind and I know their aspirations to do some of the things they were excited about earlier in the season do not exist now. A bowl game is certainly a reward for some people and the program. They understand that. They want to go to a bowl game and they understand what they have to do in order to make that happen.”

“For a young quarterback, he has a good deal of poise about him and seems to have a very good understanding about what they do at Texas Tech. He throws the ball well and he can run it if he has to. He is not the fastest youngster in the world, but he can currently run the ball and bring it down and scramble. They throw the ball around an awful lot. He throws it enough in practice and in games. He has an exceptional amount of experience as it relates to quarterbacks in the nationwide scope regards to how much they throw the football.”

“It is hard against anybody no matter who you line up and play against. It is always difficult against Texas Tech because they get the ball out of the quarterback’s hands as soon as they possibly can. That is where the coverage comes into place. If you have receivers covered well, then they have to hold the ball a little longer and you can get more pressure on the quarterback.”

On his most memorable Halloween costume…

“I was so well prepared to answer that because I knew it was coming. The only one that I can remember was having a bandana and a cowboy hat when I was little toot. We couldn’t afford costumes, so my uncle had a cowboy hat that he gave me. I do not know where I got the bandana. So, I would go door to door with a sack and my bandana and I was a cowboy.”

[If every K-State fan isn’t dressing up as young toot Bill Snyder with a cowboy hat and a bandana then I don’t even know what to think.]

On the success of the running game the past two weeks…

“I think the young guys up front are blocking well for a good portion of the time. The quarterback has been able to run the ball well, and the running backs have done a decent job as well. The better we execute things and the better we can throw the ball, probably the better we will run the ball. We didn’t two games against (against TCU). Against Oklahoma we were able to throw a couple of deep balls, which assisted our running game. Last week we didn’t throw a great deal, but the percentage was high. The fact that you put Alex Delton on the field or Skylar Thompson, there is the threat that they can throw the ball. Then people have to defend both the run and the pass, so that gives us a better chance to run it.”

I’m going to take Texas Tech, but I think this is another one of those coin flip games. I hope like heck it doesn’t come down to the kicker because I just don’t know how ready Hatfield is. I mentioned on the podcast that I thought this would be a 35-38 sort of game and I’ll take Texas Tech at home because I’m a homer.